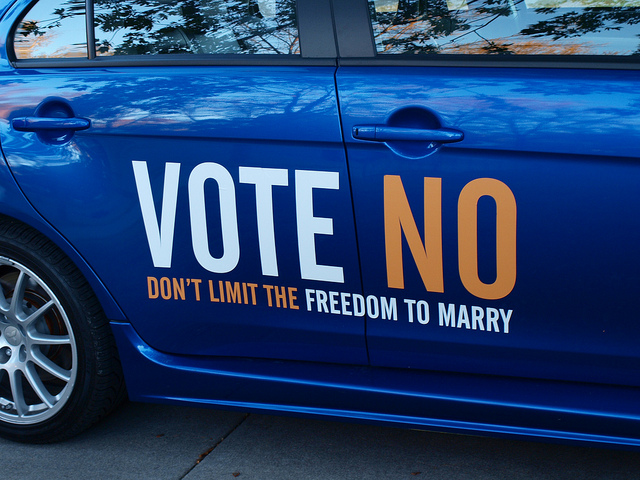 What is one of the best — or worst — parts of election season? Bumper stickers.

For decades, the rear bumpers of our vehicles have told the story of where we stand politically. The names of our preferred presidential candidates have been emblazoned on the backs of our cars, our trucks, our SUVs. Statewide or local candidates we favor the most – even causes we believe in – also take up space to let motorists behind us know how we’ll vote on election day.

Bumper stickers can be a great barometer of public opinion. Seeing more stickers for one particular candidate or ballot measure can indicate where the polls are going.

LGBT motorists have this down to an art. And with a ballot measure on our ballot that would permanently end the fight for marriage equality, you can expect us to step up support for our side.

Here in Minnesota, the measure to codify the state constitution and make the traditional definition of marriage permanent has electrified the LGBT community. Just looking at the number of vehicles with “No” bumper stickers opposing the amendment, our community and our allies seem to be winning. However, the polls conducted by various media outlets across Minnesota tell a different story: the measure is currently too close to call.

And so, our team has had to step up its game. Leading the charge: Richard Herod III. He took the “Vote No” message off of the rear bumper and made it larger than life. Herod’s idea began as a response to a rule imposed against him – right at his home.

In late September, Herod’s townhome owner’s association asked him to remove a “Vote No” yard sign from his lawn, citing one of the association’s rules. While fighting the association, Herod decided instead to display the same anti-amendment stance on his own Mitsubishi Lancer Evolution.

The townhome association changed its ruling two weeks after sending the letter to Herod, allowing yard signs. However, the decal job on Herod’s Evo took on another life entirely.

After Herod posted a photo of his Evo with the “Vote No” message, some of his friends asked how he did it – and if they could get decals for their own vehicles. Subsequently, a photo of Herod’s blue Evo was posted on the Facebook page of Minnesotans United for All Families. That picture and Herod’s accompanying story have more likes than any other story on that page this month. By mid-October, Herod’s post has earned nearly 900 likes and over 70 shares. It was named one of the Most Liked photo on the popular social media networking site during the month of October. 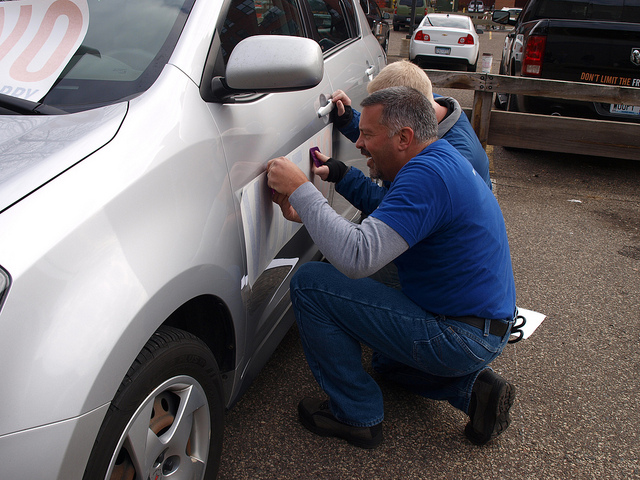 On the first day I caught up with Herod, he was doing five different vehicles at a friend’s home in Minneapolis. So far, Herod and his friends applied decals on well over 200 vehicles in the Twin Cities, Duluth and elsewhere in the state.

The decals begin as a vinyl adhesive that is applied to the vehicle. Applying the decal requires patience and planning to ensure that the three parts of the kit fit on the side and back of the vehicle. The rear part – the tag line for the campaign – is designed to fit on back windows, bumpers or on the trunk/liftgate.

The decals came in three different kits, depending on the color of the vehicle. After the election, the decals can be removed with help from a hair dryer.

There was a fee for the decals themselves, but Herod donates his time to apply them and will give a donation to Minnesotans United for All Families. On Thursday evening, Herod presented a check to Richard Carlbom, the Campaign Manager of Minnesotans for All Families, for $17,000 from their efforts along with matching funds from various donors.

According to Herod, response to the decals had been overwhelmingly positive and supportive from within and beyond the LGBT community. For the past few weeks, Herod organized wrap parties for additional vehicles getting the “Vote No” treatment to caravans traversing the Twin Cities and beyond. Another caravan was seen prior to the amendment debate at the Fitzgerald Theater in St. Paul last Thursday evening.

There had been isolated incidents involving vehicles that were wrapped. The latest came when an Acura TL wrapped with the decals had a rear tire slashed in a ramp in downtown St. Paul on Saturday evening. The vehicle owner attended the Madonna concert at the nearby Xcel Energy Center when this incident occurred. Other incidents surmounted to some applying of “Vote Yes” bumper stickers on a couple of wrapped vehicles. 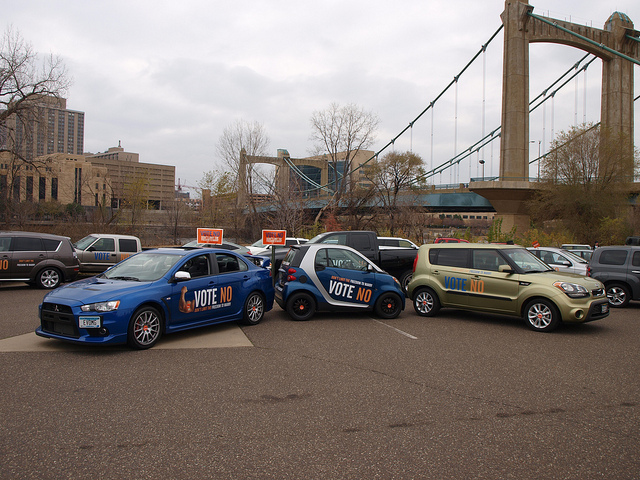 As the race continues to be too close to call, those of us demanding marriage equality in Minnesota have become louder. Just look at the side of the vehicle that just passed you.