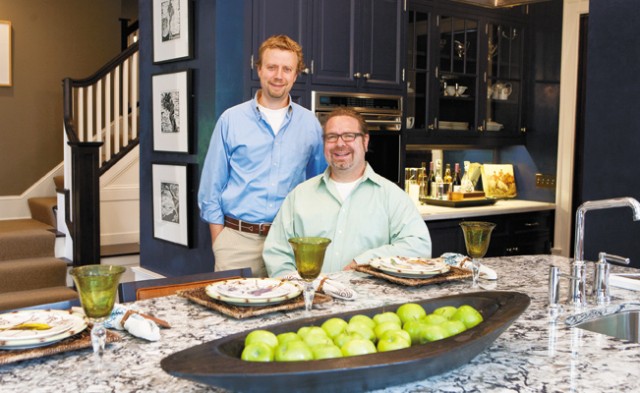 Partners John Larson and Mike Stewart in their kitchen designed by Bonnie Birnhaum and Karen Soojian. Photo by Hubert Bonnet.

Partners John Larsen and Mike Stewart in their kitchen designed by Bonnie Birnhaum and Karen Soojian. Photo by Hubert Bonnet.

Having been well-preserved, an 1899 home overlooking Lake of the Isles in Minneapolis was looking to be brought into the twenty-first century. The home’s new owners, John Larsen and his partner Mike Stewart loved the house, but saw the potential it had to offer.

A large attraction to this home also resided in the legacy left by its previous owners, Stanley and Martha Platt, who lived in the house for seventy years. The Platts, a civic-minded and politically active family who were largely involved with the community and international peace advocates, hosted many fundraisers and events.

“They did a lot of work for women’s rights in the cities and international work with the UN,” Stewart said. “We kind of felt the energy of that, and we wanted to carry that legacy forward.”

Larsen shared a unique story of how they spent a year going back and forth with the Platt’s children, who were selling the estate. “When we made our first offer on the home, it was much lower than what they were asking for,” he said. “We wrote a letter explaining how inspired we had been by the owners that had died. When our last offer had been accepted, it was at a time when other offers were being made that were much higher, but they chose our offer because of that letter.”

The men quickly began to work on redesigning the home. Larsen works in architecture with his company, Design 45, but he expressed concern over design elements: “I’m good with a lot of things, but curtains and fabrics can make my eyes cross.”

Stewart agreed with his sentiments. “We’re gay, but we’re not that gay to come in and have beautiful interior design happen,” he said.

As the men began work to redesign their home, they were advised by their Cambria countertop representative to be a part of the American Society of Interior Designers (ASID) Showcase series. The showcase project is a fundraiser for the local ASID Minnesota chapter.  “It allows us to raise money for causes we believe in as well as our own chapter,” said Holly Bayer, co-chair of the ASID committee, listing this year’s beneficiaries as the Women’s Foundation and the St. Paul Chamber Orchestra.

The couple shared an initial hesitancy to sign on as an ASID home. “Showcase homes can get kind of disconnected with each designer wanting to do their own thing—which is great, just not in my own house,” Larsen said.

After meeting with the ASID committee, any fears Larsen and Stewart had going in were calmed as they were reassured they could veto anything they did not like about the designs. The couple decided to go ahead and open their home to thirty designers.

Larsen and Stewart spent time before the designers joined them to determine what mattered most to them. “It set the stage of a clearer interior design focus that we had in mind than other people might have,” Stewart said. “For instance, the first three rooms of the home have original, historic woodwork, and some of the designers were considering painting, and we ended up keeping it all original. John went through and worked on design and what made sense—which parts are historic and which parts can be updated.”

Working with so many designers was described as a whirlwind experience. “The mindset going into the project is typically, ‘buckle up!’” Bayer said. “This is a large undertaking with a lot of moving parts, including homeowners, contractors, twenty-plus designers, sponsors, local artisans, and tradespeople, and we have to keep it all moving towards a very final, tight deadline!  There is no stopping once we’ve begun.”

Larsen echoed these sentiments. “It was nuts having thirty different designers that sort of wanted to make their mark,” he said, but went on to say how it could have always been more hectic. “They’ve been at this for a while, and they’ve come up with some pretty good processes to rein the chaos in a little bit”

Stewart shared similar views. “They’ve streamlined the process so they really cut down on the time that the owners have to be involved with the process, but we got more involved than I think others might have,” he said. “They met with us and heard stories about who we are, and we gave input on what we wanted instead of just handing off the home to people to just make it look pretty to show off.”

Some of the house had to be torn apart while other areas remained pretty much intact. “As a group, we were determined to bring this grand old Victorian back to its glory,” said Angela Parker, a co-chair on the ASID committee. “You could feel the property coming to life as it transitioned from abandonment to sitting proudly on the property.”

The foundation needed to be stabilized and the roof had ice dam problems. In addition, the whole house was stripped of its siding and sheathing and reinsulated from the exterior. From the beginning, the owners knew they wanted to update the home with new, green features specific to the Minnesota climate. Some of these features include geothermal heating and cooling systems, new LED lighting, and an irrigation system which uses thirty percent less water than traditional systems.

As a commitment to making this a green project, even materials taken from the remodel were either reused in the home or sent off to be recycled or reused by others. A rain collection system has also been installed on the roof, while advanced framing techniques cut down on the amount of lumber required for the project. At its completion, the home has achieved Minnesota GreenStar “Gold” certification, which is the highest level offered.

“Design-wise, taking advantage of natural light and the views were a key component of the project,” Larsen said. However, the process was not entirely smooth sailing. “There was a bit there where it got a bit icy; people weren’t excited about where we wanted to take things. But we came through it, and it turned out wonderfully,” he said.

The homeowners opted for the main floor rooms to embrace their historical architecture, while the house transitions into a more contemporary feel progressing to the upper floors, with design influences by Larsen and Stewart.

“The kitchen was one of our favorite rooms,” Stewart said. “I like to cook a lot, and I’m really excited to cook in that space, to get in there and spend some time. But I worked primarily with designers on the gift-wrapping room and my home office—those rooms turned out kind of crazy. The designers had a lot of fun picking out bright, funky colors, which is kind of my taste.”

Parker described how much attention was paid to the details. “The interior designers involved with this project were diligent,” she said, “as we designed and redesigned each fabric, paint color, area rug, wall covering, furniture, and art, so everything was perfectly placed in the home.”

As Boyer noted, the designers worked to include the homeowner’s own pieces. “The designers incorporated many pieces from John and Mike’s art collection into their design concepts, so there is great art literally everywhere,” Boyer said. “The features you might miss are the hundreds of green selections and decisions the guys made to bring the house into the twenty-first century and beyond.”

Now that the redesign is finished, the designers look back at the experience with fondness. “The grand home is very stately now that it is completed,” Parker said. “It will live a long life on the lake.”

Boyer reveled in the new, green aspects of the home. “Every year, I’m amazed at what an incredible outcome we have,” she said. “This year, the home isn’t just beautiful; it is state-of-the-art energy efficient, highly personal to John and Mike’s style and above all, welcoming!”

At the end of the experience, the homeowners are happy with their decision to be a part of the ASID showcase. “Being on the other side of it, it’s great to really be able to enjoy the home and we’re looking forward to it,” Larsen said. “Before we had gone with ASID, we had planned to do this over 10 years, a room at a time. The only downside is that compiling all of these decisions on top of construction was a little overwhelming.”

Stewart feels at home in the newly designed space. “It seems to me like the home was designed for us and really reflects us,” he said. 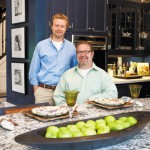 Partners John Larson and Mike Stewart in their kitchen designed by Bonnie Birnhaum and Karen Soojian. Photo by Hubert Bonnet. 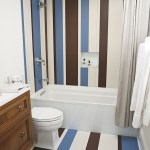 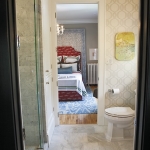 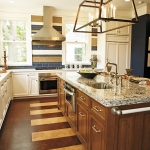 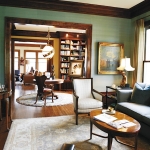 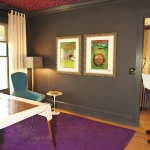 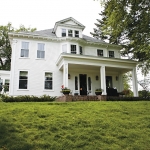 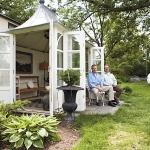 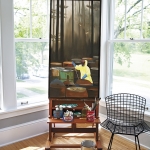