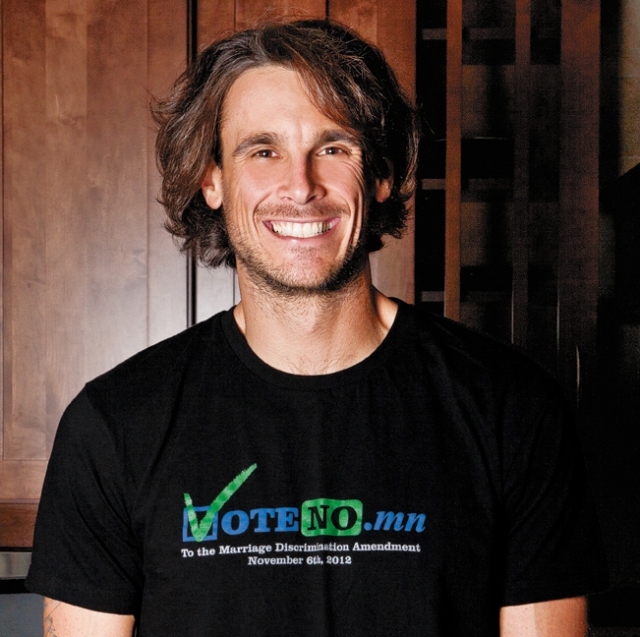 Chris Kluwe is a 30-year old punter for the Minnesota Vikings.  He’s a husband to Isabel, a father to two little girls, a bassist in Tripping Icarus, a gaming enthusiast, a Twitter phenom (@ChrisWarcraft), and a freedom fighter.  Using his words to point out inequalities and inconsistencies in the public sphere, Kluwe skyrocketed to our attention as his retorts went viral on the internet.  First, he took on a Maryland delegate, Emmett Burns, who criticized Ravens player Brendon Ayanbedejo for supporting same-sex marriage; recently, his response earned him a citation from Maryland delegate Sheila Hixon for “standing up for equality for all.”  Then, among other pieces he’s written lately, Kluwe logically argued down the stance of former Viking Matt Birk, who publicly claimed that same-sex marriage would be detrimental to children. Most recently (as of press time…but I’m guessing there will have been more epic letters since), he fired off a letter to the Pope and Archbishop Nienstedt for various reasons, not the least of which were for mixing their role as a church with taking a political stance as well as writing a letter to a mother indicating that her eternal salvation may be at risk if she doesn’t reconsider her request for acceptance of her gay son.

Taking all of these points into consideration, you can see why I politely declined all offers to help me prepare for this interview with Chris Kluwe by giving me a few football pointers.  No, we weren’t going to be talking about football.

Andy Lien: Prepping for this piece, I had to do some homework.  Turns out, there’s a whole lot about you out there.  You do a lot.  What have you been doing in the media lately?  How do we find you?

Chris Kluwe: Mainly on Twitter at my @ChrisWarcraft is where I do the bulk of my rabble-rousing, I guess.  I have a blog at the Pioneer Press, Out of Bounds, and various radio interviews.  If you want to get in contact with me, Twitter is usually the best way to go.  I read all of my replies–I may not respond to all of them–but I do read all of them.

AL: Are you a regular on the radio?

CK: Yeah, the 93X Half-Ass Morning Show…I’m a pretty regular guest on there; this year I’m on every Tuesday around 7:30am.  People can listen to me not talk about football.

AL: Your appearance on “Wait Wait…Don’t Tell Me” this past weekend was hilarious.  “Punters are the bassists of football…” that was great.  You’re a punter and you’re the bassist for Tripping Icarus. How did you come out wailing like you did against this Marriage Amendment?

CK: I was involved with Minnesotans for Marriage Equality.  They had contacted me through Twitter and said, “Hey, would you be interested in helping us out?”  I looked at the amendment and said, “Yeah, this seems like the right thing to do, to help defeat this amendment.”  Because it’s taking away people’s freedoms, it’s taking away people’s right to live their life free of oppression.  So, I’d been involved with them…recorded a couple of radio ads…and then I saw the story of the Maryland delegate who sent the letter to the Ravens.  I read the letter and I was like, “Wow…that’s messed up.”  Can I swear?  I said, “Wow, that’s fucked up.”  I went to bed because it was around 11:30 at night and I had to wake up for practice the next morning.  I was lying in bed and I can’t get to sleep because I’m just thinking about this letter. I had to write something down or else I wouldn’t be able to sleep.  So I went to my computer, typed out the essay to Mr. Burns in about an hour, and sent it off to a couple of guys at Dead Spin because they’ve published some of my other stuff and I’ve been involved in some of their round table/slate discussion for football this year.  They posted it at 2:00 the next day.  All the sudden I checked my Twitter and there were 400 mentions. 800 mentions. 1600 mentions.  I was like, “Whoa…someone’s reading it.”

AL: As I saw people intro-ing the link on Facebook, I kept seeing, “Now I’ll have to start watching the Vikings” or “Now I have a new favorite Viking.”  Did you expect that the Vikings would see an increase in popularity out of saying this?

AL: I know people are saying you shouldn’t because you’re with the Vikings.

CW: Yeah, that was one of the things that people would say, “Hey, the language…could you have not used quite the colorful words?”  So, that’s why I also released the censored version of it.  The “sparklepony” version of it.  But, I never thought they would get people interested in the Vikings. That’s great–it’s more people to cheer on the team.

AL: As far as role models go, there are just a handful of out pro athletes. None in the NFL.  Do you predict more might be coming out? Or aren’t there as many?

CK: I think so.  I’d say there’s probably two to three guys in the NFL that are playing right now–I don’t know who they would be but simple statistics state that there are people in the NFL.  My hope is that one day, guys’ll feel comfortable enough to be who they are…not to have to worry about “Does my sexuality matter?” “Does my religion matter?” or “Does my race matter?”  What matters is, “Can you play on Sunday?”  “Can you help us win?”  That’s what sports should be about.  Hopefully, what I’m doing, what Brendon’s [Ayanbadejo] doing, what Connor Barwin and Scott Fujita are doing is helping change that culture to make other guys realize that who you choose to marry–who you choose to sleep with–doesn’t matter when it comes to football.

AL: Not coming out can actually be detrimental.  After people come out, they can actually perform better in sports.  The psychological weight is lifted.

CK: There’s not as much stress.  I think it was Mark Cuban who said, “Whoever comes out first is going to have the greatest marketing opportunity ever.”  Because there are so many companies involved, especially in the NFL and Major League Baseball–do you think Nike and Gatorade wouldn’t want to be involved in the greatest civil rights moment of this era?  That’d be like getting Jackie Robinson to represent your product.  It’s not just the right thing to do from a human rights standpoint, but from a commercial standpoint you could make millions.  It’s unbelievable.

CK: You have to give them factual, statistical arguments that you can back up and ask them to argue the same way.  Don’t be satisfied with an appeal to emotion or an appeal to fear.  Those aren’t valid arguing techniques.  Give me something concrete that I can look at and reason or argue with.  The thing is, when you say that it’s about the children and then you don’t give any facts why it’s about children, where’s your argument? You’re basically saying, “This makes me feel uncomfortable so we should get rid of it.”  But that’s not a good enough reason to deny a segment of American citizens federal benefits and rights under the law.  It’s discrimination.

AL: When you made the point to Matt Birk that “it does affect your kids in case one of them is gay,” that’s where I thought we might see that they could come around. They should probably come around to this–the intelligent, conscientious folks–and that might be where. Do you think they will? Is it generational?

AL: This is an emotionally charged issue.  This past year in the campaign against this amendment, people have been asked to have conversations and share their stories. What advice would you give people as they have these very difficult discussions?

CK: I’d say that when you talk to someone make sure they’re aware that you do respect that they have the right to believe what they want to believe but, at the same time, that this is an issue that strikes at the very core of what it means to be an American citizen.  In America, everyone pays taxes, everyone has the opportunity to serve in the military, and everyone can defend the freedoms and rights of the country.  And, you are entitled the same rights and privileges under the law as everyone else.  If you look at any sort of legal argument from the past for segregation, Plessy v. Ferguson, separate but equal doesn’t work.  American citizens should all be treated as American citizens.  When you deny someone their rights, you are effectively saying, “You are not as good of a human being as I am.  You are less than I am.  You don’t deserve the same protections that I do.”  And that’s just wrong. That’s not what America stands for.

AL: Part of that is coming out for some people–letting others know that you are who you are and that it affects you.

CK: Exactly.  We all live together in this nation. America’s inclusive–it’s not exclusive. We’re all in this together.

AL: I’ve been noticing an overwhelming sense of gratitude in the community–relief–when people share what you’ve written.  You’ve become a spokesman for them.  I’ve also noticed this rallying behind you, that you’ve struck such a chord and done so consistently.  My question is, what’s next for you?  Is there a Chris Kluwe for public office in our future?

CK: [Laughs] I don’t know if you saw my tweets last night [during the first presidential debate] but I’m not a real big fan of our political system. To me, there are some very fundamental instabilities in our political system right now that really need to be overhauled.  If you look at historical trends from various empires, it doesn’t end well.  The barbarians are always at the gates…and they’ll get in, eventually.  So, politics-wise, I have no plans for running for political office.  I’d like to keep writing–you know, pointing out stuff that doesn’t make sense. I’ve always felt that you should treat others the way you want to be treated.  A lot of life would be a lot easier for a lot of people if they just followed the Golden Rule. If you’re going to do something, ask yourself, “What would it feel like if someone else did that to me?” Then, if you look at it like, “I wouldn’t want someone else to do that to me,” don’t do it to anyone else.

AL: This is the final question.  You’ve been here since 2005, what do you think is going to happen in this election?

CK: If I could predict the future, I’d buy a Powerball ticket. What I hope will happen is that Minnesota will defeat this amendment because 31 other states haven’t been able to and it really is a disturbing sign that other states have felt that they need to oppress a certain segment of their population, of American citizens, and deny them equal benefits under the law.  Eventually, at some point, the Supreme Court is going to look at it and say that these are frankly unconstitutional–you’re using religious arguments to try and influence secular matters.  That is a violation of the First Amendment.  So, I hope that Minnesota will be the first state that says, “Look, we are not going to oppress our citizens. We’re going to realize that every citizen in this state is here for the betterment of the state. And we’re not going to say that just because you want to get married to someone of the same sex or just because you have a different religion or just because you have a certain skin color that we’re going to deprive you of your rights.”  Hopefully, we’ll defeat this.