Marriage equality has been in the spotlight recently, as President Barack Obama announced the federal ban on same-sex marriage is unconstitutional, spurring Democrats in Washington, DC, to discuss an attempt to repeal the Defense of Marriage Act (DOMA). Denny Smith of St. Cloud, Minnesota, wants to bring the same-sex marriage debate to the forefront both statewide and beyond through the new organization he founded, Winning Marriage Equality (WME), of which is Executive Director. 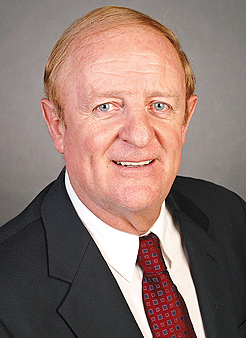 A longtime GLBT advocate, retired teacher, and author of God did TOO make Adam and Steve, Smith says, “People have a right to live their life in a state of happiness and with the person that they choose. That’s what’s driven me to this.”

Smith incorporated WME in January with the ultimate goal to energize and educate those in the GLBT community and allies alike. It aspires to mobilize others, through seminars and rallies, to advocate for marriage equality, and employ various media to disseminate their ideas.

As Smith shares, he has “high stakes” in WME. His eldest son, Kyle, and his son’s partner, Joe, have been in a committed relationship for 16 years. Although they were unable to marry, Joe immediately was accepted as part of the family.

Smith explains, “I considered Joe my son-in-law. Everything was this really neat, normal family life. But then, the legal shoe fell.”

Joe was in the United State on a student visa, and when it expired, he had to return to the Philippines.

Smith relates that the separation was “absolutely devastating. Here are two bright, young people who love each other, and they can’t be together.”

As Smith notes, if Kyle had the same rights as his brothers, he could be with the one he loves. While Kyle and Joe lived in Seattle, they would go home to St. Cloud for the holidays every year. Smith recalls that the first Christmas without Joe, Kyle was miserable.

So, as Smith puts it, “One of my goals is, before I meet my maker, I want my whole family together for Christmas.”

Smith clarifies that his family is just one example of the effects of denied GLBT rights, and people all over the country are experiencing similar hardships.

In Smith’s words, “There are a lot of people in a lot of pain, and quite frankly, that shouldn’t happen in America.”

Smith’s emotional family situation interweaves with his positive message that things are going to change.

WME, according to its mission statement, is pursuing “equality, respect and dignity for LGBT people, their families, and their relationships.”

Its founder wants not only to pursue the goals and spread the ideals of WME, but also prepare others to do the same, as he points out: “My major goal here is to get out the message. Give people the courage to stand up, and then give them information to have meaningful dialogue.”

WME, which is funded by donations and fundraising, aims to train others to advocate for marriage equality through positive and productive means.

Smith observes, “Eventually, we want to have people well-versed enough that they can go out, and do what we’re doing. I’m not on an ego trip about my message. I really want everybody to start talking about this.”

As Smith emphasizes, WME, in addition to stoking debate, is striving to muster not only those in the GLBT community, but allies as well.

In Smith’s view, “More than anything, I see so much potential out there to energize a base of allies. My contention is this: We don’t have to argue with the antigay organizations. We don’t have to outshout them. All we have to do is outnumber them. This is a constitutional issue guaranteeing people equal rights. Moral or immoral—we can argue that until we are blue in the face—but it doesn’t matter. This is a constitutional issue.”

Smith expresses that he is “optimistic” in regard to the current political climate in Minnesota—a Republican majority in the State Legislature and a Democratic Governor—and its effect on the progress of marriage equality, adding, “Not everybody shares my optimism yet. But give us a year.”

WME is working to pass the torch of optimism in a time when some are fighting to uphold legislation that restricts equal rights for GLBT people, Smith comments, while others attempt to define what constitutes a family.

Smith muses, “Traditional family is determined by love, not by makeup. I don’t see how we can criticize love, but yet, as a society, we have a tendency to do that.”

While discussing future legislation, either local or national, granting marriage equality, Smith remarks that when it gets on the ballot, “Let’s make darn sure we are energized and informed.”

Smith states that WME’s hope ultimately is to equip any who feel intimidated with information and courage actively to pursue and defend what should be guaranteed by the US Constitution.

WME will conduct free seminars throughout March in Duluth, Minneapolis, and St. Cloud. Smith, who has extensive experience as a professional orator and seminar leader, will speak at the events.