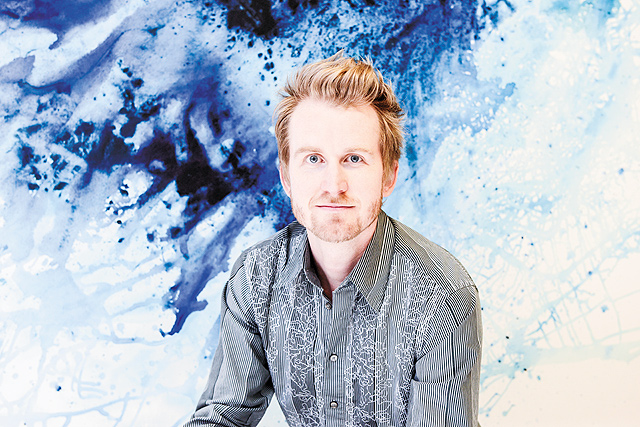 “I don’t do a lot of planning, but I do a lot of thinking and seeing.” Drew Beson describes his creative process as an artist like a true “creative type.”

In recent years, Beson has been published or written about in every major Twin Cities publication and has also had exhibitions at several galleries including The Minneapolis Institute of Art, Hennes Art Company, and Gallery 13. He has had solo exhibitions at galleries all over Minneapolis. Currently, you can find Drew making and exhibiting work at his new 4,800 square foot luxury studio/gallery combined space in the skyway level of Canadian Pacific Plaza in Downtown Minneapolis.

“I love having the best materials, so I splurge on those and make sure they are at the ready,” he adds. “When I am painting, I listen to audiobooks through my headphones. I like to take my active brain out of the equation, and let my body and subconscious get to work. It allows me to paint effortlessly—akin to grass growing, without over-thinking.” Beson jokes that he has the added benefit of ingesting nearly one hundred books each year.

Art is in Beson’s blood. “I was made for this,” he says. “I have been fearless about being a professional artist because of people like my Uncle Billy [local interior design superstar Billy Beson]. He has been a great example of how a person can be incredibly successful by combining natural talent, artistic creativity, and passion.”

At nine years old, showing incredible promise, Beson was offered a scholarship to study painting and drawing at a renowned atelier program in Excelsior, Minnesota. The years to follow were filled with travel to amazing destinations—deep sea fishing in Alaska, splashing on the beach in Hawaii, surfing in Australia, and safaris in South Africa. In the years that followed, Beson studied studio art at St. Olaf College. During this time, Beson continued his travels and seized the opportunity to study art in New York, having interviewed 25 artists, and visited over 100 galleries and museums during his time there. Beson also studied art in Florence, Cortona, Siena, and Lucca, Italy, as well as London, England. 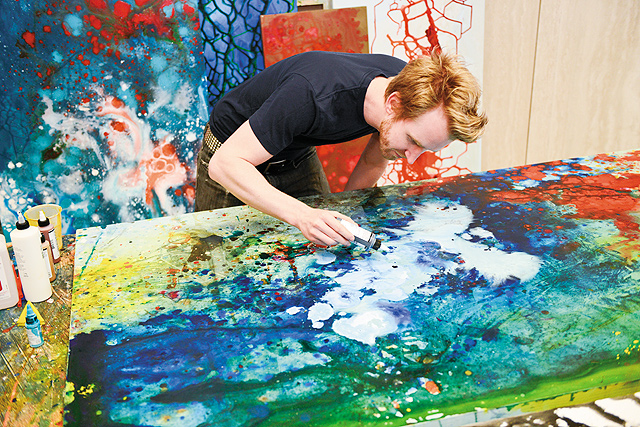 For Beson, who has studied art all over the world, inspiration is in everything. From the color palates and prints of women’s dresses in Cape Town to the forms of diptychs and triptychs found in the cathedrals in Florence, Beson even takes note of his adventures scuba and skydiving at the Great Barrier Reef. “It has given me a better perspective on space and time and knowing that artwork will outlive us gives me pause about what I am producing,” he says. “It also reminds me that it is alright to take a siesta every once in a while.”

Hearing Beson talk about a siesta comes as a shock to anyone who hears him discuss his passion and sheer joy in creating art. Recognizing that canvas was the best way for him to work for a long time, Beson describes how he would paint on unstretched rolls on the ground, and stretch edited compositions that were promising.

“More recently, I have enjoyed painting on custom built panels; they allow me to use a ton of liquid and change the viscosity of the paint which would misbehave on canvas,” he says. “The rigid nature of the panel also makes it possible to finish my most recent work with a hand-poured resin, which is finished with a blowtorch. It is super high gloss, and people love it because it makes the paint look ‘juicy.’”

Showing off his artwork at the same location where he creates it, in a combined studio and gallery space, is quite unique. At first, Beson says his goal was to have a space to show his work beautifully. Setting up the gallery and spending a full day sitting and waiting for people to come in resulted in a restless Beson who felt he needed to get back to work.

“It became clear that to keep the gallery space open, and also be creating, I was going to have to make it happen at the gallery,” he says. “People were interested and investing in my work, which gave me the confidence to make the space a permanent place to make and show my work.” 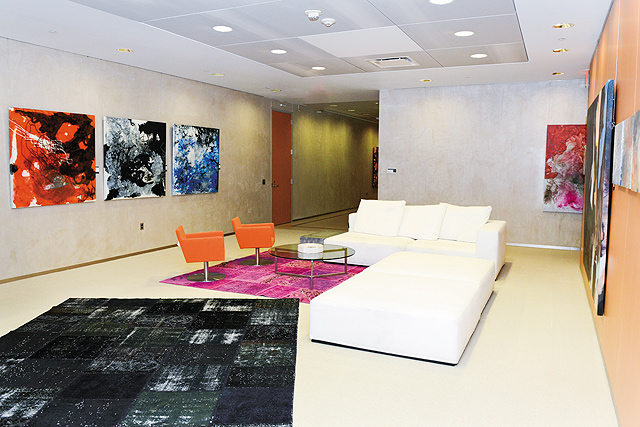 Having a combined space should notably impact the creative or business side of Beson’s work, right? According to the artist, he was much more aware of the fact that people were watching him in the beginning, but now it is just something that happens without much notice.

“Having people be able to see the pieces I am working on, materials I am using, and me making the work in real time adds a voyeuristic quality to the process,” he adds. “My hours have become a little more moderate which has helped me get into better habits, which has helped me create a larger volume and quality of work. The more I make, the better the work has become. Business has been exciting with the combination of the gallery and studio. It is a formula that has led to a lot of interest, curiosity, and new collectors.”

This voyeuristic aspect is nothing new to Beson, who, in June of 2008, spent 104 consecutive hours living and painting in a 9 x 31 glass room in the Minneapolis Skyway. He called it a “Live INstallation,” entering at 9 am on a Monday morning and emerging at 5 pm on Friday evening. The news called it “live art to the extreme,” but Drew considered it an exercise in focus. “With 30,000 people a day walking by you and your work, the feedback is instantaneous,” says Beson.

This was not Drew’s first public art performance. He has also performed live on stage with musicians like The Invincible Kids and Mix-Master-Mike from the Beastie Boys. This type of behavior was ridiculous enough for Drew to be recognized as “The Best Party Addition in Minneapolis” by Minnesota Monthly Magazine.

“I liken it to the difference between putting on an improvisational play and creating a film: both come from a creative, genuine place, but sometimes the genius is in the building and sometimes he isn’t,” Beson says. “Most of the experiences on stage are alcohol-infused, dark, fast-paced with a soundtrack (like my past dating life). Now, I am able to control the setting and the environment where the work is created which has resulted in better artwork.” 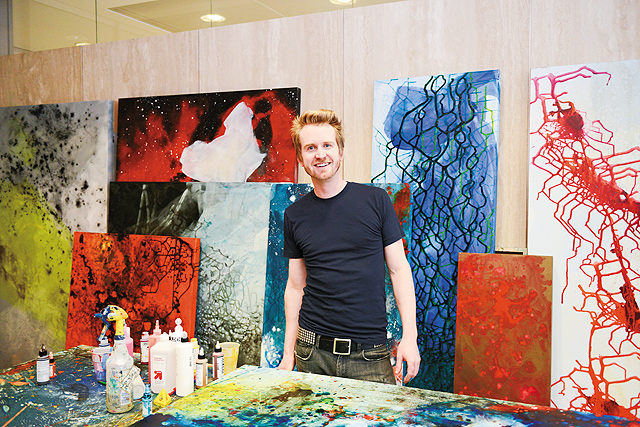 In addition to his art, Beson has also been recognized for his philanthropic pursuits, such as his contributions to nonprofits, including the Greater Minneapolis Crisis Nursery, Smile Network, Free Arts, and One Heartland. “My mom, Diane, always included my brother and me in her volunteering and charitable pursuits when we were kids; it was something that was important to her during her life, and has become important to me as well,” Beson reflects. “I like finding creative ways to include nonprofits to help them get the recognition, awareness, and financial support that they deserve.”

It is this same attention to detail and care for others that has resulted in Beson’s unique Lifetime Return Policy which has art collectors very excited. Beson’s gallery offers collectors free shipping of original artwork and the ability to return a painting next week or next decade for a credit toward a new piece.

“I am committed to making art for my life and I want collectors to have confidence when they invest in my work,” he says. “I didn’t set out to reinvent the rules of the fine art world, I just believe showcasing high quality artwork with an unusually generous return policy will result in very satisfied collectors.”

Here’s how it works: Enjoy an original piece of art for a lifetime. If not, return the painting within fourteen days of receipt for a full refund. Beyond that two week grace period, a refund will be in the form of gallery credit. Use the original packaging, or the gallery can supply a new custom box at cost. Drop it off at any UPS store or the gallery will coordinate a pick-up either at home or the office. Only one condition: the artwork must be in its original condition.

What makes Beson show such care to his customers? According to him, it’s simple. “I love my collectors, and I owe them everything. I can do this because I know that the artwork that I make has the highest quality materials, and I want to make certain that they enjoy their artwork forever.”