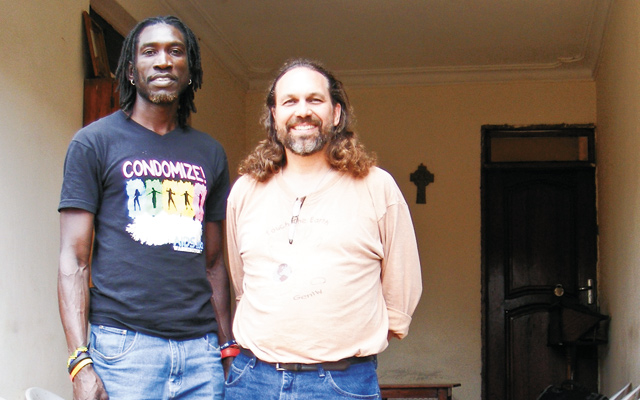 Theologian and author David R. Weiss (To the Tune of a Welcoming God) has been a diligent and courageous ally to the GLBT community. For over three years he has tracked the unfolding anti-gay horrors in Uganda where gay activist David Kato was brutally murdered; where the Anti-Homosexuality Bill has been perennially put forth in Parliament calling for the death penalty for homosexuals and prison for straight allies; where rape has been perpetrated on lesbians with the ignorant hope that it will turn them heterosexual; where HIV/AIDS has been ruthlessly stigmatized; and where the media outs gays and lesbians, not to expose hypocritical closet cases, but to make them targets of an anti-gay reign of terror that results in bashings, systematic employment discrimination, targeting of straight friends and straight family members, and eviction. Monied white American evangelicals who perpetrate the “pray the gay away” mindset have been enmeshed with Ugandan right-wingers and Christian extremists. Moreover, gay superstar Elton John has used his gigantic celebrity status to praise and legitimize former US President George W. Bush’s AIDS policy which was expressed through the controversial President’s Emergency Plan for AIDS Relief (PEPFAR).

I recently communicated with Weiss about his March journey to Uganda where St. Paul-Reformation Lutheran Church’s Wingspan Ministry sent him to assess how things have been developing there and to explore new partnership opportunities. Wingspan’s Uganda Project has been very active in raising area awareness about the Uganda plight, including a July 2012 event with Bishop Christopher Senyonjo, a Nobel-worthy ally who, at profound sacrifice and risk, has created safe havens for GLBT people in Uganda, and a screening of the Teddy-winning documentary about the Ugandan reign of terror, Call Me Kuchu.

Weiss on Homophobic Hysteria as a Tool for Political Distraction

“Several GLBT activists in Uganda voiced their perception that the Anti-Homosexuality Bill is often used to distract public attention from far more important bills dealing with things like mineral rights, oil leases, infrastructure funding, etc. Many in Parliament know that simply referring to this bill will steer both the media and the public away from matters of more genuine importance. No one dismisses the threat that the bill poses. If passed it would have a crippling effect on any work being done to advance civil rights as well as pose a direct and devastating effect on the freedom and safety of GLBT persons, but there is an awareness that, just like in the US, this ‘issue’ can be used for political and PR leverage quite indifferent to the people whose lives it holds in the balance.”

“Just as in the US, there is clearly a measure of internal ‘movement’ politics. I was present at a meeting with about 20 younger activists running programs ‘in the trenches,’ and they (loudly) feel left out and ignored by the larger, more visible groups that garner the lion’s share of international funding. These groups are often in under-served rural areas and dangerous areas of Kampala.”

“We like to imagine that a community under fire will band together, and I think that’s a genuine first impulse. But when the level of desperation resulting from economic duress and social/familial alienation is so high and unremitting, even good people find their character compromised. Theft and blackmail happen more often within the GLBT community than you think.” 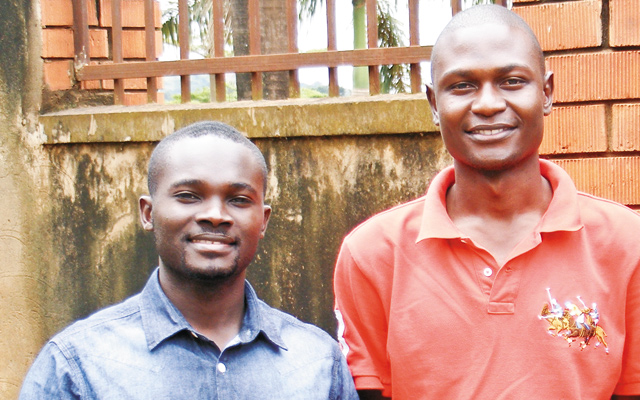 Andrew (blue shirt, an ardent Ally and Bishop Senyonjo’s nephew) is the Programs Director at SPREC; Moses (red shirt) is an Ally and a faith-based activist. Photo courtesy of David R. Weiss

“I heard almost universal agreement that economic empowerment for individuals and GLBT communities is critical. To work for yourself means you don’t worry daily about getting fired because you’ve been outed or someone ‘suspects something.’ The level of economic anxiety is extraordinarily high. Finding or funding programs for economic empowerment that not only sustain individuals but also build and strengthen communities is critical. When people can earn money they can better access health, experience a sense of dignity, and contribute to a sustainable movement.”

“There are very real risks, from reputation to livelihood to physical safety, just for being an Ally in Uganda. But Allies are indispensable in this work – they will be the tipping point in social change. Perhaps the greatest need is for Allies within the faith community. While there is a largely misplaced ‘African culture’ component to the anti-gay stigma in Uganda, the demonization of GLBT persons is really fomented by religious conviction. Faith-based Allies face some of the greatest danger because they dare to speak not simply from ‘mere emotion’ but from deeper convictions. They are perceived as betraying the faith. But, ultimately, change will require a recognition that there are other, more welcoming ways, to read the biblical story and to think theologically about sexuality.”

“Indeed, most GLBT Ugandans harbor a deep personal faith summed up as: ‘God made me and God loves me’ but they lack any supportive faith community. And more than this, they lack a coherent theology that offers a picture–and an understanding–of God larger than their gut conviction. There is an unrecognized hunger for a framework that empowers them to see themselves not as exceptions to biblical rules but as one more example of characters loved by God who throughout the bibilical narrative loves and welcomes people otherwise marginalized by social prejudice. Right now they can barely imagine that’s even a possible perspective, but I believe gaining such a standpoint will be one of the most transformational moments in their struggle. Akin to King’s use of biblical imagery during the Civil Rights era, the GLBT community in Uganda will garner enormous strength when they realize that they have a place as beloved people within the Christian story.” 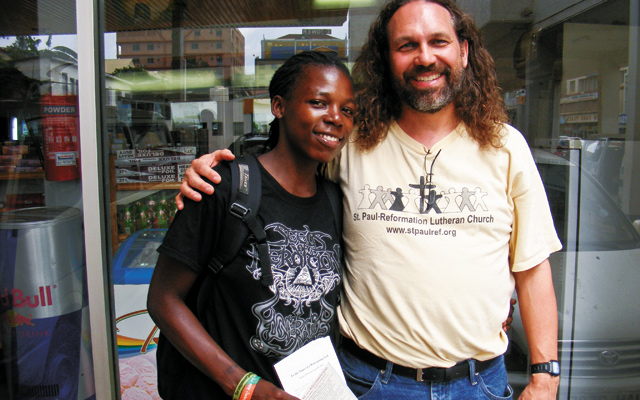 “I was struck by how much being transgender in Uganda requires embracing a profound sense of ambiguity. For the vast majority of trans Ugandans, hormones and surgery are not even wistful thoughts, and presenting as another gender is almost always dangerous and can easily be deadly if outed. The trans persons I spoke with were 100% certain of their gender identity and virtually 100% unable to pursue it in their lives. This isn’t even something they lament really. It is the way it is. One transman, in particular, struck me. Jay runs a small program called the Fem Alliance. He serves mostly rural women who identify as lesbian, bi, or trans, and he was very clear why HE does that: ‘I still have a woman’s body, and I probably always will. I know how dangerous it is to be a woman, so I want to make a difference for them.’ It was a fascinating embrace of ambiguity as a sort of providential given in a world where nothing can be taken for granted.”

Notes: In 2011 Lavender ran the ‘Uganda: An Overview’ Series. Read it again: Part 1 and Part 2. Find out more about Wingspan and David R. Weiss at www.stpaulref.org/wingspan_info and www.tothetune.wordpress.com