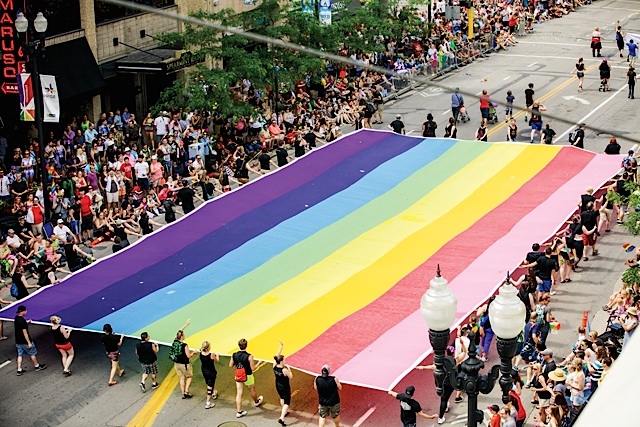 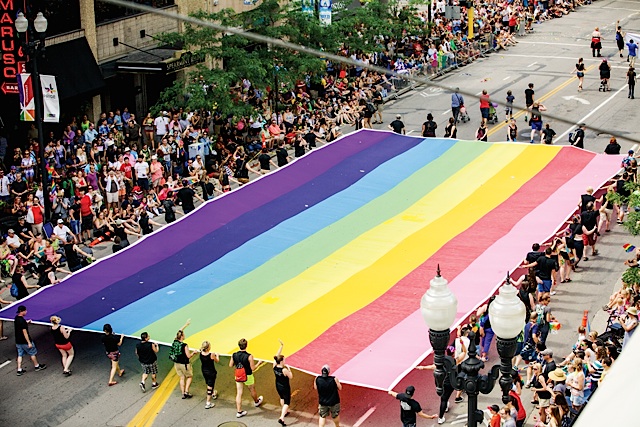 After the Pride Festival wrapped up last year, Twin Cities Pride got a lot of feedback from people in the queer and transgender people of color (POC) communities about some negative experiences people had during Pride. In response to this feedback, TC Pride hosted two listening sessions in December for the queer and transgender POC community that were facilitated by Dr. Joi Lewis. In these listening sessions the voices of people of color were centered, allowing them to really be heard in a new way by Twin Cities Pride staff and board members.

One thing that was brought up was that the policing and security at the Pride Festival was hard for the transgender and POC communities. Since the attack on Pulse in Orlando happened just two weeks before Pride, extra police were added to the security measures for the Festival in 2016. This may have made white people feel safer, but it definitely made transgender people and the POC community feel much less safe.

Another issue that was brought up by transgender and gender non-conforming participants was their experience of being misgendered by people throughout the festival, at exhibitor booths and food vendors alike. There were also instances of insensitive or transphobic comments made by people at the festival. Instead of Pride being an extra-safe space for transgender people to be themselves, to some the festival definitely felt like a place where they felt misunderstood or ridiculed.

There were also feelings about the People to People (P2P) Stage where the POC community felt like the placement of the stage was putting them off in a corner of the park. Roxanne Anderson from RARE Productions started the P2P stage over 15 years ago and the location of the stage moved to the current spot in 2010. The P2P Stage is located here because it gives the audience more space to sit in the grass and it faces away from other stages, providing a better sound experience for the P2P audience. This year we will be adding an area of food vendors to this area, making it feel like more of a destination to relax.

There was a perception that musicians of color were only allowed to perform on the P2P stage, but not allowed on the other stages. While RARE Productions does mentor young musicians of color and give them a space to perform on the P2P Stage, once these musicians are more experienced they are moved to other stages throughout the festival. There are people of color performing on all stages and Twin Cities Pride aims to communicate better about who these people are and when they are playing through pictures of all performers on their website and mobile app. Also to note that all performers were paid last year through a grant from the State of Minnesota Arts Board. While this money is not guaranteed every year, Twin Cities Pride did receive a grant for the 2017 Pride Festival and will again be able to pay all performers on every stage!

And finally there were concerns brought up about people with disabilities, especially more invisible disabilities like autism, and how more accommodations could be made for this community.

From all of this feedback, Twin Cities Pride is adding in some things this year to the Pride celebration. First, TC Pride is rolling out a new LGBTQ training module that all people who have a booth at Pride, plus food vendors, EMTs, security officers, and police will need to participate in before the weekend of the Pride Festival. Most of this training will be online, with the option to attend an in-person training if they would like. The LGBTQ training will also be incorporated into the Pride volunteer training. There will be a special focus on educating people about transgender sensitivity in this training and how to use more gender-neutral language to address customers and participants of the Festival.

Second, TC Pride is planning on having less of a police presence this year at the Festival and have more unarmed security guards and other ways to provide security. TC Pride intends to keep safety a priority and be able to respond quickly to emergency situations without having as many actual police officers present and/or visible.

To help address the misgendering of transgender people, TC Pride will be creating pronoun stickers for people to wear: she/her, he/him, they/them or choose a blank one and write in your own pronoun. TC Pride has purchased a large 30 x 50 foot transgender flag to be in the color guard of the Ashley Rukes GLBT Pride Parade and has partnered with Bisexual Organizing Project to also purchase a large bisexual flag to be in the parade this year as well!

And to help address the issues that people with sensory issues face at the festival, TC Pride is partnering with the Autism Society of Minnesota to create a unique tent space where people with autism, sensory processing issues, and/or other disabilities that cause sensory overload issues can go to calm down, cool off, and relax.  The Autism Society will be helping to create this quiet space and stock it with things that are soothing for people with autism or sensory processing challenges — things such as fidgets, small trampolines, fans, bottles of water, and more. This tent will be staffed with volunteers from the Autism Society throughout the Festival and will be located close to the gardens. TC Pride will also have a limited number of wheelchairs available for use during the Festival this year.

All in all, Twin Cities Pride is very thankful to everyone who participated in the December listening sessions and shared their experiences with our staff and board of directors. Some of the conversations were difficult to have and emotions ran high, but we appreciate that people were willing to speak their minds and be heard. We hope that the changes and additions we are making to Pride this year will be a step in the right direction and we look forward to more progress on these issues as we continue to improve each year.