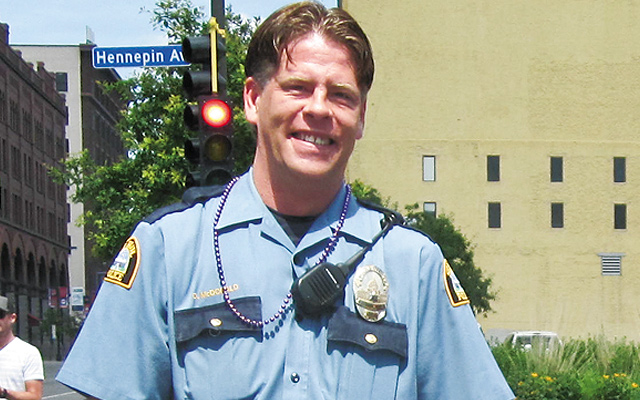 Darin McDonald has to come out–again and again and again.  Not because he’s a gay man (which he is), but because Darin McDonald is…a cop.  “When I’m socializing, it makes me laugh, because most of my friends will introduce me to others as, ‘This is Darin, he’s a cop,’” McDonald laments.  “I don’t recall introducing my friends to other people and stating their profession, unless I know the other person is in the same field.”

McDonald is, in fact, the first gay man is to come out while serving as a peace officer with the Saint Paul Police Department, and even as his off-hours friendships contain their share of awkward amusement, they also contain their share of awkward bemusement.  “Being a friend with a cop is not the easiest friendship at times,” McDonald admits, delineating the dark side of his dream job.  “It’s hard because most of us work nontraditional hours.  It’s hard to have your friends constantly call you and always having to tell them, ‘Sorry, I’m working.’”  Many of McDonald’s friends and colleagues see his twin societal roles–those of out gay man and dedicated peace officer–as intrinsically contradictory.

McDonald may come out as a cop to the GLBT community in person-sized increments, but he came out as a gay man to the cops in a much grander fashion.  Not long ago, the Saint Paul Police Department had begun a fortnight-long diversity training program, and when the GLBT-oriented educational organization OutFront Minnesota made its contribution, McDonald decided to speak up…and out.  “I stood in front of the entire department and told everyone I was the department’s only out gay male officer,” McDonald recalls.  “It was a little overwhelming, telling everyone my story when I didn’t know anything about the majority of the people I was standing in front of.”

While some might have seen only danger in such an admission, the young cop saw opportunity.

“I [came out] to break some stereotypes and to be authentic, to be a resource for my colleagues,” he insists.  “I invited them to contact me while I’m working.  At St. Paul, we do have several officers who are out lesbians and have been around before my hiring, and they continue to be a positive face for the department.”

Rebecca Waggoner, OutFront’s Anti-Violence Program Director, presided over that training session and was, to put it mildly, impressed by McDonald’s boldness.  “I believe that what Darin has done is an act of utter courage,” Waggoner affirms.  “We know that it is acts such as this–coming out to his entire police department–that will indeed change the world.  It was definitely an honor to train the Saint Paul Police Department with him!”

The relationship between law enforcement and the GLBT community has traditionally been an uneasy one, and McDonald sees himself in the role of liaison between the two twitchy tribes.

“I try to bridge the gap between these two communities in which I belong, and, if not bring them closer, then to bring a better understanding of each other,” McDonald offers.

This uniform intention has subsequently been transmuted into variegated action.  “Since I started in the Western District in 2009, I have started to be visual in several of the LGBT businesses in our city,” reports McDonald.  “It was strange at first.  I was constantly approached by some people with uneasy looks on their faces.  They would ask why I was in the business–usually a bar–and if they should leave, and I would explain to them I was there to be visual and to be a friendly face.  There would also be several other officers–gay and straight–who would do proactive police visits, and, after awhile, the clients and the businesses welcomed our visits.”

While the police are able to educate by virtue of their cobalt-armored presence, that doesn’t mean the coppers themselves aren’t beyond some horizon-expanding of their own.  Says Director Waggoner, “The relationship [between the Saint Paul Police Department and OutFront] exists because we believe that addressing systems inequities in an honest, straightforward, and professional manner will lead both to stronger systems’ responses to the unique needs of LGBT crime victims and create an improved climate for LGBT officers and staff.”

Happily (and necessarily), that amalgamated effort includes the highest echelons of authority’s authority.  “I have to commend Senior Commander Todd Axtell with the Saint Paul Police Department,” McDonald effuses.  “When several other officers and I asked in 2012 if we could have a presence in the Pride Parade, he worked hard to secure resources for us to take part of the parade.  In 2012, four Saint Paul Police Department officers participated in the Pride Parade.  This was the first time in the department’s history, since 1854, we were active participants.”

That historical act logged, McDonald has dragged his activism into the present, as well.  “I want those who know me to judge me on my police work and not of who I am,” he urges.  “I love this job very much.  I still show up and try to make a difference in someone’s life…even for a fleeting moment.”

Ultimately, for McDonald, his twin roles aren’t contradictory–they’re complimentary.  “I am a cop who happens to be gay and not the gay cop,” he parses.  “I work with a great group of cops.  I would do anything for them, and I know they would do the very same for me.  Obviously, we all have our own personal beliefs, but when I put on my uniform, that doesn’t matter anymore.”

What does matter is the job…where every shift is a learning experience.  Concludes McDonald, “Some say being a cop is a front row seat to the greatest show on Earth and we get paid to watch it,” McDonald reveals.  “I tend to agree.”