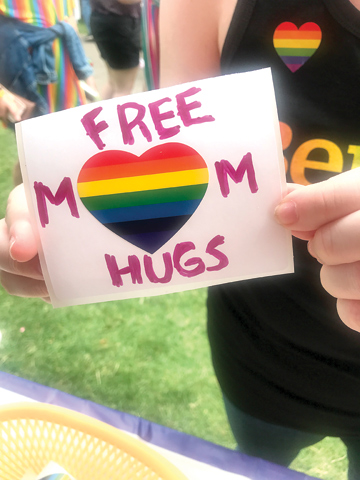 You might’ve noticed a group called Free Mom Hugs out and about, offering hugs at Pride and its many related events. Perhaps you’ve even given them a hug yourself.

Free Mom Hugs spread like wildfire after Sara Cunningham launched the organization in 2018. Since then, the group has provided outreach, support, and compassion as allies to the LGBTQ community across 48 states.

Jennifer Gorder helped bring a chapter to life right here in the Twin Cities last year, which has since spread to numerous other locations around Minnesota.

Free Mom Hugs was born out of Cunningham’s own reconciliation with prejudice of her own, which she was forced to come to terms with several years ago when her son came out to her at the age of 21. Her religious beliefs disrupted her initial acceptance, so as she grew into her newfound embrace of the LGBTQ community through her son, she searched for ways to give back to that community and began showing up at Pride events giving out hugs.

Gorder saw a story about Free Mom Hugs on Facebook, and reached out to the national chapter about starting one in Minnesota. After getting the green light, she teamed up with a friend, and they’ve since attracted nearly 3,000 likes on the metro chapter’s Facebook page and hundreds of volunteers throughout 2019.

The group had no funding, but Gorder says they met with the Pride Committee, who generously secured them a spot at Pride 2019. It was a hit.

The mission is straightforward: participants show up at LGBTQ events and give hugs to people who need it—people who’ve been rejected by their own families and carry around deep pain. Seeing a group of people who fit the image of a parent freely offering affirmation can be a highly emotional event for everyone. 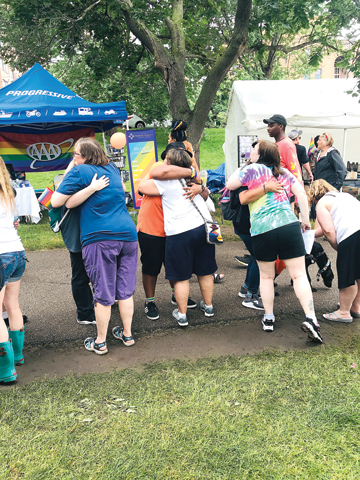 Gorder felt compelled by the hope that Cunningham represented for LGBTQ people struggling for acceptance.

“What I clung onto is that (Cunningham) is proof that someone who is not an advocate for our community absolutely can turn into one of our best. I don’t like to lose hope when we’re met with adversity all the time. Sarah Cunningham wasn’t born an advocate and look at what she’s doing,” Gorder says. “It’s a symbol of hope.”

Giving out hugs began to take an unexpected emotional toll on the huggers themselves, many of whom are empaths. Gorder says they had to shorten shifts and set aside an area for people to gather themselves back together once they began feeling emotionally drained.

She says there’s one surprising persona that often ended up the most affected by that toll: stoic, midwestern dads.

“They got the most hugs, because I think that’s the rejection that most people feel—from their dad,” she adds.

The meaning behind showing up runs deep. Gorder says it’s about much more than giving out hugs and high fives.

“There are a lot of wounded people. Anybody that came into it thinking they weren’t doing it for any personal reason—like they didn’t have a child, or they were just there because they thought it was a really cool thing to do—walked away realizing this is a bigger thing.” 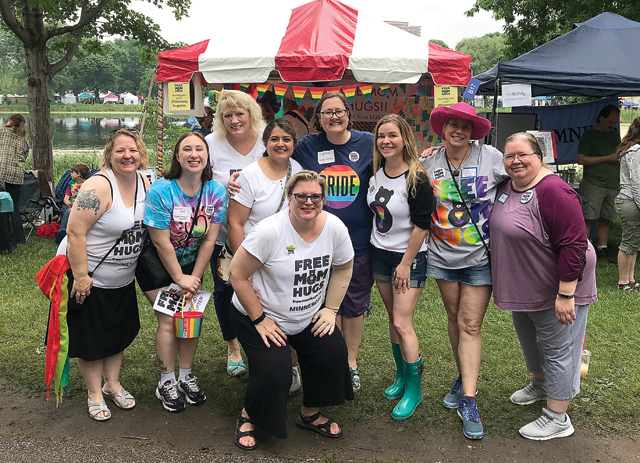 The Minnesota chapter of Free Mom Hugs made its debut in 2019. Photo by Jennifer Gorder

Gorder describes seeing people circling the group at Pride, picking up cues from them that their hesitation came from a deep place of pain. Some would return for a high-five the next day, a big step in their healing journey.

“Just the vision of these parents being that loving and that open was kind of a step one for them.”

The best way to get involved with Free Mom Hugs is by joining them on Facebook and reaching out. Gorder hopes to pass the leadership baton off to someone, and would also love to see the regional chapter grow into a full team. She says it’s a great opportunity for people with backgrounds in nonprofits or fundraising to take the reigns and perhaps begin working toward fundraising and expanding the reach of Free Mom Hugs.

For now, with COVID-19 suppressing public events for the foreseeable future, she hopes there might be opportunities for action in the virtual space, and encourages anyone with ideas to reach out on Facebook at www.facebook.com/FreeMomHugsMinnesota.