And the Show Went On: Cultural Life in Nazi-Occupied Paris
Alan Riding
Alfred A. Knopf
$28.95

During World War II, Paris, unscathed, fell to the Germans on June 14, 1940. By July, cultural venues—theaters, movie houses, cabarets—were up and running, a situation both encouraging and disturbing. The cast of characters includes most anyone known in that era in the realm of French letters, art, music, theater, and film—with a wide spectrum of behavior from total résistance to collaboration, and all the grays in-between. This period until the liberation in August 1944 was rich: Picasso remained and painted, and box-office revenues increased by 163 percent. But the appearance of normalcy involved cooperation with the Germans and the removal of Parisian Jews—artists and citizens alike. Riding questions the artists’ duty: Were they saving French culture, or merely collaborating? He quotes Britain’s Anthony Eden: “If one hasn’t been through the horrors of an occupation by a foreign power, you have no right to pronounce upon what a country does which has been through all that.” 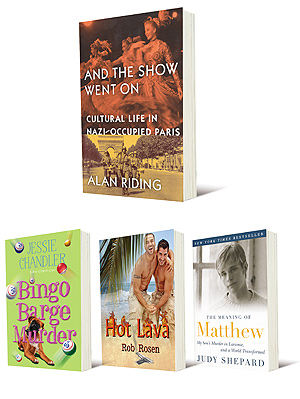 Local author Jessie Chandler launches her first Shay O’Hanlan caper with panache. Shay, owner of The Rabbit Hole, a caffeine-cool Minneapolis coffee café, is plunged into intrigue and mayhem when her childhood friend, Coop, becomes a murder suspect, and begs her protection. Chandler is never at a loss for a quirky name or bizarre venue: Coop is accused of offing Kinky, former boss and owner of the Pig’s Eye Bingo Barge, adding insult to murder by doing him in with a bronzed bingo dauber, itself a token of an earlier huge win at the Magical Pond, an Indian gaming casino out west of the Twin Cities. Add to this mix Shay’s business partner, Kate; Shay’s landlord/mentor, Mad Knitter Eddy; gorgeous Homicide Detective JT Johnson, whose steely eyes and lush lips make Shay’s heart go pitter-patter; assorted sociopaths; and an adopted snaggletoothed junkyard dog. Coffee, romance, murder, and dog all make for Minnesota nice-nice.

Another fabulous buddy-diva-drag-queen-murder romp from Rob Rosen, who in 2009 brought you Divas Las Vegas. Newly-minted protagonists Chase and “Order Me A Drink” Brandon attempt to vacation in Hawaii, but find themselves caught up from the first lei in sex and murder, sex and intrigue, and sex and alcohol—well, you get the picture. Rosen is a veteran writer of erotica for every major US gay publisher, including Advocate Men and Freshmen magazines, guaranteeing that the steamy scenes—of which the novel has a pleasing number—have been well-researched. The boys do undercover(s) work as their alter-egos, Judy and Liza, to get the goods on lying murdering bad guys, while Chase finds love in the arms of the FBI agent. A young street-hustler, Koni, and Brandon’s sister, Briana—a gal with all the jollity of a hanging judge and sleuthing skills to match—round out this fast-paced read for a happy ending (for those left alive).

The Meaning of Matthew: My Son’s Murder in Laramie and a World Transformed
Judy Shepard
Plume
$15

Judy Shepard states unequivocally: “Matt was not our gay son; Matt was our son who happened to be gay.” From the moment on October 5, 1998, when she and her husband, Dennis, were awakened by a phone call from a doctor in Laramie, Wyoming, their lives changed forever. Matt had been attacked viciously, sustaining, among other wounds, lethal head injuries. Shepard sets forth his subsequent death and the publicity it garnered worldwide, as she emphasizes that for most of his short life, he was simply her son, a child to be loved and cherished for himself. Through her grief, however, we see how her will is strengthened, as well as her determination to see her son’s killers prosecuted and convicted. Shepard first heard of the Human Rights Campaign (HRC) at Matt’s memorial service, then attended an HRC dinner, from which she has gone on to use the harrowing experience of her son’s murder in the service of others.