Living Beyond Rainbows • David Marty • iUniverse • $29.95
This memoir by local author David Marty offers a candid view of the life of a gay boy, the fourth of six siblings raised in a Missouri Synod Lutheran home. It makes abundantly clear the fortitude and persistence needed for a gay man to establish himself both in the community and in his own eyes. He’s a second-generation chiropractor who has a healing instinct for working with people with AIDS and elderly patients. Marty uses his longstanding friendship and professional relationship with Esther, in her 90s when we meet her, as a spiritual thread to knit together his narrative. Having outlived two husbands and many caretakers, she is able to provide a strong role model for acceptance and self-esteem, to help teach her young gay friend that life is indeed a gift to be cherished. Marty, who has worked in his chosen profession for more than 30 years, currently lives with his partner of 23 years—and their dogs—in Minneapolis. 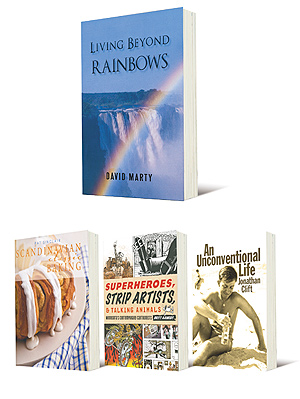 Superheroes, Strip Artists, & Talking Animals: Minnesota’s Contemporary Cartoonists • Britt Aamodt • Minnesota Historical Society Press • $29.95
Would you have guessed that 23 Minnesota cartoonists were plying their work among us? Aamodt has winkled them out, and coaxed them to talk about their work, which encompasses comics, graphic novels, editorial cartoons, minicomics, and the expanding field of web comics. She has included bios of the chosen artists with informative information on how they came to be cartoonists: ur-prodigy Christopher Jones of Dr. Blink: Superhero had a published strip at 10. Most, like Doug Mahnke, stress the importance of discipline and hard work. Others include Kirk Anderson, Gordon Purcell, Britteny Sabo, and Barbara Schulz. Aamodt deals here specifically with contemporary artists, but old-timers can’t forget that Wally Wood, the great EC/Mad Magazine artist, was born in Minnesota, and that even the incomparable Carl Barks of Donald Duck fame did time in Minneapolis in 1931 on the Calgary Eye-Opener.

An Unconventional Life • Jonathan Clift • Lulu • $11.51
Clift uses an interesting voice for his main character, John, a young gay man coming of age in pre-AIDS 1960s Britain. John narrates his story in a direct, forthright, in-the-present manner that lends a certain freshness and naïveté to his voice. Loosely based on the author’s own life, the story starts with teenager John attracted to, then seduced by, his friend, Mark. John, who always has assumed he will be married by the time he is 25, believes their affair is just a youthful crush. However, when Mark and he are parted, and John enters the Royal Air Force, he realizes that he is gay. He recounts his first gay sexual encounter there, including a real love for an officer named Joe who is sent away to a foreign post as punishment. John is reunited with, then loses, Mark, and finds, then loses, another. In the end, John reaches a plateau of self-acceptance and inner peace. The sequel is A Smoldering Flame.