Teresa Gowan, Assistant Professor of Sociology at the University of Minnesota, distilled five years of fieldwork among homeless men in San Francisco into this compelling ethnographic study. Not merely looking on as an outsider, she lived among her subjects, participating in daily rounds of can and bottle collection, as well as dumpster-diving. She became immersed in their lives and thoughts about themselves as part of the dispossessed. Gowan posits that three constructions of poverty prevail when dealing with the homeless: “sin,” or moral laxity, sees the individual at fault, requiring punishment and exclusion; “sickness” also involves a weak individual, who needs treatment; and “system” blames the reigning social structure, which leads to social change and regulation. None of the three, the author argues cogently and articulately, deals adequately with the problem. While Gowan, who dubs herself “a small, white English woman,” worked in San Francisco, her findings resonate with all of today’s homeless populations, including those in the Twin Cities. 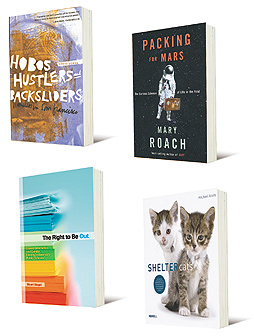 Mary Roach, author of Bonk (previously reviewed in this column), in Packing for Mars bends her considerable humor and exhaustive investigative skills to the question of just what it will take to enable humans to spend the necessary time in space to reach the Red Planet. Information from the Right Stuff guys, who actually rode the moon rockets, heavily was vetted and sanitized for home consumption. The author interviewed, plus trolled through thousands of pages of documents (“Where No Flag has Gone Before: Political and Technical Aspects of Placing a Flag on the Moon”), eliminating nothing from her scrutiny. Elimination is, in fact, a topic of consuming fascination for both NASA and her: vomiting in one’s space helmet, Positional Trainers, free-floating waste, and other TMI but timely matters. She enjoyed parabola-flying-induced weightlessness; unflinchingly observed a cadaver (Subject F) crash test; and ate NASA space food. In sum, Roach herself should be nominated to board the first Mars rocket.

The Right to Be Out: Sexual Orientation and Gender Identity in America’s Public Schools
Stuart Biegel
University of Minnesota Press
$19.95

Stuart Biegel divides his discussion into two sections: “The Law,” from 1968 to the present, and its current application to the right to be out; and “Public Policy,” the implementation of this right. He stresses that GLBT rights meld both the First Amendment, the individual’s right to express an identity; and the Fourteenth, the right to be treated equally. Without denying the long road to travel before these rights are granted to GLBT students and teachers, homosexuality often is a firing offence, while students, presenting or not as gay, are bullied to the point of dropping out or even to suicide. As an out man who himself suffered isolation and harassment from his sexual orientation, the author brings both passion and intelligence to his subject. Biegel presents case studies in each of the two sections, stressing the benefits for all citizens, gay or straight, in having everyone’s equal rights recognized and respected. A valuable resource for the lay or professional reader.

Shelter Cats features the photography of Michael Kloth, a fine-art photographer specializing in portraiture and animal photography who works particularly with adoptable animals at shelters near his home in Richland, Washington. While this volume is filled with marvelous feline images (with an individual animal’s names and adoption status), it also serves to raise the viewer’s awareness of the plight of so many animals not adopted that will not have happy endings. These 80 charming, funny, poignant color photos will delight any cat lover. Shelter Cats is the perfect choice for gift-giving in the not-far-distant holiday season. The book has a “who’s who” at the end, with a bio of each subject; some useful tips on photographing cats; and a list of charitable organizations in the United States, United Kingdom, Canada, and Australia that work to serve and protect these unique animals. A portion of the proceeds from Shelter Cats benefits the American Society for the Prevention of Cruelty to Animals.