This informative, accessible guide tailored specifically for Planting Zones 3, 4, and 5 is a must for local gardeners looking to delve into this new, blue horticultural technology. Raingardens, simply put, are gardens set into depressions—existing or man-made—that are designed to catch and control rainwater runoff in your yard. As the authors emphasize, a raingarden will provide an attractive landscaping feature while utilizing plants to mitigate drainage or erosion problems. Clearly set forth and amply illustrated, the text leads the reader through chapters like “Understanding Water Flow on Your Property” and “Places to Avoid,” as well as describing in detail how to plan and landscape a garden tailored to your property. The extensive chapter on “Raingarden Plant Choices” has 29 pages of plants, names, and requirements—an excellent resource for any gardener. The book even has blueprints for sizes and types of gardens—what to plant when and where. This excellent resource ranges from the general to the very particular. 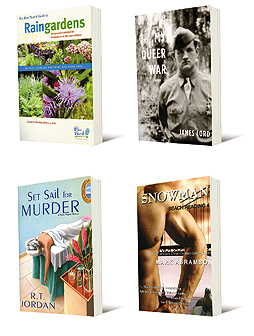 Lord’s memoir is at once a coming-of-age and a coming-out, as well as a record of disillusionment with his fellow man. His narrative opens in 1942, when he was 21, a newly minted soldier, using language that lapses into juvenile pretentiousness, then matures, as does the author, throughout the book. He mentions his diaries, and it would seem that when he wrote My Queer War in his later years (he died in 2009), he drew directly from them. This intimacy of language uniquely colors Lord’s descriptions of events: his flowering sexuality in Boston’s gay haunts, and his brash visits to Picasso in Paris. Lord fired but one shot during his military service, but the things he saw and lived were etched into his soul, teaching him: “The drama of imprisonment applies to the captors as pertinently as to their captives. The dehumanizing factor inevitably prevails whenever captors not only administer with impunity but superintend with complacency the misery of their prisoners.”

Not chick lit, not a gay romp, R.T. Jordan’s Polly Pepper novels defy categorization—until you notice on the jacket blurb that Jordan “is a senior publicist with the Walt Disney Studios.” All that in-house backbiting and sarcasm has to come out somewhere. What better venue than the heavily lipsticked mouth of an aging, yet ever-agile, “iconic Polly Pepper, musical comedy superstar of yesteryear”; her devoted, gorgeously gay son, Tim; and her doggedly loyal, um, retainer, Placenta (I’m not making this up)? Inveigled onto a celebrity cruise by another has-been coworker on the Polly Pepper Playhouse, all Polly wants is undivided attention from her fans and a plentitude of Clos du Mesnil (try a word count on “champagne”). But the detested coworker is murdered, her throat slit by a sharpened DVD of Season Six in the PPP Collector’s Edition, and Polly is off after the killer. Pop a cork, and settle in for a Kool Krooz with Polly & Co.

Tim Snow—“Snowman” to his lover, Nick—finally is recovering from injuries incurred in Russian River Rat, Abramson’s third Beach Reading volume. Warm spring days are emerging. Tim’s restless, and his ever-present leitmotiv of paranoia has kicked in, whispering that Nick, who cared for him devotedly while he was laid up, is tired of him. (Or maybe vice versa?) Tim leaves to “take a break,” getting no farther than the lavish hacienda of Aunt Ruth’s boyfriend, Sam, where Tim learns body parts have been found in the dumpster behind Arts, the restaurant where Sam works. The plot thickens, enveloping the usual cast of characters: Aunt Ruth; bar owners Atrie and Arturo; dipsomaniac neighbor Teresa; Nick; Adam, a hunky straight black man to whom Tim disturbingly is attracted; and Dianne, Tim’s loathsome Texas cousin. Abramson escalates the plot nicely, ratcheting up the suspense and macabre ambience, all the while preparing the reader—and Tim—for the revelation of some long-kept family secrets.