Here, 100 beautiful gardens presented in 500 gorgeous photographs offer hours of pleasure and yearning. But even if you never will be the tender of gardens of these dimensions, each one offers insights on how to explore colors, textures, shapes, and settings in your own patch of ground. Lest you think that inherited acres are required, consider Glebe Place in Chelsea, where a rooftop has been filled with 3,000 pots featuring trees, shrubs, annuals, and perennials, all hand-watered—on a carpet of artificial grass. An inner-city oasis on Kensington Road, Bristol, fits two decked levels with seating, along with Italianate garden, eclectic statuary, stumpery (picture a rock garden with pieces of dead trees instead of stones), grotto, and pond—all in 18×20 feet. As the author notes, “No space is too small for a fabulous garden.” A number of gardens are shown in the winter’s frost—a lesson to Minnesotans to plan ahead for stark shapes and spare beauty. 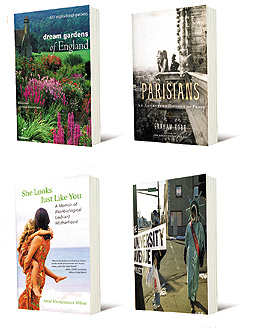 Robb, author of Strangers: Homosexual Love in the Nineteenth Century (2004), takes the reader on an excursion through Paris history via odd—but true—anecdotes: the real-life Mimi of La Bohème; a young Napoleon losing his virginity; and Marie Antoinette’s wrong turn that cost the queen her head. As in Strangers, Robb’s meticulous attention to detail and eye for the arcane make for fascinating reading. The chapter “Marville,” for example, opens with the photograph of a Paris square one summer morning in 1865. It was one of thousands taken by Marville and his assistant of areas of the sprawling city. The narrative segues to the offices of Georges-Eugene Haussman—the very Baron Haussman who demolished, straightened, and changed the face of Paris under Napoleon III, using, in part, Marville’s images. And that square? It endures, the Place Saint-André-des-Arts, shown in a recent photo with a parked Citroën visible at the curb.

A fascinating sociological, anthropological, ethnological odyssey about one woman’s becoming a (nonbiological lesbian) mom—as well as an homage to lesbian processing. The latter is not stereotyping on Miller’s part, but rather the author’s claim: “Lesbians, a least the ones we know, have a strong predisposition to be process junkies….There is a weird, almost manufactured intimacy in the habit of telling each other our secrets before we tell each other our interests.” Ten years of talking, then nine months of conception and production, went into creating little Hannah, not counting the love, fear, insecurities, hopes, and dreams that link these parents to all other parents-to-be of whatever gender. Miller herself tried to conceive, but her partner was the one to carry Hannah. Funny, wry, touching, and celebratory as this memoir is, Miller makes us aware we still live in a world where a same-sex partner must adopt her own daughter—we have a ways to go.

Photographer Wing Young Huie continues his work in “The Language of Urbanism,” started some years back when he photographed the neighborhood of Duluth where he grew up. In the Twin Cities, he produced Frogtown: Portrait of a Neighborhood in 1995. He then spent four years photographing Lake Street, which in 2000 turned into a six-mile gallery featuring nearly 700 photographs displayed in store windows, at bus stops, and on the sides of buildings. The images in Lake Street USA ranged from 8×10 inches to 8×12 feet. Huie’s latest University Avenue project was conceived in 2006 when Coen+Partners asked the photographer to help redesign Dickerman Park along University Avenue between Fairview Avenue and Aldine Street in St. Paul. It morphed into the larger project featured here. In these photos, Huie captures not only the street and its residents, but also the words of the people themselves.