You always can admire Paris from afar, but once you’ve strolled her quais at night, and seen the autumn gold of chestnut trees along the Seine, with the sun piercing slate-gray sky to halo rain-streaked mansard roofs—she’ll have your heart forever. This magnificent volume offers 350 full-color illustrations, plus four stunning gatefolds, of la Ville-Lumière. The 496 pages include a rich text to accompany paintings that start with the Limbourg Brothers (circa 1385-1416), and move forward chronologically to the 21st Century. David, Fragonard, Fantin Latour, Caillebotte, Bonnard, Degas, Matisse, Chagal, Doisneau, and Capa are just a few of the artists. As Professor Lobrichon notes, “…an image—be it a photograph or a painting—is never an immediate reproduction or a simple reflection of reality; it instead delves into the inmost depths of society.” This substantial volume is enjoyed best on a spacious tabletop, allowing plenty of time to browse. 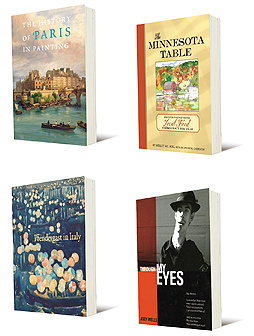 You sit down for a quick look-through, but find, an hour later, that you’ve been going page-by-page, reading Holls’s fascinating text, covering aspects of ricing, the raising of bison, and the revelation of the real rutabaga capital of the world. In Holl and Carpenter’s own term, it’s a culinary travelogue that starts in April, with asparagus and lamb, and travels through the seasons to December’s lutefisk and around. The authors venture statewide, ferreting out a communion-wafer factory; talking with the Yak Man about the virtues of yak brats and dark ale; and visiting Native Harvest on White Earth Reservation, where Native Americans hand-harvest wild rice. Holl provides mouth-watering photographs and delicate watercolors. Carpenter offers unexpected recipes, including “Lena’s Rutabaga Malt,” “Spicy Vietnamese Long Beans,” “Bison Chili,” and “Roasted Garlic Custard”—all Minnesota-grown. A list of growers and producers lets readers chart their own explorations, or pick their own produce.

This volume of Maurice Prendergast’s groundbreaking body of Venetian paintings is presented here in association with Williams College Museum of Art and Terra Foundation for American Art. Prendergast (1858-1924) moved with his family from St. John’s, Newfoundland, to Boston, where he was educated. He spent nearly four years studying art in Paris before his two trips to Italy. His interest in Venetian history—and that city’s emergence into a prosperous present, with its growing tourism trade, and concomitant celebrations and events, both secular and spiritual—put him in the forefront of American Modernism. Prendergast observed people, and what we might call semiotics, faithfully rendering dress, Venetian flags, and banners. His canvasses burst with public life—bright colors of the crowds by day, and lights sparkling on the restless waters at night. Six essays include Jan Andreas May’s “A Terrible Impressionist Mania Now Prevails: Against Modern Art in Venice Around 1900.”

These poems celebrate Joey Wells’s first 21 years—an existence both daunting and empowering—accompanied by his black-and-white illustrations. Born in 1987, he was diagnosed with myotubular myopathy, a rare neuromuscular disease that causes low muscle tone and diminished respiratory capacity. “’03’ mind state” relates a near-death event—one of many—that required the 16-year-old, like many youngsters with the disease, to be trached to keep him alive. Nevertheless, two years later, he went on to college to obtain his business degree. While maintaining a 3.25 GPA, he founded—and still plays on—a wheelchair soccer team, and received the Robert Ross MDA (Muscular Dystrophy Association) Personal Achievement Award. Wells to his mother: “Dear Momma,/I promised you three things/when I was ten years old./Today I can proudly say,/I can cross one of them off. Send you on a cruise/Buy you a house/Make something of myself.” Visit www.joeywells.net.