Art of the Middle East: Modern and Contemporary Art of the Arab World and Iran
Saeb Eigner
Merrell
$69.95

A glimpse into the wealth of art being produced today in the Arab world and Iran, it’s a lush compendium of works in all media not often seen in the United States, featuring 200 artists and more than 450 color illustrations. Making the work accessible to the Western reader is Eigner’s Introduction, as well as some pages on Arabic script that often forms an integral and beautiful part of the artworks. Seven categories of artwork include “Sacred Scripture”; “Literature”; “Music and Performance”; “Politics, Conflict and War”; “History and Identity”; “Portraiture and the Body”; and “Nature and the Land.” Iranian artist Malekeh Nayiny uses computer technology to transform photographs from an old family album, and give them new meaning. Ahmed Moustafa’s The Ship creates a sailing boat on a dark, tossed sea entirely formed from Arabic calligraphy. Kuwaiti artist Sami Mohammed Al Saleh’s agonizingly beautiful Sabra and Chatila is an homage in bronze to Palestinians murdered in 1982 at refugee camps. 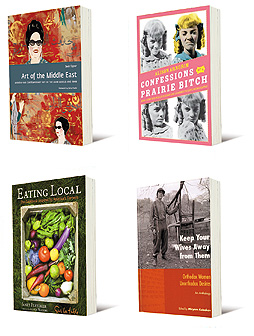 Confessions of a Prairie Bitch: How I Survived Nellie Oleson and Learned to Love Being Hated
Allison Arngrim
Harper Collins
$25.99

Over her years as Nellie Oleson on The Little House on the Prairie, Alison Arngrim grew to embrace the role of “Prairie Bitch,” and to use it in her off-screen life to protect herself. The younger child of two incredibly single-minded theater parents, she was molested repeatedly by her brother, but never received assistance, which forms one of the book’s main themes. Another is a witty and loving remembrance of her years on the Little House set—and her close friendship, continuing to the present, with screen archrival Laura Ingalls Wilder. Arngrim adored her screen “husband” Steve Tracy, whose death from AIDS was devastating, leading her to campaign for a cure. She discovered that California was one of 30 states with the “incest exception,” allowing lesser penalties for abusers who are parent or relatives—the bulk of the molesters. It brought out her Bitch extraordinaire, taking her and the organization PROECT all the way to The Larry King Show after being rebuffed by California politicians. The Bitch prevailed.

Have you ever seen a photograph of fast food that actually says: “Eat me. I’m good for you!”? No? Well, one glance at the cover and interior shots in this handsome book will convince you to try local produce. It looks good, and it’s good for you. The text takes the reader all over the country to look into the fields and families on 10 of the best small farms, one of which is Nitty Gritty Dirt Farm in Harris, Minnesota. Aimed at practical usage, the book’s recipes are organized by dominant ingredient, so that whatever produce is most bountiful at a given time can be utilized most effectively. Alice Waters, owner of famed Chez Panisse, and pioneer in supporting and using community-supported agriculture (CSA), wrote the thoughtful Foreword. An added pleasure along with the photography and toothsome recipes is the opportunity to meet the owners and families on the chosen farms. A wonderful gift book.

This collection of 14 first-person essays is truly eye-opening. Most religions are a challenge for adherents who are also queer, whether gay, lesbian, or transgender. This volume homes in on Orthodox Jewish lesbians: how they have reconciled their commitment to their faith, and how they lead their out lives. For example, “In the Image” has Joy Ladin, Professor of English at Stern College at Yeshiva University, relating the double difficulty of being Orthodox and transitioning. As might be anticipated, some of the women have been cut off from parents and siblings, while others have received an enfolding acceptance. The experiences of these women, as well as their life plans and strategies, not only make fascinating reading, but also are a must for anyone involved in the sociology of gender. The term “Orthodyke” is new to this reviewer. Editor Miryam Kabakov, who founded and facilitated the New York Orthodykes, is currently Director of the Minneapolis Jewish Film Festival.