Warning: You may lose yourself in wonder and awe at the myriad collections of books depicted. A Costa Rican library of 17,000 volumes is raised on stilts to protect it from local damp and termite predation. Books are shelved, piled in the “every available space” technique. Some books fit the architect’s design, and others are the owner’s architecture. A 1670 library in Turin shelves leather-bound volumes by size, surrounding a circular bookcase rising from terra-cotta tiles. In smaller dwellings, one finds dado strips over staircases, while staircases themselves become book repositories. The title, taken from the 10th volume in novelist Anthony Powell’s Dance to the Music of Time, perfectly encompasses the gorgeous photographs. Plunge in anywhere and enjoy, but for the categorically minded, Geddes-Brown has divided the delicacies into “Living with Books”; “Working with Books”; “Designing for Books”; and “Making the Most of Books.” A mouthwatering volume to read—then stack, toss, file, or pile according to your personal library system. 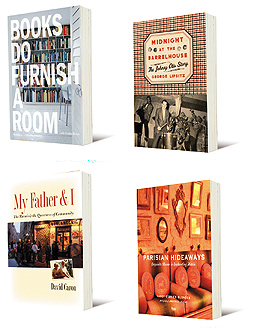 Born John Veliotes in 1921 to Greek immigrants, Johnny Otis (a name he legally adopted later) grew up in a heavily black area of Berkeley, California. Drawn to black music and culture, young Otis became what might be termed “transcultural”—he called it “black by persuasion.” Self-taught, he became proficient on the drums, vibraphone, and piano, but one might say his greatest talent was finding and promoting black artists, and giving them their due—often denied by white-owned record labels. He did not just give lip service to his adopted family, but marched for civil rights, and wrote a column for a leading black newspaper, the Los Angeles Sentinel. In 1941, Otis married Phyllis Walker—in Nevada, because interracial marriages were illegal in California. Highlighting a stellar array of black talent, and the gauntlet they had to run in a white-run world, Lipsitz portrays the hate and bigotry meted out to Greek and other immigrants in 1920s America.

My Father and I: The Marais and the Queerness of Community
David Caron
Cornell University Press
$29.95

Caron observes this oldest of Parisian neighborhoods through the multiple lenses of urban studies, history, sociology, queerness, and filial love. His father, Joseph Gottlieb, was Hungarian, Jewish, French, Israeli—and the parent of a gay son. Caron realizes the implication about himself in his statement, “I have failed as a father.” He muses, “From the family’s institutional perspective, all queer children are failures, since they signify the disruption of filiation.” What community do the two share, then? What defines community? How do they experience the Marais from their different contexts of time, culture, and sexuality? Caron, through a historical sweep from its beginning to the present, touches on the communities of Jews, Chinese immigrants, and gays who have claimed the territory—against the wishes of the state, Caron notes, because the French hold to a “concept of universal citizenship that denies them all political legitimacy.” A moving tale of (often-failed) intersectionality ranging from the intimate to the global and back.

Between these warm, inviting covers nestle 30 Parisian hideaways, where you are invited to stay, corporeally or in your imagination. The book’s endpapers are pleasingly colored maps of the city with all the venues marked—7 cluster closely on the Left Bank around the Boulevard Sainte Germaine, 10 on the northern Right Bank loosely about the upper Champs Elysées and the Arc de Triomphe, while others touch on Batignolles, Montmartre, and Marais. The author has chosen to present three- and four-star establishments for their “authenticity, panache, personalized service, and discretion.” One criterion, family or manager ownership, is reflected in the intimacy and attention to detail shown in the photos. For example, the Pavillon de la Reine, in the heart of the Marais, was built to honor the royal marriage of Anne of Austria to Louis XIII in 1615 (when they were both 14). Each illustrated vignette is accompanied by the address and website for your traveling convenience.