Protagonist Jo Spence found her lover, Zoey, in Jen Wright’s first book, Killer Storm (2007). As Big Noise opens, the couple is ensconced in a friend’s cabin in the deep Northwoods on a “vacation.” Readers familiar with Jo—who herself concedes, “Trouble has a way of finding me”—can settle back, and wait for the inevitable. Actually, it’s already here. Back in Duluth, a colleague had asked Jo to keep an eye out for Rick, a troubled young man she had worked with as a probation officer supervisor—he last was seen in Big Noise, their tiny “romantic getaway” village. When casual inquiries escalate to a confrontation with an obsessed serial killer, Jo once again is overwhelmed by the danger her chosen profession poses for Zoey. Wright’s background in juvenile probation and her own life with her partner on Lake Superior’s North Shore provide a realistic background for her writing—a satisfying read. 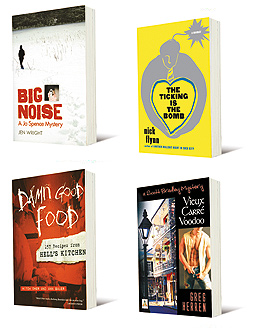 Damn good food—damn good read. This compilation of unique recipes, family-generated and tweaked to perfection by local Hell’s Kitchen owner Mitch Omer, sublimely is complemented with text by Ann Bauer, along with wonderful family scrapbook photographs. As fabulous as the food and Hell’s Kitchen’s tell-all recipes is the shaggy-haired Omer’s larger-than-life story—a soul tossed on stormy seas of manic depression, drug/alcohol addiction, and obesity, finally finding a (relatively) safe harbor with wife Cynthia, family, and close-knit fabric of friends (of whom Bauer is one). Just a hint of treasures within: Mahnomin Porridge, a recipe Omer adapted from a 19th-Century Cree dish, with wild rice, hazelnuts, dried blueberries and cranberries, maple syrup, and whipping cream. Lobster Tacos involves, in part, two pounds of chopped lobster tails, white wine, butter, and cheese. Highly recommended for either active or armchair cook.

This is not a linear memoir, but a kaleidoscope chronicle of an expectant father contemplating bringing a new life into this world. It’s a view through the lens of author Flynn’s own life, and his obsession with the photographs of the tortures US troops perpetrated on their prisoners at Abu Ghraib. He writes of his 2007 meeting in Istanbul with some of the men depicted in the infamous prison photographs. Through many short, mosaic chapters, he returns ceaselessly to his alcoholic father, as well as to his mother, who committed suicide when he was a junior in college. Of the many short chapters that link thoughts or raise new speculations, shared parts of his mother’s suicide note linger in the mind, underscoring the fragility and randomness of mortal life. Her last words: “Everybody knows each other so much longer.” Her enigmatic beginning sentence: “I don’t know why I chose today to begin.”

This is the fourth of Herren’s New Orleans Scotty Bradley series (Bourbon Street Blues, Jackson Square Jazz, and Mardi Gras Mambo). Nothing’s average about Scotty (né Milton) Bradley: his thong-clad go-go dancer past; his perfect ex-FBI boyfriend, Frank; Colin/Abram, the on-again-off-again spy in their ménage à trois; the myriad corpses scattered about or dropped onto him; his loving, lefty parents and their Devil’s Weed tobacco shop in the Vieux Carré. The latest book involves the murder of an old family friend who with cohorts 40 years before stole the sapphire eye of Kali from a statue in tiny Pleshiwar, a microcountry noted for its bloodthirsty religion and untapped wealth of uranium coveted by the “civilized” West. As the story opens, Frank is off pursuing his dream of becoming a professional wrestler, but, of course, he returns to help right prevail. Herren makes one’s inner Fanboy beg: “Where do you get your ideas?”