C.M. Harris’s riveting first novel (nominated for a Lambda Award) weaves family, fundamentalism, gender, and love through the lives of four members of the Midwestern Potterite sect. Glory Potter, daughter of the Potterite reverend leader, first appears as a 10-year old tomboy. She has feelings for her playmate, Em, consummated only years later (then suppressed) after Glory has become Reverend, known to the Gulliver congregation as Mother Glory. 1942: Seb Brickman, confined to a conscientious objector camp, yields to his desires with a fellow detainee. 1983: Em’s granddaughter, Danielle, suffers the confines of religion and the pull of her sexuality. 1970: Jacob Carver is overwhelmed by his discovery of Mother Glory’s secrets and the possibility of love with a trans woman. Three lives are burdened by the weight of Mother Glory’s legacy. In lesser hands, melodrama, but Harris deftly explores each character’s methods of handling the life he or she has been dealt, revealing how inexorably dogma and rigidity roll down the generations. 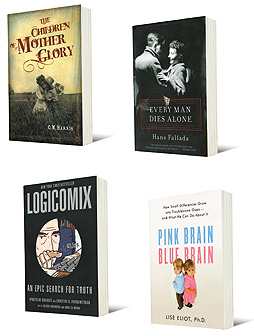 Hans Fallada (né Rudolph Ditzen) based his 1947 novel on the true story of Elise and Otto Hample. A working-class couple living in Berlin under Hitler, they undertook, after Elise’s brother was killed in the war, a nearly three-year anti-Nazi propaganda campaign. Over time, they flooded Berlin with handwritten postcards advocating civil disobedience. Eventually, they were captured and beheaded. Fallada himself emerged severely damaged by a lengthy imprisonment in a Nazi insane asylum. Given the Hample dossiers by a friend, he forged the material into fiction that conveys the prevailing atmosphere of fear, oppression, and cruelty, perpetrated by both the Nazis and ordinary citizens trying to survive at any cost. He paints the husband as a taciturn, uneducated man who becomes consumed with his mission, and who eventually understands his deep love for his wife. Fallada never recovered: He wrote this extraordinary book in 24 days, dying shortly before its publication. This is the first English translation.

Who’d have thought a graphic novel based on the early life of philosopher/mathematician Bertrand Russell (1872-1970) would be an engrossing read? Obsessed with the idea of establishing a logical foundation of all mathematics, young Russell encounters every big name in the field—Kurt Gödel (remember Gödel’s Proof?), Gottlob Frege, David Hilbert, and Ludwig Wittgenstein—while his monomaniacal pursuit drives him nearly to the brink of madness. Writers Apostolos Doxiadis and Christos H. Papadimitriou are part of the story, ushering the reader through the thickets of logic, while offering a caveat about their work. Apostolos reminds: “This is what 99.9 percent of comic books are, an honest-to-god, real yarn. Simply, a story!” Artists Alecos Papadatos and Annie DiDonna join in throughout the book, adding a framework for the historical segments. Admittedly, much license has been taken with timelines and a few factual bits. Anomalies are discussed in an afterword, “Logicomix and Reality”—untruth forming the basis for an “epic search for truth.”

It’s not all hard-wiring, hormones, and essentialism—“it” being differences in the brains of little girls and little boys. Author Lise Eliot is Associate Professor of Neuroscience at the Chicago Medical School of Rosalind Franklin University of Medicine and Science. She began her studies with the theory that it would be a matter of comparing studies of the differences between the brains of boys and girls, and going from there. However, she found recent studies in plasticity showed that the brain changes in response to experience: “Your brain is what you do with it.” If that is so, Eliot notes, then certain measurable differences—little boys develop fine motor skills, e.g. writing, later—can be countered by teaching boys to type earlier, while lesser skills of little girls in spatial relations can be aided by giving them blocks to manipulate. Eliot offers parents insights into their own gender-influenced behavior and their children’s own gender biases, along with methods to help both girls and boys develop their potential.