This is a striking work, 10 years in the making. O’Toole’s 150 black-and-white photographs, reminiscent of Atget’s work in their ability to convey the intimate and enduring Paris, illustrate a collection of 14 walking tours about the City of Light that includes the Buttes Chaumont, Père Lachaise Cemetery, and the Luxembourg Gardens. Text, written by O’Toole and translated by Daniel Ollivier, is presented in French and English on facing pages, a very pleasing treat for the Francophile, while the maps accompanying each walk were created and hand-drawn by O’Toole’s partner, Tim Schultz. This handsome self-published volume has received wide praise and numerous awards, including the 2008 Star of Excellence Best of Merit Award from the Minnesota Printer Industry. It not only has gone into a second printing, but also has been chosen by both Minneapolis Institute of Art and Walker Art Center for their gift shops. Highly recommended for the photographer, traveler, and avid bibliophile alike. 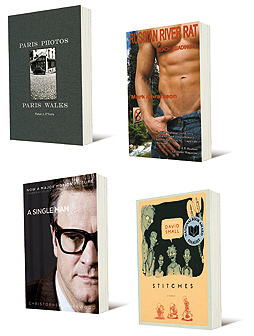 Book Three of Abramson’s Beach Reading series finds protagonist Tim Snow’s beloved Aunt Ruth moved to San Francisco, and Tim himself finally in love with the perfect man. Oh, really? Tim and Nick begin the “If he really loved me, he’d call first” dance, against the background hum of murder and intrigue, plus the ongoing lives of the wonderfully quirky denizens of Abramson’s Snow’s Castro. Then, Tim finds more anomalies in Nick’s background: a Big Easy cop cousin who turns up as the drowned body fished out of the Russian River, and lurkers from the past out to destroy…whom? Abramson can tie more complicated knots and entangling nets than a 19th-Century sailor, his catch prolific and entertaining. Don’t mind that the temperatures are falling (especially back in Tim’s native Minnesota): “Beach” is a state of mind, and Beach Reading can be done as enjoyably under an electric throw by the fireside as slathered in SP 40 by the lapping waves.

The University of Minnesota Press, together with the Weinstein Company, has reissued the late Isherwood’s A Single Man (1964) to coincide with the upcoming release of the film of the same name, directed by Tom Ford, and starring Colin Firth and Julianne Moore. This fortunate reissue enables modern readers to access this novel, which, for its time, gave a shockingly sympathetic portrayal of George, its homosexual protagonist. Taking place during a 24-hour period, it skillfully reveals the inner and outer life of 58-year-old George, still grieving the death of his partner. The two had lived in a secluded bungalow in a relentlessly heterosexual LA neighborhood, reachable only by a footbridge—“As good as being on our own island.” Now alone, George sees himself at a remove, going through the motions of his past life, tentatively reaching out to the new, while coping with the isolation that inevitably faces us all. An absorbing, worthwhile read. The film opens in US theaters December 11.

Author/illustrator Small has the shuddersome ability to recreate the hellacious home life he underwent before becoming the prolific children’s book illustrator he is today. As a child, he knew exactly where the wild things were: right there at home—in the kitchen, at the dinner table, anywhere with Mom. At 14, he was taken to the hospital for a “minor” operation, and awoke able to utter only, “Ack?” No one had told him he had cancer before. No one discussed or explained it after. The breakthrough, the turnaround, and the beginning of healing and health began only after a psychiatrist—depicted here as a white rabbit in vest, stick-pinned cravat, and plaid suit—tells the boy, “Your mother doesn’t love you.” It’s a brave tale told in few words and a wash of browns by a man who went on to regain his voice, in speech and through his art. Small’s awards and books include the Caldecott Medal and Imogene’s Antlers.