Readers of Brown’s Sister Jane and Sneaky Pie Brown mysteries know her passion for animals—great and small. Along with country mayhem, her books are filled with her friends and cohorts: horses, hounds, cats, Corgis, possums, owls, and serpents. In this poignant memoir, the best-selling author, screenwriter, and poet shares with us anecdotes that will resonate with anyone who ever has loved and lost a dear creature. Brown’s clear opinion is, “There’s no such thing as a dumb dog, but God knows there are continents filled with dumb humans.” Raised by Southerners to work hard, play hard, and learn from those around her, she grew up learning to recognize, appreciate, and cherish her four-footed livestock and all wild things. A dedicated foxhunter who feeds and tends to her local foxes, Brown is a woman at home in her own skin and at one with nature. Meet Franklin, Susie Q, Tack, and others in a book well worth reading and gifting. 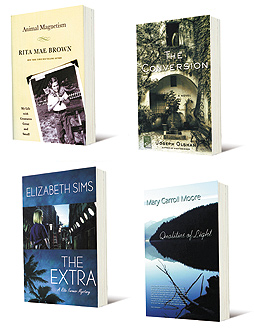 In this intriguing eighth novel by the author of Clara’s Heart and Nightswimmer, Russell Todaro, a young and talented translator, continues to live in Paris after the death of his lover, renowned American poet Edward Cannon. Struggling to adjust, Todaro is caught up in ever-tightening circles of revelation about himself, his lover, and the contents of Cannon’s unfinished memoir—that he discovers paints him in an unflattering light. Much of the novel takes place in Italy, where Todaro is received by the dowager owner of the Villa Guidi, which during World War II sheltered a Jewish family that later converted to Catholicism. That the novel is narrated in the first person lends immediacy to Todaro’s fears and confusion, all of which come home to roost in his lover’s memoir, sought for publication by his American agent. In the end, Todaro is forced to embrace his own epiphany in order to be free of the past and liberated to seek his future.

Sims’s second Rita Farmer mystery finds the character garbed as a cop on the set of a third-rate mystery film, The Canary Syndrome. Finding a live roach in her box lunch, she roams off-set for sustenance, only to save a young man from a fatal beating. The plot thickens incrementally as Sims deftly weaves together all the threads: Rita; her mooching sister, Gina; her wannabe boyfriend-cum detective, George; her alarmingly precocious 5-year-old son, Petey; and Amaryllis B. Cubitt, sainted philanthropist with a secret past, whose grandson was attacked in the opening pages. Looming over them all is Dale the Whale, drug lord with a self-help plan to service tout LA. George and Rita double as skag addicts pursuing undercover work. Let’s not forget Ernest, the missing champion stud Beagle, and the roaming pack of feral LA dogs that nearly devour George. Take this not as a “review,” but rather ingredients for a Julia Child-like mystery bouillabaisse recipe for murder. It works.

Acceding to his birthday request for a clandestine boat ride, 15-year-old Molly Fisher takes her little brother out for a spin, when he falls overboard, and nearly drowns—lying comatose in a nearby hospital as the novel opens. While the Fisher family’s summer vacation draws to an agonizing close, Molly, on the cusp of young womanhood, struggles with a number of aspects of light and darkness: her forbidden love for an older girl; her parents’ affections; her own artistic gifts overshadowed by the brilliance of her father’s genius; and her changing relationship with her now-damaged sibling. In Moore’s gifted hands, Molly is a highly nuanced yet highly believable character—now wise beyond her years, she’s dreading the loss of not only childhood, but also her beloved brother. Moore’s deft characterization of Molly was drawn in part from her own painting background. It has garnered a nomination for this year’s PEN/Faulkner Award. Moore teaches at Minneapolis’s Loft Literary Center.