Bill Gaines, owner/publisher of MAD Magazine, said, “Harvey was looking for perfection in a 10-cent comic book.” In the opinion of many, Harvey Kurtzman (1924-1993) came as close as humanly possible to achieving that goal. Authors Denis Kitchen and Paul Buhle explore Kurtzman’s life, art, and writing in its myriad manifestations—the son of Russian-Jewish immigrants; his years at New York’s prestigious High School of Music and Art (with future cohorts Will Elder, Al Jaffee, John Severin, and Al Feldstein); the MAD years, through Playboy (“Little Annie Fanny,” with Elder), Trump, Humbug, Help!, etc. The volume is dense with illustrations, photographs, roughs, and sketches—many previously unpublished. Kurtzman, through his innovative work in the early MAD comics, Humbug, and Trump, introduced generations of youngsters (including this writer) to parody, satire, and the realization that grown-ups often lied. Comic genius R. Crumb acknowledged, “Even though I’ve made a name in my own right, I still feel like a worshipful fanboy.”

The Complete Guide to Transgender in the Workplace
Vanessa Sheridan
Praeger
$39.95 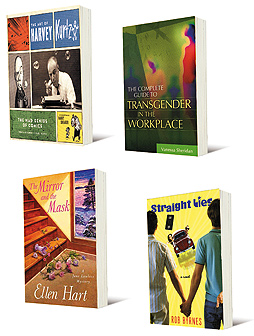 Vanessa Sheridan’s comprehensive guide for employers, coworkers, and transgender individuals in the workplace marks an invaluable resource in a field where many gray, confusing areas still exist. “Transgender” is a concept that frequently is difficult to understand, sometimes even for the transgender individual, so it is both calming and instructive to see it discussed so thoroughly and clearly as Sheridan has done. The book has explanatory chapters on being transgender; what it means for that individual, and for those sharing the same workplace; how to work with and for transgender customers; and what legal protections are currently in place for the transgender worker. It has tools for coming out at work and for organizational leaders. Sheridan herself is transgender, thus able to bring a lifetime of experience, as well as nearly 20 years of research, writing, and speaking nationally on transgender issues. She works as a corporate consultant, speaker, and transgender awareness trainer. Her published work includes Transgender Journeys.

The Mirror and the Mask: A Jane Lawless Mystery
Ellen Hart
Minotaur Books
$25.99

Ellen Hart always delivers. Jane Lawless, here in her 16th appearance with her eccentric group of friends, as usual, grips and delights the reader. Restauranteur Lawless, like many Twin Citians a victim of the tightening economy, has had to put plans for a third restaurant (she owns the Xanadu Club and famed Lyme House) on hold. Teetering on the cusp of her 45th birthday, she still is suffering from a messy breakup with her former lover, Kenzie Mulroy. Things could be better, Lawless is thinking. Ah, but they could become much worse, Hart decrees. And so they do. Lawless decides to take up a friend on an offer of training to become a private investigator. She hires Annie Andrews, an intriguing young stranger, to help at the Xanadu. Lawless is embroiled inexorably in her first professional case: the finding of Annie’s father. When the wife of the possible missing dad dies suddenly, life indeed becomes far more complicated—and potentially lethal—for all involved.

Like the sun over the yardarm, it’s always summer somewhere, and Straight Lies is an alpha summer beach read. Byrnes is the author of Trust Fund Boys, whose con-boy hero, Jamie Brock, resurfaces here. The bottom line: Romeo Romero, the world’s hottest, openly gayest celebrity, is a closet straight, a fact caught on video by Brock, who then left the tape in a taxi. Erstwhile protagonists Grant and Chase, small-time hustlers looking for “The Big One,” learn from Brock about Romero’s hot tryst with a female in a Hampton’s hot tub. Once the three learn the tape is in the office of a notorious gossip columnist, it remains only to break and enter, steal it, storm Romero’s gated Hamptons retreat, and claim their ransom. Byrnes spins a plot as complex as Rififi or Topkapi around a cast with the collective IQ of a medium-sized kiwi fruit whose greed and frenzied energies are unlimited. Nothing could go wrong—could it?