A neat mix of the obvious—people who are “different” often are treated badly; the facts—there are blue people (ethemoglobinemia); and a predictably odd rural Southern community in the 1960s. After his mother’s death, 11-year-old (gay) Buddy Dean moves to Comfort Corners in North Georgia to live with his grandmother. He becomes friends with Early Finch, a boy from a local blue-skinned, “blue trash” family. The two find a dead baby discarded in the town dump. By laying his hands on, Early brings it back to life, becoming, with Buddy, the focus of the townsfolk’s cauldron of emotions. As the very entertainingly told story builds to its climax—Early, apotheosized from town pariah to Blue Jesus, a highly marketable commodity for his ne’er-do-well, abusive father—the subtext of friendship and loyalty becomes stronger and more poignant. Early finally agrees to be the centerpiece of a revival, but only under the condition that white, blue, and black alike are welcome to attend. 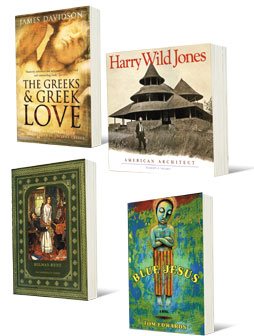 This sprawling, diffuse, and fascinating volume seeks to reset the thinking of the past couple of millennia on the subject of the phrase “Greek love” (comprising mostly male homosexuality). At one end of the spectrum is the Victorian intellectualization and sanitization of the mechanics of such activity, while at the other end, Davidson gives us Sir Kenneth Dover (born 1920), who sees Greek love as more purely the performance of physical acts. Davidson points out that Greece was a widely scattered collection of city states, separated geographically, socially, politically, and so forth, producing a wide variety of approaches to sexual conduct and etiquette. He does not write in standard, dry academish, which is a selling point for the lay reader, but he does have a tendency to a bit jokey, and to expatiate on topics that are not at the fingertips of the nonacademic. However, Davidson does, on the whole, argue his points persuasively. A thought-provoking and challenging read.

This beautifully crafted book is a double pleasure to read. Local author Vandam not only presents architect Harry Wild Jones (1859-1935) as a vibrant, talented, personable human being, but also shows us how much of his existing work can be seen here today. Educated in the East, Wild and his wife moved to Minneapolis, building their residence, Elmwood, in the Washburn Park area, now Tangletown. Prolific and protean, Jones designed homes, commercial buildings, and churches throughout the continental United States, Hawaii, even Burma. Perhaps the jewel in Jones’s architectural crown remains the Lakewood Cemetery Chapel in South Minneapolis. Vandam’s descriptions—“Surrounding the chapel’s sixty-five foot dome are twenty-four Art Nouveau Style stained-glass windows serving as a sundial of masterful proportions.”—spur one to visit. This volume, which has a list with addresses of all Jones’s edifices, is profusely illustrated with photographs and drawings. Vandam is the author of The Doors of Tangletown: A Historical Reflection of Washburn Park (2002).

This volume, which accompanies the current exhibition at the Minneapolis Institute of Arts (MIA), Sin and Salvation: William Holman Hunt and the Pre-Raphaelite Vision, is a valuable work of art history in its own right. The images and the 10 essays offer a rare glimpse into the life and work of Hunt (1827-1910) and his Pre-Raphaelite brothers, including John Everett Millais and Dante Gabriel Rossetti, whose work also is represented. Hunt was influenced heavily by his reading, and many of his paintings were drawn from literature: The Lady of Shallot (Tennyson); Claudio and Isabella (Shakespeare’s Measure for Measure). Hunt added his own interpretations to the original narratives, and rendered his subjects in exquisite detail, using light and shadow, key objects, placement of figures (right=good/left=bad) to convey his intent. This book is a rich read and a splendid holiday gift. The exhibit, which offers more than 60 works, runs through September 16 at the MIA. Visit www.artsmia.org.