This is a handsome volume for browsing, while entertaining dreams. Beyond dreaming, however, use100 Houses as a source book for your own bailiwick: a lighting detail; a kitchen layout; a garden view; a unique utilization of an intractable nook. The hundred spectacular homes pictured here—drawn from a worldwide pool throughout North America, Japan, Australia, and Great Britain, ranging from the truly palatial to ingenious gems on a small scale—show the truly amazing things man can construct for his habitat. Just two examples: The Newington Green House (Prewett Bizley Architects) in London deftly was “squeezed into a scrap of land previously occupied by a burnt-out storage unit”; a second delight is the Ring House (TNA) in Karuizawa, Nagaino, Japan—a three-story tower in the woods, its upper floors are wrapped in alternating layers of glass and timber. The text is brief, and the glossy photographs an abundant feast for the eye, clearly illustrating the featured architects’ styles. 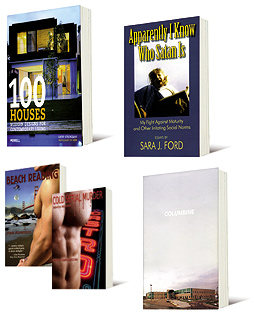 Apparently I know Who Satan Is: My Fight Against Maturity and Other Irritating Social Norms
Sara J. Ford
Seaboard Press
$14.95

The author’s inner self shines through her two earliest ambitions: “One was to be constantly moving, and the other was to eat candy nonstop, preferably while in motion.” Congenitally un-Prufrock, Sara J. Ford devoured life omnivorously, sharing her experiences in these 14 essays: the early years, when at 5 she was granted neither a coveted motorcycle nor a Big Wheel (“Life as a Lightning Bolt Stunt Person”); gender-limited grade- and high-school life (“I Did What I Could”); the miasma of higher education and on into adulthood, which, even with a girlfriend or partner, remains disconcertingly surreal (“Roy and the Toilet Teddy”). I’d call this a coming-of-age memoir, if that didn’t imply Ford, at last, after great and concerted effort, has achieved some fixed goal of stability and maturity. Fortunately—at least for the reader—this is not the message. However, like a hobo’s marks on gateposts, she has left a trail of instructive signs for fellow clueless to follow.

Grab your towel, some SPF 60 lotion, and these first two of author Mark Abramson’s highly entertaining Beach Reading series. He introduces protagonist Tim Snow, Minnesota-born, expelled by his family after an “incident,” taken in by his Aunt Ruth, and now comfortably ensconced in the heart of the Castro, where he has lived for some time. Beach moves along briskly, incorporating a homophobic preacher, a gay icon, joint-toking oldsters, a jolt from Tim’s past, and a bevy of characters you’ll meet again in Cold Serial Murder, including Aunt Ruth. Cold Serial is littered with corpses, one of them Tim’s ex-lover. The epitome of “truth in advertising,” Beach Reading is exactly what it promises. Abramson’s witty dialogue; vivid, sexy characters; and comprehensive knowledge of gay SF, its flora, fauna, and idiom, captivate the reader. Number three, Russian River Rat, will be out later this fall. Don’t worry—it will be as much fun to read under an electric throw as on a beach blanket.

Dave Cullen has crafted what could have been a piece of sensational, voyeuristic journalism about the Columbine school shooting into a respectful and meticulously researched sociohistory. He spent the past 10 years (the 10th anniversary of the 1999 Columbine shootings was April 20) sifting through tens of thousands of documents, hundreds of interviews, and the shooters’ writings and videos. He unearths many errors in the initial media outpouring: Eric Harris and Dylan Klebold were not, as reported, school outcasts; they were not bullied by jocks (nor did they target them); they were not poor students; they did not come from dysfunctional homes. Harris, the leader, emerges as a true sociopath whose primary intent was to destroy the entire school (their bombs malfunctioned), while Klebold, the depressive, probably never would have acted on his own. Cullen’s prose is clear and compelling, and the questions he raises about the origins of this kind of random lethal behavior have yet to be answered.