Everything You Know About Indians Is Wrong

Paul Chaat Smith, Comanche, is Associate Curator of the National Museum of the American Indians at the Smithsonian Institution in Washington, DC. We begin to get a feel for the tenor of the book when he describes this institution as “a bad idea whose time has come.” He sees the danger confronting Indians today as romanticism, a “highly developed, deeply ideological system of racism that encompasses language, culture and history.” 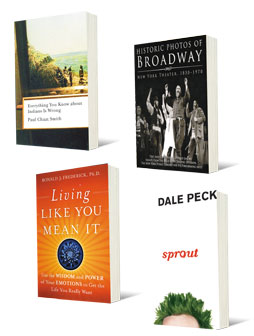 Raised in suburban Maryland and Oklahoma, in the ’70s, Smith was involved in the American Indian Movement (AIM). Now, looking back, he makes his point cogently that there is no true representation of the American Indian—history books, films, etc. may set forth with the best intentions, but are filled with error, and have done harm to their subjects. The 21 essays, written from 1992 to the near present, should be read by anyone who knows nothing about Indians—and most particularly by those who think they do.

What better way to show the proud history of theater? This handsome book, its images culled from the Billy Rose Theatre Division of the New York Public Library for the Performing Arts, reaches back to the 1850s, starting with an early photo of Junius Brutus Booth (1796-1852) and teenage son Edwin (1833-93). The book winds lovingly through the years: names little-known today—character actor Frank C. Bangs, emoting in an 1876 production of Lord Byron’s Sardanapalaus; the well-known—Helen Hayes in Laurence Houseman’s Victoria Regina (1935); and the notorious—the Marx Brothers in The Cocoanuts (1925) and Animal Crackers (1928). Writer George S. Kaufman, watching the incorrigible brothers in The Cocoanuts, is said to have commented, “I may be wrong, but I think I just heard one of the original lines.” Leonard Jacobs, author of 10 plays and director of 40, is the National Theater Editor of Back Stage, and chief critic for Back Stage and the New York Press.

Living Like You Mean It: Use the Wisdom and Power of Your Emotions to Get the Life You Really Want

At the heart of so many of our problems, local author Ronald J. Frederick posits, is fear. Psychologist, life coach, and cofounder of the Center for Courageous Living in Minneapolis, he uses his own experiences, as well as those of many clients he has treated successfully, to explore how to recognize fear within oneself, and the steps to take to deal with it to release energy that has been repressed. The book outlines his four-step approach, which guides the reader to recognize fear; to lessen, then tame and control it; to learn how to recognize one’s true emotions, and mine their possibilities; and finally, to develop effective ways to express and share these feelings. One of Frederick’s most helpful insights is the importance of identifying and claiming—not skating around—one’s emotions. “I feel that my life is a mess” doesn’t have the power or potential for change of “I’m angry that my life is a mess.” Simple—but not simplistic—Fredrick’s book offers healing solutions.

Sprout Bradford lost his mom to cancer when he was 12, and his father whisked him away from his native Long Island to the depths of Kansas, to life in an isolated, vine-covered trailer. Less romantic than it sounds. Sprout’s dad is an alcoholic by vocation and avocation, unearthing wild strands of greenery—including itch plants—to ensnare, not embellish, their more than modest dwelling. The yard is filled with numbered, dead stumps, dried rootballs clawing the air. Sprout is gay. He is called “Sprout” because he dyes his hair green. Kansas boys are supposed to be/do neither. But none of these are the secret with which Sprout starts his narrative: “I have a secret. And everyone knows it. But no one talks about it, at least not out in the open.” Funny and literate, Sprout examines what it means to be a friend, what it means to be true to your self—and what happens when you’re not.