Husband and wife team Diane and Jacob Anderson-Minshall embark on their third Blind Eye Detective Agency Mystery with the same gusto and verve as their previous Blind Curve and Blind Leap. In seemingly separate incidents, a young woman threatens a man at gunpoint; the Blind Eye Detective Agency is hired to find a client’s missing sister; and two 17-year-olds are found dead at the base of a seaside cliff. All threads, however, seem to lead back to the Pioneer Institute, a concertina wire-surrounded residential facility housing an ex-gay youth program that employs electroshock, drug, and aversion therapies on the young inmates. When Director and Founder Dr. Barnabas is evasive about students who have “gone missing,” Tucker, the youngest of the Blind Eye troop, is embedded in the program to get the goods. Stakes are raised with every piece of the picture that falls in place: Are some parents ordering up a “Final Solution” for their gay and outcast offspring? 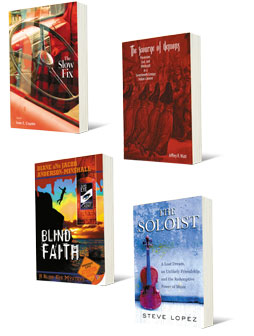 The Scourge of Demons: Possession, Lust and Witchcraft in a Seventeenth-Century Italian Convent

Between 1636 and 1638, 14 nuns at the Northern Italian convent of Santa Chiara in Carpi were stricken ill by a mysterious and devastating affliction that produced—among the symptoms, real or “imagined”—fits, speaking in demonic voices, preternatural strength, and the ability to contort their bodies into unnatural positions for long lengths of time. Three of this order, founded by St. Clare of Assisi in the 13th Century, died. A scholarly volume, Watt’s book is eminently readable, as he follows in detail the twists and turns of the attempted cures, along with the accusations against Sister Dealta and confessor Bellacappa. The testimony of exorcists, as well as the detailed records kept by the Inquisition of Modena, offer an intimate glimpse into the lives of the afflicted and accused—names, ages, backgrounds (mostly well-to-do). Watt’s assimilation of the era’s history, culture, and judicial and medical knowledge makes rewarding reading, and his detailing of the Inquisition’s rigorous, scrupulously ordered court proceedings is eye-opening.

Vancouver-based Ivan E. Coyote’s fourth book of stories, many drawn from her columns appearing in Xtra West, unfolds in prose both lyric and pragmatic. She is able, like a gifted mosaic artist, to pull a myriad of tiny fragments into a whole. The 31 stories collected here may be devoured whole at a single sitting, or parceled out over time and savored. An “estrogen-based form of life,” as she describes herself, Coyote delights in the many forms of gender and sexual variance that are the actual components of what many hold to be a binary society. That she can pass as a respectable alumnus of a Catholic boy’s school is a source of humor, annoyance, irony, or fear—not necessarily unmixed. Just three of these gems are “The Curse?” (on tampons); “It Works Like This” (on giving up bachelorhood for a live-in girlfriend); and “Ramble On” (an 11-year-old’s camping trip with Uncle Jack, and the freedom still to go shirtless).

Los Angeles Times columnist Steve Lopez noted a slight African-American street performer on skid row playing Beethoven on a two-stringed violin. Lopez jotted down “Violin Man,” with the thought of writing a human-interest column. That single column evolved into this book, and thence, into a feature film. Over time, Lopez teased out musician Nathaniel Anthony Ayers’s improbable story. Raised in modest circumstances in Cleveland, he was musical prodigy accepted at Julliard. His talent never was in question, but pressures led him to drop out, and eventually take up his space under LA’s 2nd Street tunnel. The book details Lopez’s efforts to help—to find Ayers a cello (his instrument of choice) to get him off the street into a safe apartment, and to arrange a meeting with famed cellist Yo-Yo Ma. Lopez comes to comprehend the intransigence of some mental illnesses—that the helper as well as the helped inevitably and profoundly are changed—accepting the power of love (and music).