During the spring and summer of 1961—President Barack Obama was born August 4 that year—hundreds of individuals came by car, bus, train, and plane to Jackson, Mississippi, to challenge the state’s segregation laws. At the time, there were no integrated schools or restaurants. The airport, bus, and train stations where the Freedom Riders, as they were known, arrived had segregated toilets and drinking fountains. During that summer, more than 300 people, black and white, young and old, were arrested (beaten, threatened, buses torched), photographed, and booked on charges of “breach of the peace.”

For some unexplained reason, the agents of the Mississippi State Sovereignty Commission meticulously recorded biographical data, and saved the information and mug shots. Mississippian Eric Etheridge (4 at the time) has mined those recently opened archives, and contacted and interviewed many of those Riders. His book is a moving testimonial to 80 of these men and women, rephotographed and speaking to that time—and to our future. 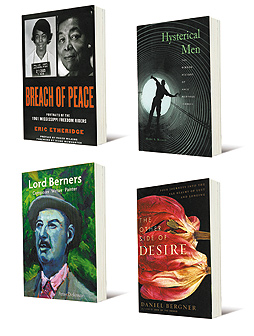 Hysteria, derived from the Greek word for womb, perennially has been a term associated with the female of the (human) species. But who hasn’t known a male or two subject to emotional liability on occasion? Mark Micale has taken a look into periods of time during which male hysteria not only was acknowledged, but also was used nonpejoratively. It turns out that far from being cut-and-dried, the label, applied to males, depends dramatically on the prevailing political and social climate. Micale examines male manifestations of nervous illness in a number of sources, including literature and memoir (e.g., Robert Burton’s 1621 Anatomy of Melancholy), where male hysteria lurks despite medical denial. Given World War I studies of emotionally shattered soldiers by W.H.R. Rivers, and our own dawning awareness of PTSD in today’s military, Hysterical Men can be read profitably to understand that illness may not exist only “in your mind,” but also be determined in the minds of the reigning medical and political hierarchies.

Dickenson has crafted a fascinating portrait of British eccentric and polymath Gerald Hugh Tyrwhitt-Wilson, 14th Baron Berners, who, although likely unknown to the general reader, had a hand in many facets of 20th-Century culture. Lord Berners (1883-1950) was, as is acknowledged in the book’s subtitle, a prolific painter, composer, and writer. His novels and memoirs are still in print, as is his complete body of music (e.g., his ballet The Triumph of Neptune). Here, 32 of his paintings are reproduced, including the endpapers of this handsome volume. Lord Berners, who used dye to color the white pigeons on his Faringdon estate, was the basis for Lord Merlin in Nancy Mitford’s novel The Pursuit of Love. Homosexual? Berners was not of a generation that told, but he was associated closely with the younger (1911-87) Robert Vernon Heber-Percy, friend, companion, and heir. Dickinson provides interviews with noted friends and personalities, including writer Lord David Cecil and choreographer Sir Frederick Ashton.

The Other Side of Desire: Four Journeys into the Far Realms of Lust and Longing
Daniel Bergner
Harper Collins
$24.95

Through the lens of so-called abnormal desire, New York Times Magazine staff writer Daniel Bergner probes the question of who we are sexually; how we get that way; and whether there is, for those residing on the “other side of desire,” a path back to normalcy. Through interviews with experts and analysts, sexologists and the subjects themselves, Bergner fleshes out four individuals whose lives revolve around their own consuming and uncondoned desires. The subjects, whose paraphilias (“sexual desires and behaviors which are atypical or extreme”) he explores, are: Jacob, a happily married foot fetishist; the Baroness, a dominatrix; Roy, under near house-arrest after his advances on his 12 year-old stepdaughter; and Ron, an advertising art director who is attracted only to amputees. Bergner draws us into the worlds of four human beings, while deftly weaving around them questions and issues germane to all: Does sexual desire spring from social or biological constructs, and is female desire innately different from that of males?