John Michael Lerma never met a pie he didn’t like. Or, that he couldn’t make sound appetizing and accessible to the most untutored cook. Long known to Lavender readers through his “Off the Eaten Path” and “Word of Mouth” columns for his zest and joie de vivre in all things gustatory, in this, his second book, he openly declares his weakness for flaky confections (see also his first, Garden County, Where Everyone is Welcome to Sit at the Table). Lerma has the gift of sharing—food, expertise, and enthusiasm—and encourages readers to explore. 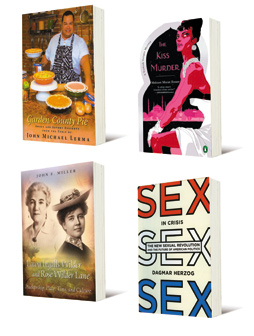 “Take my recipes and make them your own,” he urges. “You have my permission to go wild…and create something fantastic.” Let’s see, will that be Captain Tony’s Watermelon Pie, Lerma’s famous Vidalia Onion Pie, or the Carpe Diem Blueberry Pie? Dig right in for a good read and toothsome results. One more exhortation from Lerma: “Enjoy my recipes, and don’t forget to sing while baking.”

For those unfamiliar with Somer’s unique sleuth, already a favorite with readers in his native Turkey, here’s your chance to read the first installment, The Kiss Murder. We never learn his/her name (by day, he is a savvy computer technician, and by night, she manages-part owns an Istanbul drag queen nightclub). Because she (to pick a pronoun) narrates, we learn only what she wants us to know about her. “With the right makeup,” she glows, “I’m transformed into a glamorous star of Hollywood’s Golden Age. My all-time favorite is Audrey Hepburn, that boyish beauty.” Regarding herself on page one, she remarks, “Perfect, once again. I blew myself a big kiss in the mirror.” In this first intrigue, one of her club girls is murdered after becoming entangled in a blackmail scheme. Our Thai Kickboxing, computer-hacking, wisecracking, and devious heroine will reveal the breadth of her skills, as she seeks to find the murderer without becoming a victim herself.

Long a staple of children’s books, dear to the hearts of legions of adult readers, Laura Ingalls Wilder’s nine Little House books often are taken as the truth about her own life as Laura, the little heroine of the prairie. But, like any story, the facts of the matter are far more complex, as Wilder scholar John E. Miller, also author of Becoming Laura Ingalls Wilder: The Woman Behind the Legend, demonstrates. Baby Rose, Laura’s daughter born in Wilder’s last novel, The First Four Years, grew up to become a noted author and editor in her own right, eventually having an indisputably large hand in the shaping and marketing of her mother’s work. Miller presents a fair and nuanced study of the two lives, describing persuasively how the factors in the subtitle worked to create the Little House phenomenon. As Wilder herself said, addressing the Detroit Book Fair in 1937, “All I have told is true, but it is not the whole truth.”

Sex is a thoroughly disturbing, even repelling read, as Herzog unveils the campaign of the Religious Right—not for the conversion of souls, but for conquering of the nation’s bedrooms. She asserts that the Christian Right has abandoned the simple directive of “no” for almost pornographic touting of the glories of sex—if, and only if—undertaken in a Christian, heterosexual context. Words like “titanic” and “explosive” describe this sort of union. The buildup to this beatific sexual explosion often is prefaced with the narrator’s titillating personal confessions of illicit sex. Like good pornographers, the good shepherd leads his lamb to the brink, then says, “No!” This type of sex is reached only with one’s wedded spouse. Herzog also describes the Right’s unsuccessful abstinence movement for teenagers, and its burgeoning abstinence forays into third world countries, pushing programs that are hampering the fight against AIDS by limiting condom availability to unwedded individuals.