After all the furor and heated words over the pregnancy of Thomas Beatie and his wife, Nancy, and the birth of their daughter, Susan, this past June 29, it is instructive to read Thomas’s memoir. Born female, Beatie had a difficult childhood, with a physically abusive father and an adored mother who killed herself when the child was 12. These deplorable facts were not determinants of his gender, but imbued him with the strength and resolve needed once he decided to claim his true gender. As a man, Beatie was able to marry Nancy legally, but she was unable to bear another child. Thomas had retained his female reproductive organs, so they decided he was to become pregnant. Eventually, Nancy herself performed the artificial insemination that produced Susan. An important point for readers to grasp is Thomas’s statement: “I am neither a woman nor a mother—I am both our child’s father and the person who gave birth to her.” 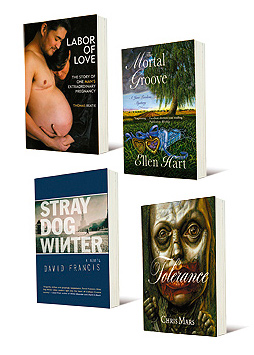 Ellen Hart’s The Mortal Groove paperback release coincides nicely with her new Lawless novel, Sweet Poison (Lavender, October 10). If you haven’t read either, grab them both, because the pair involve, along with ancillary murder, mayhem, and past sins, Ray Lawless, Jane’s Dad, a retired attorney being inveigled into running for Governor. That Hart can deliver up a plot more hair-raising than state politics is a measure of her skills. Some of Ray’s campaign workers, Vietnam vets, are linked together by the unsolved murder of a young woman dating back decades to 1971. As one of the trio begins to spin out of control, the danger escalates for Jane and Ray, as well as her brother, Peter (whose own fascinating subplot fuels a good deal of the book’s energy). The characters, as is Hart’s wont, are finely drawn and uncomfortably believable. Of course, Jane’s buddy and cohort in crime, the flamboyant Cordelia Thorn, is an enthusiastic presence right to the end.

A dark, chilly thriller to keep you in by a crackling fire under a cozy blanket while the wind howls. Francis gives you Moscow, February 1984, and makes you feel every dropping degree of it—every twist of paranoia. Young Darcy Bright, an artist, has been summoned by his half-sister, Fin, also an artist, commissioned to paint industrial landscapes, but actually for more sinister purposes. She has sent Darcy (something of a naïf) plane tickets and a leather money belt (was there a hidden compartment?). He arrives in Moscow, following a sordid assignation with a military man in a Prague railway loo. Bad move. Chapters intercut with flashbacks of Darcy and Fin’s childhood (that she was conceived by their father as Darcy’s mother delivered a stillborn sibling in a hospital hints at their complex relationship). Darcy finds Aurelio; acquires a whippet; and sinks deeper into the coils of Fin, her anarchist lover, and the KGB. Don’t ask how it ends….

Reminiscent of both the German Expressionist painter Otto Dix (1891-1969) and Hieronymous Bosch (c. 1450-1516), Chris Mars’s haunting and often-repellent works are nonetheless mesmerizing. To the question, “Am I my brother’s keeper?” Mars long ago answered, “Yes. I am.” From the beginning of his career, Mars (born 1961) has been motivated by his older brother, diagnosed with schizophrenia, and incarcerated at 16. Mars wrestles with issues of tolerance, acceptance, and exclusion, along with the beauty inherent and still surviving in the flawed. In these paintings, the Minneapolis-based artist shows how the inarticulate can be shorn of personhood—how the strong can pin a label on the voiceless, and use it against them. Many of his subjects are so tagged, i.e, “VM-5: The Poor Steward” (Pat Robinson), while his muted palette of browns and ochers is highlighted with startling reds and the opalescent white of freshly dug grubs. Tolerance is a powerful collection, filled with lessons to be digested and learned.