Working with people experiencing homelessness, longtime social worker Cathy Heying repeatedly saw how devastating the prohibitive cost of commercial car repair could be. As she describes, in a domino effect, people who couldn’t afford to get their cars fixed couldn’t get to work and lost their jobs. Without jobs, they lacked the money to pay for housing and ended up in shelter.

It was also evident to Heying that many people who could not afford the cost of commercial car repair felt that they equally could not afford to stop driving these dangerous vehicles. Too often they spent a bleak Minnesota winter living in cars without brakes or heat. That’s when she got the idea for The Lift Garage, an affordable, nonprofit auto repair service for Minnesotans of limited means. It’s a new idea that meets a pressing need. 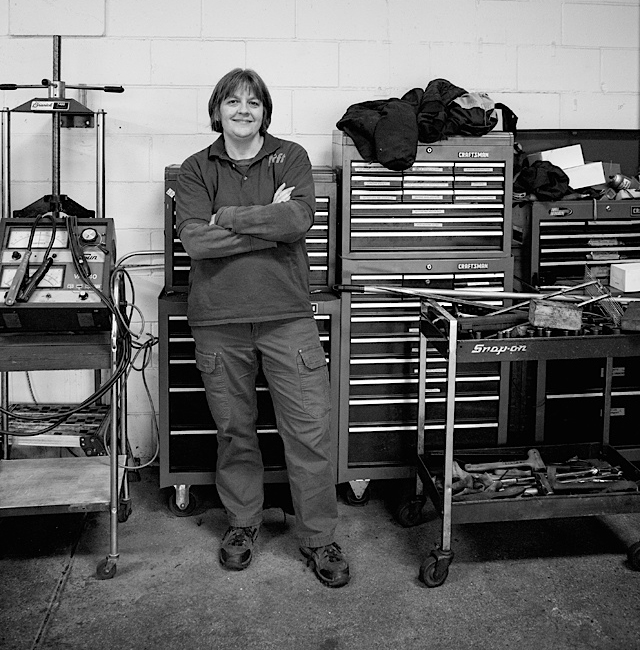 With a degree in social work from Loras College in Dubuque, Iowa and a master’s in pastoral ministry from St. Mary’s University in Winona, Minnesota, much of her adult life has been in social services and faith-based social justice work. During her stint with St. Stephen’s Human Services, Heying encountered countless people for whom broken down vehicles meant the difference between being housed and not housed.

“The church hosted a shelter for homeless men and at the time beds were given away via a lottery system. If someone didn’t get a bed they were forced to look elsewhere for shelter,” Heying remembers. “Often, I saw men who held onto beat up cars that ran intermittently. They not only used those cars to look for or get to work but they would use them as shelter when they didn’t get a bed. I was regularly moved when I’d go home at night and see four guys piled into one of those cars to sleep at night. People in poverty are among the most hospitable and generous folks I know.”

According to Heying, people would also often show up at the church asking for money to get their car fixed. She says, “It often was a story like this: ‘I am wondering if the church could pay for this $500 car repair? I live in Minneapolis but work second shift in Chaska and there is no bus that runs from there to here when I get off at 10:30 at night. If I don’t get the car fixed, I can’t get to work and then I’ll lose my job. If I lose my job I won’t be able to pay rent and my family will be evicted.’ We would help when we could but it was never enough. I kept thinking that perhaps we needed low cost car repair. But I wasn’t sure how that would happen or that it should be me.”

Heying admits, she knew very little about cars, was completely satisfied with her life and job, was still paying off graduate school student loans, and had zero interest in going back to school. But, the idea just wouldn’t leave her alone and she looked into Dunwoody College of Technology, enrolling in the fall of 2008 and graduating in 2010 with a degree in auto technology.

“It was a really hard two years,” she reflects. “I was in over my head and cried many days. But with the help of some amazing instructors and other supports in my life, I got through. I didn’t necessarily have the vision of what is now The Lift Garage in my head when I went to school. I thought perhaps it would be me fixing cars in my driveway so I thought I should have some skills.”

But doors kept opening and in 2013 The Lift Garage opened one day a week, subletting one bay. Now, serving as the executive and operations director, Heying’s nonprofit is open four or five days a week, nine hours a day with three bays.

Heying admits there was a momentous learning curve, not only in learning the language of the automotive world, but learning business, financials, and nonprofit governance. “There was a need to raise money so we could apply for nonprofit status,” she remembers. “We needed to get donors to believe in us when this was nothing but a vision. It’s amazing to look back on it now and see how far we’ve come and how much I personally have grown and learned through this.” 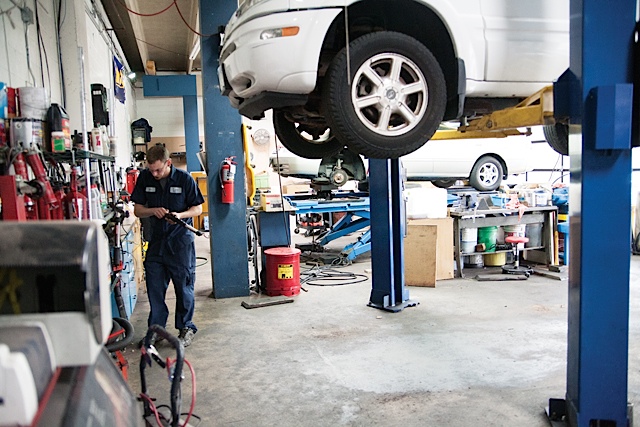 In addition to Heying, a front office staffer has a degree in sociology and she says all of Lift Garage’s technicians have personal experience that allow them to understand the challenges their customers face. “They’ve all struggled with poverty, a couple with homelessness,” she says. “While it is not our primary mission to hire people with barriers to employment we are certainly proud to give an opportunity to someone who might not find it elsewhere.”

And their customers reap the benefits of their commitment to helping those who need it. The Lift Garage charges $15 per hour for labor plus parts at cost. To compare, Heying says a traditional shop charges around $100 per hour for labor and often a 50–70 percent mark up on parts. To date, The Lift Garage has served over 660 customers, completed 1,300 repairs, and saved low-income Minnesotans about a half a million dollars in car repair costs.

“Providing quality discounted car repair is the primary way we live our mission but we also provide free pre-purchase inspections to people who qualify for our services,” Heying adds. “We really want to support people in purchasing the best car they can for their limited money. They do not have to wait on the waiting list for this service and we don’t charge anything.”

Appointments for The Lift Garage’s service and well-known hospitality (they provide toys and books for waiting children, and, if they haven’t eaten, provide snacks) can be as far as two or three months out, something that Heying says isn’t surprising.

“Given how dependent we all are on our vehicles, it only makes sense that low income folks are, too, if not more so,” she says. “For many of us, we are lucky enough to have a second vehicle in our household, have money to take an Uber, or friends that can help us out. But for people living in poverty, the broken down car is often the only one they have and so it needs to get fixed. This is compounded by the fact that many of our customers work low wage service industry jobs, the kind where they don’t get vacation or sick time and don’t have a lot of flexibility. This means that they are even more likely than other folks to lose their job if they can’t get there because of a broken down car.”

“The three-month wait is a huge challenge for us,” she continues. “When we were open one day a week we had a three-month waiting list and now, three years later, we are open five days a week with three full-time techs and three bays and we still have a three-month waiting list. Clearly the need is huge and significant expansion hasn’t changed the wait time so we’re a little unsure how to move forward with getting that list down. We’re adding another bay and another full-time tech in the next couple of months which will allow us to add about 30–40 appointments a month so we’ll see if that makes a dent in anything.” 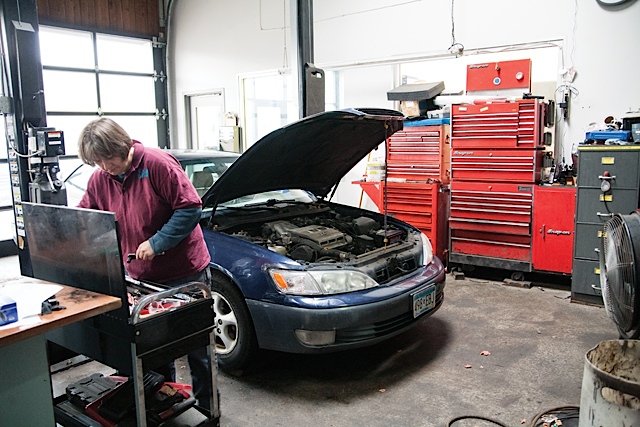 It’s not just keeping up with demand that provides Heying and her staff a challenge. Usually they are working on old cars with deferred maintenance, which translates to regularly encountering extremely rusted or broken parts and parts that can be hard to find. “This detracts from our efficiency and makes it harder to meet the demand,” she says. “And although this continues to improve, we don’t have state-of-the-art diagnostic equipment which means we can’t always diagnose problems or we have to figure out an alternative (often slower) way to diagnose.”

The Lift Garage’s clients’ income must be at 150 percent of the federal poverty guideline or below. That translates to $18,200 per year for a household of one, $30,000 for a household of three. There are no geographic limitations on who they serve, but Heying says they must be able to get the vehicle to the garage as they don’t have a tow truck.

“They must have a car we work on (no German cars, no Cadillacs) and a repair service that we do,” Heying adds. “The income restrictions are a bit of a challenge in that we know that if someone has a household of three and is making $32,000 per year they can’t magically afford full-rate car repair. We just had to draw the line somewhere and even with where we drew the line we still can’t keep up with demand. So if we drew the line at a place that would include more people, we’d never meet the need.”

The Lift Garage relies heavily on donations to allow for car repair services at such a discounted rate. About 60 percent of donations come from individuals (the other 40 percent comes from churches, grants, small foundations, and the like). More than just financial, The Lift Garage accepts in-kind donations of unopened automotive fluids (oil, brake fluid, etc.) and Heying loves volunteers, both on the shop side and front office side, in addition to volunteers to serve on committees (personnel, fundraising, finance, governance, etc).

“It costs us the same as any other shop to run ours,” Heying says. “We have insurance, staff, rent and utilities, shop supplies, etc. We need to cover those costs with the support of the community. We are so grateful for any and all levels of support; we have some donors who give thousands but we also have a nun who gives us $5 a month!”

“We don’t want to be another place that runs people through the door, we want people to stay as long as they need and always feel like we have the time they need to feel good about their car repair,” Heying adds. “I always say that we are grief counselors, financial counselors, resource specialists, social workers, and then we fix cars on the side. We spend a lot of extra time with people helping them understand their options, offering advice, easing their anxiety. Just this week I watched one of the technicians come to talk with a customer and end up sitting with her for about 30 minutes answering her questions. While this doesn’t help us get cars out the door any faster, it does honor our commitment to giving everyone the best service we can with dignity and hospitality.”

For more information or to make a donation, visit www.theliftgarage.org.