Sticks and Stones: The Safe and Supportive Schools Act 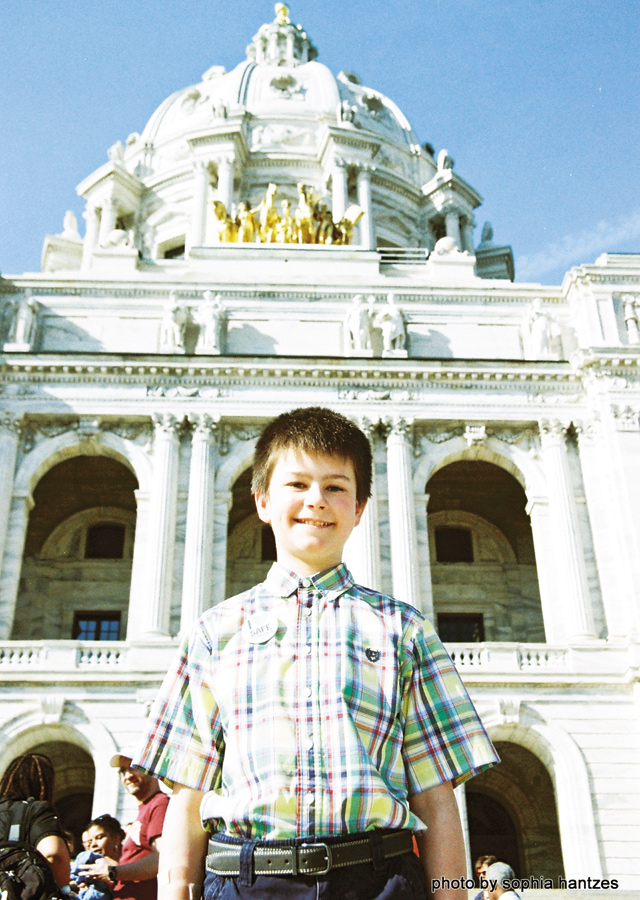 Jake Ross, 11, of Forest Lake, has been a young champion for this legislation. Photo by Sophia Hantzes

Over the past year, Lavender has reported on the fight to pass legislation against bullying in schools. Writers urged anyone that would listen to get involved with the Safe Schools for All Coalition (a group of more than 90 education, disability, youth, religious, GLBT and social service organizations, as well as individual citizens). The argument was made loud and clear that, yes, marriage equality passed, but there are so many other battles to be won.

Bullying is one of those battles.

You see, sticks and stones may break my bones. Names can really hurt me.

April 9, 2014 saw the passing of a bill aimed at toughening Minnesota’s anti-bullying law by the Minnesota House with a vote of 69-63 and Governor Dayton promised to sign it into law later that day. Having already cleared the Senate by a vote of 36-31, the new law – the Safe and Supportive Schools Act – defines bullying, in part, as behavior that causes physical harm or fear of physical harm and “constitutes intentional infliction of emotional distress.”

The new law, if followed correctly, would require school districts to track and investigate cases of bullying and require schools to better train staff and teachers on how to prevent it. In addition, it directs public and charter schools to adopt local policies to prevent and prohibit school bullying. School districts will also have the option to adopt anti-bullying policy language drafted by the state. The previous 37-word law required school districts to have a bullying policy but omits details on what the policy should contain.

The recently passed act also clearly defines what behaviors should be considered bullying in Minnesota schools, including online forms of bullying through social media. A May 2013 Pew study found that 98% of teens use Facebook, and the legislators acknowledge that students are increasingly communicating online by including cyberbullying in the new law.

This act has been years in the making, with the Dayton Administration and members of the Minnesota Legislature working since 2011 to assess the threats and challenges posed by school bullying. Following the investigative research period, they worked to develop legislation to strengthen bullying protections for Minnesota children. The Safe and Supportive Schools Act includes the recommendations of the Governor’s Task Force on the Prevention of School Bullying—a group of Minnesota parents, community members, health care professionals, education experts, school administrators, and policymakers convened by Dayton in 2011 to develop legislative solutions to prevent bullying in Minnesota schools.

However, the passage of the new law has also raised some concerns. The inclusion of cyberbullying has been seen by some as policing off-campus activity, a policy which some have argued is too far-reaching on the part of school officials.

In addition, whether Minnesota schools live up to the act’s name will be driven largely by the standards and guidelines put forth by the state’s Department of Education, how districts apply them, and who is ultimately held accountable through this approach.

Legislators who opposed the measure argued that it would do little to reduce bullying, would remove local control from school districts, and would be too expensive to implement. Certainly the availability of resources is a real concern as school districts begin looking at how to implement the new law. However, the Safe and Supportive Schools Act greatly improves upon the previous law and sets the stage for districts to prove their commitment to creating a safer environment for Minnesota’s children.