Skirting The Issues: The Fate of the Republic 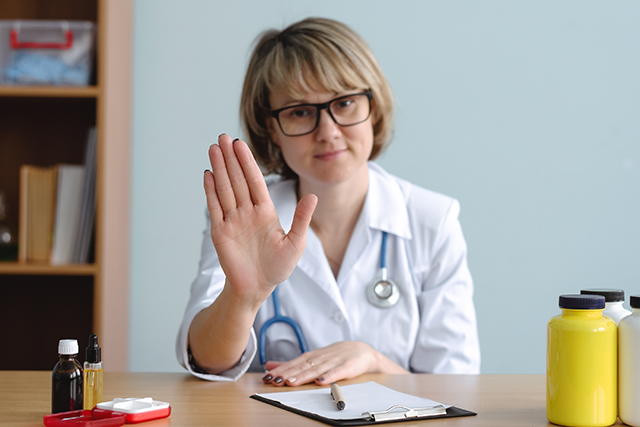 Woman a doctor is showing a stop gesture by her hand. No panic. Do not worry concept. Denial in medical examination.

On my 2020 calendar is a date: November 3. It’s been circled since way back in mid-2019, when the calendar had nothing but blank spaces. It’s a day for me, a transgender woman, and for the trans community at large, that will determine whether we’re erased from society’s view entirely.

I know, that sounds awfully end-of-worldly to some reading this. Here she goes again…

As if I really needed a reminder about the importance of our next presidential election, the nudge came in the form of a newsflash about the U.S. Department of Health and Human Services removing healthcare protections for transgender people. I saw the news late on the afternoon of June 12; I was alone and fatigued from a week of Zoom meetings.

As I read that doctors, nurses, therapists, and anyone else associated with healthcare is now free to discriminate against trans people, and that health insurers might be free to exclude us from coverage too, I was immediately thrown into despondency. That’s truly the only word for it: Despondent.

It was so bad that I did something that I never do—I reached out to someone for support. Thank god my dear friend Vanessa, another transwoman, picked up. It was that urgent. She talked me off a ledge, literally.

For sure, I’ve experienced my share of healthcare marginalization—after thirty years of continuous healthcare coverage while I presented as a male, my health insurer dropped me in 2010 simply because I came out as trans. Then there was the nurse who lessened me (“Is Ellen really your legal name?”), multiple providers who have misgendered me as if it was nothing, and additionally, as I wrote about two years ago, I encountered a Twin Cities gastroenterology practice that saw fit to label me as “male” even as I wore a delightful sundress and presented a driver’s license with an “F” on it.

Heck, even my current internist (whom I love for her grace and compassion) has a record-keeping system that just can’t get past the awful-but-nonetheless-true fact that I was born with male genes. Still, I know my experience is absolutely nothing compared to what many trans people have endured where providers just simply refuse to let them in the door. Or, if they make it that far, who ostracize trans people to their faces, feeding into self-hatred and despair.

All of this is made more urgent because of my age. In a year and a half, I’ll be on Medicare. In other words, the chief oppressor of transgender humans will be in total control of whether I get healthcare or not. If the 2020 election goes the wrong way, who knows what restrictions might be imposed on transgender Medicare recipients?

Even worse, as I’m learning, since Medicare only covers about 70 percent of healthcare costs, there’s the necessity of having supplemental insurance. What if those supplemental insurers decide that simply being trans constitutes a “preexisting condition,” thus barring trans folks from purchasing coverage? If the HHS and those who support marginalizing trans people have their way, I think this is a very real risk. Then what? If I think about “then what?” too much, my head will explode.

Three days after my despondency over the HHS announcement set in, the U.S. Supreme Court decided the Bostock case, holding that “sex” under Title VII of the Civil Rights Act of 1964 included gender and sexual identities. No longer can LGBTQ people be fired for being out at work. The victory did much to lift the cloud of emotional misery that had enveloped me.

But it didn’t allay my fears entirely.

I am well aware of how humans become fatigued at some point, after enduring barrage upon barrage of emotion-sapping words, we retreat to self-preservation, forsaking any hint of idealism—which lends to someone, some horrible thing, taking control. Simply put, we surrender. It happened in Nazi Germany. It happened in Rwanda. It happened in Bosnia. And, it’s happening in America right now, in real time.

Why would we think Americans are any different from other humans? All of which gets us back to November 3, 2020. The polls have my presidential candidate up by double digits. James Carville, the great political pundit, recently declared that the current White House occupant doesn’t have a chance at reelection. My people are feeling good.

While I’d like to be optimistic, I’m anything but. We can’t have voters sitting at home thinking this sucker is won. Just 70,000 sat home last time around, which put America squarely where it is now. In short: circle November 3 and vote. Mail it in or go in person. Tell everyone you know that they too, must vote. Then ensure that they do.

The fate of the Republic depends on it.