I’ve written before of how the Twin Cities is a GLBT “bubble” where the sight of two mommies or two daddies pushing a baby stroller along the Stone Arch Bridge produces strangers’ smiles and cooing remarks. For many in the metro, another person’s queerness makes no difference.

Thus, it’s so easy to forget that much of America isn’t like the Twin Cities; a majority of states lack GLBT protections, meaning that Supreme Court-sanctioned same-sex marriage doesn’t trump (what a word) a landlord’s ability to refuse renting to gay newlyweds.

It was against this backdrop that, in early August, I drove across a good chunk of the Midwest to speak about “Gray Area ThinkingTM,” a toolset I’ve devised for how to welcome people who are “different” from “us.” While my ultimate destination was central Wyoming for a family reunion, I wanted to make the 1100-mile road trip into something meaningful by publicly speaking in states where I, a bisexual transgender person, have no legal rights. Hence, as I made my way west, I stopped to talk at the GLBT center in Sioux Falls and the Rapid City Public Library, experiences I’ve written about in my blog at www.elliekrug.com. 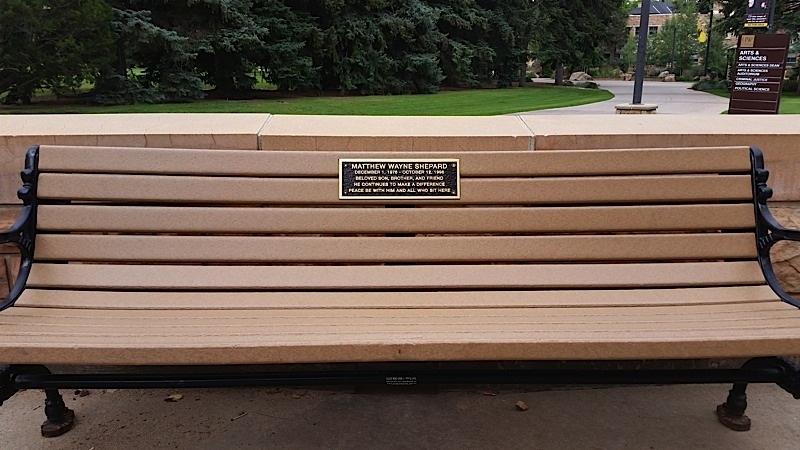 My last stop was Laramie, home to the University of Wyoming, and a town with a non-student population of 30,000.

For anyone who’s GLBT, “Laramie” should automatically equate to “Matthew Shepard” and The Laramie Project.

As a reminder, in October 1998 Matthew was an “out” 21-year-old University of Wyoming student who met two men posing as gay at a bar in downtown Laramie. Matthew left the bar with the men; as soon as they got into a pickup truck, one of the men produced a gun and pistol-whipped Matthew. The men then took Matthew to a rural area just outside of town and beat him mercilessly, after which they tied him to a fence and drove away. Eighteen hours later, a cyclist discovered Matthew, barely alive with a fractured skull. Matthew lingered in a coma for six days until he died.

Matthew’s killers were later convicted and each is now serving a life prison sentence.

As I drove into Laramie, I wondered what effect Matthew’s death, and the international outrage and notoriety it produced, had on the town. Would Laramie have owned up to internal homophobia and become a welcoming bubble?

I learned that in some ways, yes, but in other ways definitely no.

On the positive side, Laramie has the only GLBT-protective city ordinance in Wyoming, although it wasn’t adopted until May 2015, nearly 17 years after Matthew’s murder.

Additionally, the University has the Rainbow Resource Center, a GLBT safe zone. Moreover, while the city lacks a gay bar, beginning in early 2016, a downtown (straight) bar began hosting a biweekly “GLBT Night” during the months the University is in session. A promo states, “(t)hese nights will provide a much-needed environment for folks to be themselves, without fear of judgment or social consequences.” 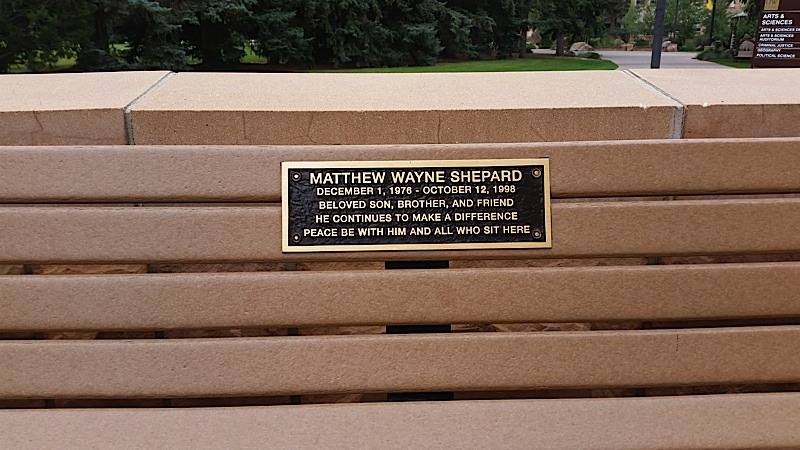 As for my personal experience, I found the Laramie public library extremely open to the idea of me speaking and it even promoted the event with a flyer that library staff created. Although my talk was attended by just five people, I was reassured that more persons would have attended had it not been the University’s summer break.

Still, the most significant takeaway about Laramie was how it has handled the memory of Matthew Shepard.

On the day following my talk, I Googled “Matthew Shepard Memorial” only to find that there is no memorial per se. Rather, Google pointed to a commemorative plaque on a bench located on the University campus. A related article reported that town officials had renamed the road on which Matthew had been beaten so that it would be more difficult for outsiders to find.

As I later walked the University campus and spotted not one, but dozens of benches that all looked alike, I asked a group of groundskeepers, “Where can I find Matthew Shepard’s bench?”

Two of the men I addressed had no idea of what I was talking about. A third man pointed across the quad toward a sciences building.

I found Matthew’s bench and was overcome with great sadness. A human had died so early in his life just for living authentically and, for that, his community could offer nothing more than a nondescript bench with a plaque.

After clicking a couple pictures, I stood quietly and tried to imagine the horror that Matthew experienced nearly two decades ago. Beaten, bleeding, and left for dead, did Matthew struggle to look up at a starry October night’s sky and ask, “Why?”

I then wondered how things might be different if more people in Laramie (and other non-GLBT bubbles) let themselves imagine Matthew in the same way.

Ellen (Ellie) Krug is the author of Getting to Ellen: A Memoir about Love, Honesty and Gender Change (2013). She frequently speaks and trains on diversity and inclusion topics; visit her website at www.elliekrug.com where you can sign up for her newsletter. She welcomes your comments at [email protected].