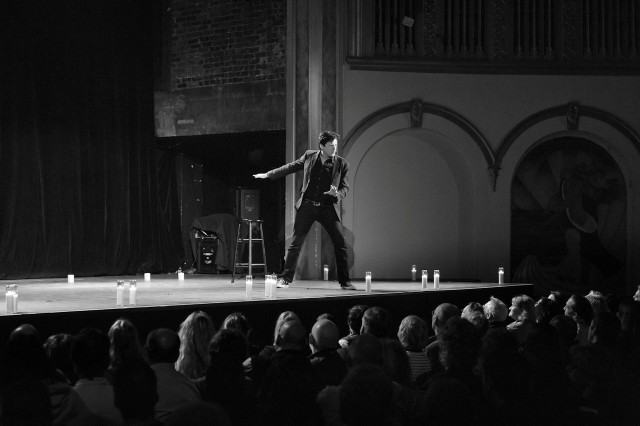 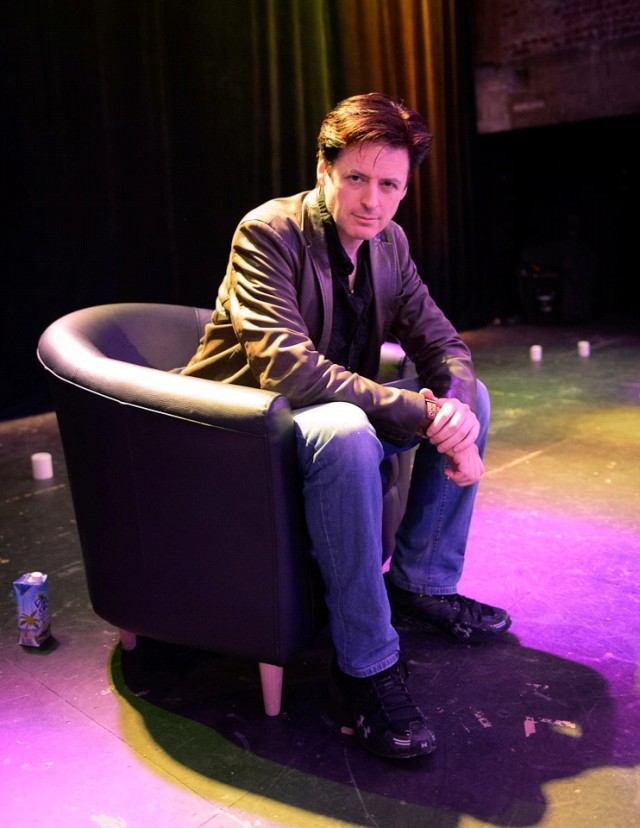 An answer to this prayer?  The Sexy Liberal Comedy Tour.

Do you need a safe space where you can gather with people who will laugh in the face of preposterous political stories and opinions?  Do you want to crack a smile and guffaw while throwing political-correctness out the window for simple, brazen opinion?  Even better, do you want to sit self-righteously in the knowledge that what you’re hearing is morally defensible, historically accurate, and intelligently constructed?  Yes?  We hear a bit too much about “reparative therapy” here in our fine state, so make sure you come out for some group therapy tomorrow night brought to you by laughter, the best medicine.  Homophobes will be called homophobes.  You’ll come out of this comedy show better able to argue in a political or religious debate than when you went in.*  Do yourself and your cause a favor and come hang out with the Sexy Liberals.

I had the opportunity to talk to John Fugelsang, one of the sexy outspoken members of the tour, yesterday morning.  John is known not only for his acting and comedy, but also his sharp commentaries regarding religion and politics.  Lavender will run a longer feature about John, his parents (a former nun and former Franciscan brother), and his thoughts on all-things-sociopolitical at a later date, but here are some serious snippets to woo you into joining the Sexy Liberals for some of your own reparative therapy…the kind that will hopefully undo some of the stress caused by the fight at the fore.  Imagine comedy…fueled by these philosophies.

Andy: The Sexy Liberal Comedy Tour has been touring the country for a year–how has it been received?

John: The audiences have been wonderful.  I really wanted to do this tour because I really believed there was an audience for it.  A progressive political comedy tour.  There are so many people in America who identify as progressive or liberal or Democrat or SANE or ANTI-EVIL and these folks are afraid to put an OBAMA bumper sticker on their cars when they go to their jobs or their church.  And Obama’s not even all that liberal in the big picture. We really wanted to bring this as a way of telling people ‘You’re not alone’ and in the most entertaining way possible.  What I really love about Stephanie is that I think she’s  a real radio innovator.  She’s the first person to take that zany, wacky morning zoo format and do something smart, moral, and political with it. We wanted to try to get that on the stage.  We wanted it to be the smartest, the funniest–the most morally defensible comedy show you’ll ever see.  There are lots of dirty jokes but they’re for a pristine cause.

Andy: I saw on The Sexy Liberal Comedy Tour’s Facebook page that you’re going to be bringing a big GAY Super-Sexy Liberal Party to us Saturday night.

John: Oh, yeah?  I didn’t see that, but it is certainly in the news this week and very relevant.  I was going to be talking about a bunch of other political issues but suddenly gay marriage is back on the front burner and I’m really excited about it.  There are few things I like talking about more than homophobia in a Christian context.  With my background especially, I get pretty angry when people try to use Christianity as a cover for bigotry.  I don’t know if you know about my parents, but the backbone of what I do is take what the Bible says versus what Jesus’s unauthorized fan clubs claim to believe.

Andy: North Carolina made the news this week with Amendment One.  Minnesota has its own anti-marriage amendment on the ballot this fall and we’re very serious about it.  Will the Sexy Liberal Comedy Tour hit the issue from a more fun perspective?  Be a little group therapy by way of humor?

John Fugelsang: Yes. From a fun perspective, but also from a moral and intellectual and Biblically correct perspective. Billy Wilder said that if you’re going to tell people the truth, make it funny or they’ll kill you…and that has been my guiding principle behind doing any kind of political stand-up and with the Stephanie Miller Show.  The good news for people who aren’t homophobes or haters is that when it comes to the issue of marriage equality, the Constitution, morality, Jesus, and intelligence, history are on our side.

Andy: About opening our minds, the topic of nature v. nurture has been coming up lately.  Do you have anything to say on the topic?

John: I sure do, yeah. First off, in the big picture, nature v. nurture doesn’t matter if you’re serious about words like liberty and freedom for our society.  Whether you’re born that way or not born that way, if you believe in liberty and freedom, it’s irrelevant.  You can’t claim to care about liberty and freedom and then deny happiness and equality to taxpaying gay American citizens.  Now, my mom is a 78-year old former nun.  She said to me the other night after the announcement, “Who would choose to be gay in this culture? Who would sign up for a life of being scorned by their peers and […] being despised by your own culture?  Who would sign up for that?”  And that was what a 78-year old ex-nun who was born in the segregated south said to me the other night.  I couldn’t phrase it any better than that.  We’ve all known gay children.  We all have.  And, you know, I don’t believe that “gay” and “straight” are fixed identities. I believe in the Kinsey Scale and that you can be more one than the other. Quite frankly, I’ve known gay men who occasionally have been with women and I’ve known lesbians who enjoy the occasional hook-up with a man and GOD BLESS THEM. Lesbians who enjoy the occasional romp with a man have helped me go on living.  I believe in sexual fluidity.  I don’t get hung-up on this black-and-white mentality.  I believe in self-identification and that people get to decide what they are.  We have the freedom, this is what liberty is about.

Andy:  Where do you think this whole GLBT rights movement is going?

John:  When I was a teenager, I moved to Greenwich Village.  I still live there.  It was in the ’80s right when ACT UP was beginning to flourish.  I live right across from Stonewall in Sheridan Square.  To this day, I am astonished by how much progress we have seen in 25 years.  No other minority group has achieved so much equality in such a short period of time as the LGBT population. It makes me believe in America, it makes me believe in the human race.  The great irony of all of this is that it might never have happened were it not for a plague. AIDS and the devastating indifference to AIDS by the Reagan and Bush Administrations made the LGBT people mobilize and get together and get active in a way they probably never would have without it.

You know, irony is the one religion that will never let you down.  I think that we can look at this and say that beauty can come from the most horrible of tragedies and I think that the progress that LGBT citizens have made in the past 25 years is a direct credit to the human spirit.  That a devastating plague and societal indifference to it led to the greatest, most rapid advancement of civil rights for any minority group in human history. And I give credit to all the heterosexual folks who helped it all happen, too.

Andy: Speaking of administrations, what do you think of our right-wing Minnesotans?  Any words of support you can offer us?

John: It is the cruelest bitter irony ever that the state that gave us Bob Dylan also gave us Michele Bachmann, isn’t it? You know, look.  You can’t stop progress.  The status quo is always more organized–that’s why they’re the status quo, because evolution takes a long time and social progress takes a long time.  Michele Bachmann and Tim Pawlenty will live long enough to be ashamed of where they stood on marriage equality in the eyes of their own grandchildren.

Andy: Do you think it’ll just happen one day that we’ll wake up and everything will have changed for the better?

John:  No, it’s gradual. Our grandchildren will be shocked that gays were despised in our culture just as I’m shocked when my mother tells me about the segregated South that she grew up in. It’s a sign that we’re improving as a species. It’s generational.

Andy:  I was reading the other day about how tired we are of culture wars–how they’ve just got to stop.  We’re tired.  We’re done with them.

John: It’s never going to happen. It’s human nature to be fearful.  All this liberal/conservative crap, it’s really just a struggle between love and fear.  Are we going to to open our hearts and open our minds and grow and evolve or are we going to hide in our caves with our rocks and keep everyone else out?  Loving involves risk. Anytime you choose to love a person or a child or a group or a cause, you’re gonna get your heart broken. You’re gonna get disappointed. You’re gonna look silly because you chose to love. And it’s still the right way to conduct yourself.

Indeed.  Many thanks to John Fugelsang for taking time out of his busy day in Madison yesterday to talk to me about the show tonight at the State Theatre here in Minneapolis.  This was a generally serious conversation, but now you know what will be fueling the funny tonight.

The Stephanie Miller Show can be heard on AM950 from 8-11 weekday mornings.

*In the spirit of objectivity, please be sure to inform us when the Sexy Conservatives come to town to talk about Marriage Equality and fighting homophobia and we will promote the hell out of that event.  We’re serious.  Take us up on it.