One of the largest LGBTQ choruses in North America is changing—and saving—lives.

The cancellation of in-person rehearsals and concerts hasn’t stopped Minnesota’s only lesbian, gay, bisexual, transgender, and straight allies (LGBTA) chorus from continuing to inspire social change. For One Voice Mixed Chorus, they’re on the forefront of innovation.

Founded in 1988, One Voice Mixed Chorus boasts 125 singing members, ranging in age from 15 to 81. They also have 50 volunteers who serve in their “fifth section.”

During its history, One Voice has partnered with 20 local nonprofit organizations, commissioned more than 30 new choral pieces, performed with over 50 middle and high schools, and brought their mission and music to greater Minnesota for more than 15 years.

“One Voice has always been about more than producing amazing concerts,” Executive Director Mitch Fantin tells Lavender. “At its heart, our work is about bringing people together and inspiring social change. That is just as true today as it was over 32 years ago when our founders demanded that, during a pivotal period of the HIV/AIDS crisis in the United States, LGBTQ people needed a space to belong and the dignity of being heard. Since then, One Voice has grown into one of the largest LGBTA choruses in the country—changing and saving many lives in the process.”

That’s the case for Sam Bullington. “My life before One Voice and my life after One Voice were completely different,” they tell Lavender. Bullington was a member of One Voice from 2003 to 2007. “My experience with One Voice was one of the defining moments of my life.”

Bullington was introduced to the organization after the choir participated in the Transgender Voices Festival. “That experience really changed my life, so the next season I auditioned for One Voice,” Bullington recalls. “My first ever audition, which was, at the time, the most courageous thing I’d ever done, because voice issues have been a lifelong area of vulnerability and challenge for me,” they said. 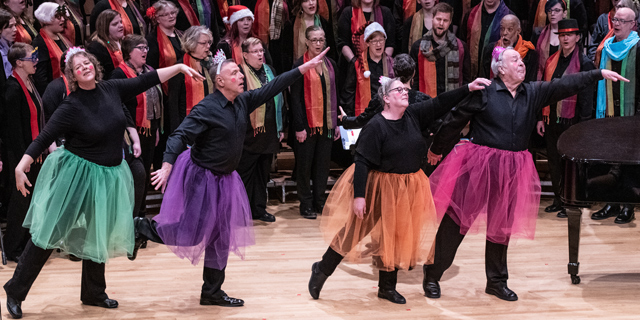 For 20 years, One Voice’s OUT in Our Schools program has engaged students in Saint Paul schools in conversation about gender and gender stereotypes. Photo courtesy of One Voice Mixed Chorus

As a member, Bullington drove eight hours one way from Missouri every week to attend One Voice rehearsals. Despite Bullington now living in Denver, they remain engaged with the community, having recently participated in a workshop held by the organization. The experience with One Voice inspired Bullington to start Phoenix, a Trans Community Choir in Colorado, in 2015.

Sharing their message with the next generation

For 20 years, One Voice’s OUT in Our Schools program has engaged students in Saint Paul schools in conversation about gender and gender stereotypes. Their spring 2020 curriculum featured Bayard Rustin, an openly gay African-American civil rights activist who was a mentor to the Rev. Dr. Martin Luther King, Jr.

Students participate in workshops and then collaborate with One Voice singers to sing on stage together. One student said about the experience, “At first I felt uncomfortable about singing with gay people, but over time my attitude and maturity developed and we had a great time. Everyone ended up being way cool and extremely nice!”

“One Voice is so much more than a chorus,” Fantin says. “Whether we are touring through areas that LGBTQ choirs rarely go, performing collaborative concerts with young people in their schools to dispel stereotypes and bridge differences in the process, or bringing untold and under-told stories to the stage, our mission is the same—building community and creating social change by raising our voices in song.”

Bullington remembers their first-ever tour with One Voice. “We went to northern Minnesota just after George W. Bush was re-elected,” Bullington says. “We sang at a school, which was so incredibly moving to me. I thought about how my life would have been different if a queer choir had come to my school when I was growing up. People came from hours away to hear us because they were so starved for queer community and felt so isolated in such a conservative political climate. That was very, very emotional.”

Let the circle be unbroken

It’s impossible to assemble a choir in-person during the COVID-19 pandemic. And the future of what choir rehearsals will look like remains unknown. “The pandemic has upended pretty much everything for us,” Fantin says. “Staff work remotely, in-person rehearsals and concerts are postponed, revenue from ticket sales is gone. The challenges are immense, especially for choruses. There are not many good options to replicate the experience of live singing for an audience and especially for the singers.”

“Although in-person rehearsals and our summer concerts have been postponed, our creativity is thriving,” Fantin adds. One Voice has co-sponsored weekly statewide sing-alongs with Minnesota Public Radio. The idea for “Bring the Sing Home” came from One Voice Artistic Director Jane Ramseyer Miller. Every Friday at 5:55 p.m. since mid-April, MPR News, Classical MPR, and The Current have simulcast a song, encouraging people to sing together. Previous songs include “You’ve Got a Friend” by Carole King, “We Are Family” by Sister Sledge, and “I Will Survive” by Gloria Gaynor.

“We had a blockbuster summer planned,” Fantin says. “Our concert, ‘ReMembering: Singing Water’ has been postponed a full year. That project explores Minnesota’s history as a place of homecoming for immigrants, as well as a place of exile and displacement for the Dakota and Ojibwe nations, paralleled with similar themes of refuge and exile for LGBTQ people in Minnesota. The concert weaves songs and stories with life-sized puppets, telling true stories of Minnesota through themes of water.”

One Voice was also scheduled to take part in the GALA Festival in July. It combines hundreds of LGBTQ choruses from around the world every four years, and the 2020 convention was set to take place in Minneapolis. It is rescheduled for July 2021.

“We have to be innovative,” Fantin says. “As long as it is unsafe for large groups to sing together, something needs to take its place—something big, something meaningful. Our organization is deep in conversation about how we can be leaders in this new space. It will require a lot of creativity.”

“One Voice was a true family for me during those years and beyond,” former member Bullington says. “I formed deep, deep bonds with its members. I met my soulmate through One Voice and we had our joining ceremony reception at the home of two other One Voice members,” they tell Lavender.

Mike Marcotte, a Lavender contributor, is a nonprofit events planner. You can read more of Mike’s work at www.givemethemike.com. If you know of a nonprofit Lavender should feature in our Serve our Society series, email Mike at [email protected].