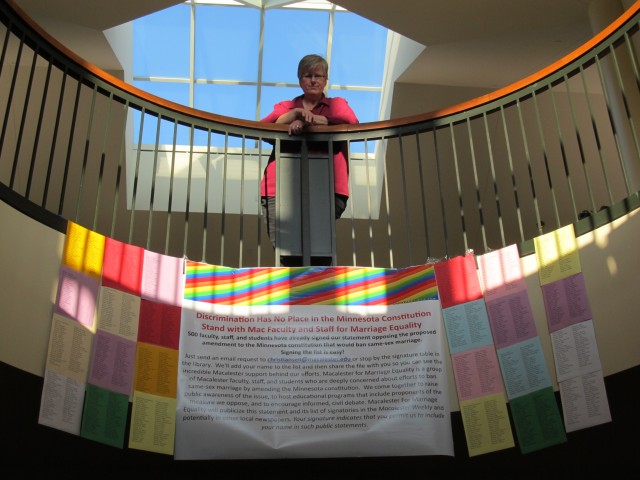 This spring, two Macalester alums asked me whether Macalester faculty and staff were going to do anything to speak out against the proposed Minnesota constitutional amendment that will ban same-sex marriage. Mmmmm? Good question.
The alums’ question troubled me because I genuinely did not want to do anything about the upcoming ballot initiative. I lead a busy life, and most mornings I wake up thinking about ways to improve teaching and learning at Macalester rather than ways to establish the legality of same-sex marriage in our state.
I definitely did not want to coordinate any such efforts on campus. Why not? Because I feared I would be seen as a hypocrite. After all, I am not married to my Beloved – a woman with whom I have been happily partnered for 11 years.
Even worse, my “rainbow credentials” seemed tarnished and dusty. I cannot remember the last time I attended the Minnesota Gay Pride Parade. My car no longer sports a rainbow flag, and I dislike the word “heteronormativity” almost as much as the concept to which it refers. In short, I am no one’s idea of a gay rights activist.

Nevertheless, I could not bear to say to those alums, “No, Macalester faculty probably won’t do anything to speak out. We are very busy and are thus likely to remain silent as a group in the face of that odious amendment.” So, I dodged their question. “I’ll get back to you on this,” I said.

My attitude changed once I started reading about the ballot initiative and the proposed constitutional amendment. Where I had previously been lukewarm to same-sex marriage, the idea of blatantly discriminating against same-sex couples, and enshrining that discrimination in the Minnesota constitution, got me fired me up. I began organizing my colleagues, and we got busy.
The gay and lesbian faculty who came together dubbed ourselves “Macalester for Marriage Equality.” We plan to host a series of programs in the fall term that will bring together the proponents and opponents of the constitutional amendment. We intend to sponsor civil dialogue and debate, and we hope to collaborate with student organizations in these efforts. We expect to coordinate get-out-the-vote activities in preparation for the Nov. 6, 2012 election.
We also wanted to make public our deep concerns about the amendment and why we oppose it. After working through many drafts and revisions, we wrote a formal statement of our views and this week began asking folks on campus to sign it. We hope that you, too, will read the statement, research the issue on your own if you have not already done so, and then join us by signing the statement if you share our perspective. You can find the full text and directions on how to e-sign the statement at http://bit.ly/mnmarriagerights
I may be a reluctant same-sex marriage activist, but I hope I have made those two alums proud of their alma mater. Busy as we are, Macalester faculty and staff won’t take discrimination against gay and lesbian Minnesotans sitting down. I urge you to examine your conscience and, if you can, stand with us for marriage equality.
Why We Oppose the Proposed Constitutional Amendment
1. The proposed constitutional amendment solely limits the rights of same-sex couples. Discrimination in civil rights on the basis of sexual orientation or gender identity is wrong. We believe such limitations on civil rights should not be enshrined in our state constitution.

2. The proposed constitutional amendment conflicts with Macalester’s community standards as exemplified by the Equal Employment Statement and Affirmative Action Policy Statement (Section 3.1 Employees’ Handbook). These policies forbid any Macalester employee from discriminating against other Macalester employees or students on the basis of “marital status” or “sexual orientation.”

3. Our opposition to the proposed constitutional amendment comports with Macalester College’s historic commitment to social justice and its efforts to create learning and working environments that do not infringe upon human rights.

4. Passage of the proposed constitutional amendment could substantially impair Macalester’s ability to recruit and retain the best-qualified students, staff, faculty and administrators. Those who weigh a choice to attend Macalester or accept its offers of employment may well consider its location in Minnesota negatively.

5. We believe the arguments on both sides of the same-sex marriage debate ought to be weighed in judicial proceedings where legal precedent and constitutional standards can be considered, but the proposed constitutional amendment would limit such considerations. According to those individuals promoting the ballot initiative, they pursue a constitutional amendment in order to preempt civil rights-based legal challenges to current Minnesota law (such as the 1997 Minnesota “Defense of Marriage Act.”) In contrast, we believe that the advocates of same-sex marriage ought to be able to make future legal arguments grounded in the equal protection and freedom of conscience clauses of the Minnesota constitution.