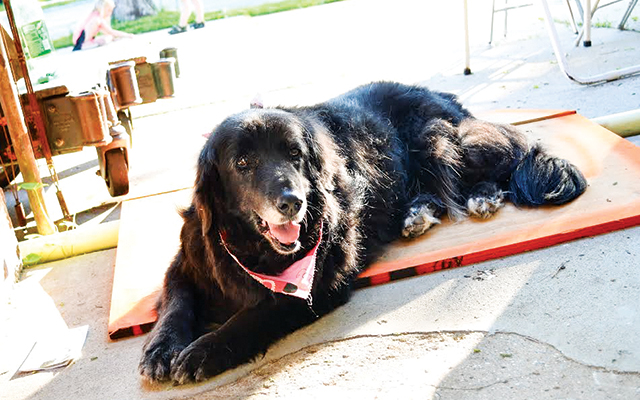 Let’s face it: as a community, we love our dogs. But the harsh reality is that senior dogs get a bad rap. Which canines are the first to get adopted? Puppies: the younger pooches with the big eyes, tiny legs, and paws and ears that are too big and require growing into. Science has tried to explain this cute effect: when traits associated with babies (and baby animals) are seen, it activates a part of the human brain that gives feelings of anticipation, excitement or the urge to cuddle or hold an object — it’s known as baby schema. Look it up.

But Mary Rollie, the visionary behind Vintage Dog Day, questions why senior dogs can’t be just as adoptable. Vintage Dog Day serves as a celebration of senior dogs and an opportunity for rescue organizations to get exposure for some of their older fosters.

“These dogs usually show a little gray in their muzzle or maybe a little hitch in their get-along,” Rollie says. “But what most people don’t see is a dog that already ‘gets it’. Housebroken? Check. Basic commands? Check.”

Rollie is a resident of Minneapolis’s Longfellow neighborhood, and she noticed vintage shops popping up every few blocks over the past three (or so) years. Now, the Minnehaha Avenue stretch is home to no fewer than eight vintage stores specializing in all things repurposed and/or secondhand. Her curiosity got the best of her and Rollie ended up walking into every shop; she quickly learned that each shop owner she spoke with had such an appreciation of the value of second hand, usually unnecessarily discarded, dog-eared but broken-in items that people trade off all too eagerly for the shiny, new stuff.

“They all had such a passion for the classics, I totally related with my passion of rescue dogs…especially the senior rescue dogs,” Rollie says. “I’ve volunteered with enough rescues to know that the older dogs get overlooked.”

So this self-described “rescue-dog-loving-kinda-nosy-neighbor” got to thinking. What better place to showcase available rescue senior dogs than a vintage shop? The idea sparked when Rollie met Julie Kearns, the owner of Junket: Tossed and Found, and her dog Nellie (a senior rescue dog herself).

“Nellie was a great fit for the shop and the corollary between an older dog with lots of love to give, and previously loved, older vintage goods with lots of character and quality, was one that stood out for me,” Kearns says. “I had dreams of hosting senior rescue dogs at the shop; Mary took it and made it an event that included all of the shops.”

Rollie adds, “So now I’ve met Julie, and of course Nellie, and Ella from E’s Emporium who loves the bully breeds, and Toni from Turquoise Vintage who grew up with boxers (my true love breed), and JoJo of Plum Crabby who is also a dog lover along with the rest of the Minnehaha Mile [shop owners]. And suddenly, the shops are generously fostering, hosting, and donating space and energy to some eager metro rescues! And all are benefitting from some amazing exposure!”

It began with a Facebook event page for the inaugural event in September 2014, complete with the participating shops and rescues, not to mention some great photos and bios of attending dogs. Rollie was able to pull in rescues with only three weeks notice — a sign that Rollie calls the event a success. In fact, it was such a success that Rollie, Kearns, and the other shop owners are gearing up for round two on July 18.

Each shop pairs up with a rescue organization, and the rescue brings an older dog(s) to meet and greet at each shop. Here is where things get even more fun — adoptions are encouraged!

Rollie says, “I’m just so pleased that the shops want to once again host some local rescues and get much needed exposure for the vintage dogs!”