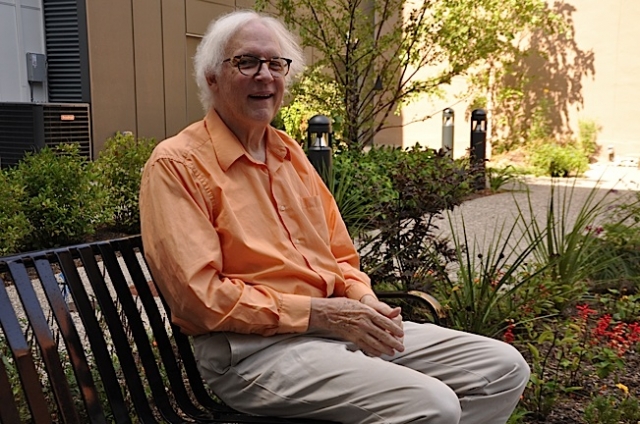 On July 4, 1965, John James traveled to Philadelphia to march among a group of gay and lesbian demonstrators calling for liberty for LGBT people. Nearly 50 years later, James is again surrounded by LGBT people in the City of Brotherly Love — this time in a very changed world.

Earlier this year, James, 73, moved into the John C. Anderson Apartments, an LGBT-friendly senior-living facility in the heart of Philadelphia — more specifically in the “Gayborhood” section. The building, just one of a few affordable LGBT senior-living complexes, is the largest publicly funded LGBT building project in the nation’s history. The complex is home to a vast cross-section of the LGBT elder community — businesspeople, artists, activists, researchers, social workers and everyone in between — who lived through, and at times led, the birth and growth of the modern LGBT-rights movement.

That movement is largely thought to have begun at the Stonewall Inn in New York City in 1969. But, four years earlier, a different sort of protest calling for LGBT freedom germinated on the steps of Philadelphia’s Independence Hall — fittingly, the birthplace of American freedom.

The 1965 Annual Reminder march was conceived of by Craig Rodwell and organized by such pioneering activists as Frank Kameny, based in D.C., as well as the Philly-based Barbara Gittings and Kay Lahusen. The demonstration was set for Independence Day to call attention to the notion that gays and lesbians were being deprived the basic rights guaranteed to them in our nation’s founding documents.

At the time of the march, James was a 24-year-old working as a computer programmer at the National Institutes for Health. He moved back to D.C., where he grew up, in 1963, after earning his undergraduate degree from Harvard University.

James’ father was a federal anti-trust attorney and he followed in his footsteps in seeking federal employment after abandoning his plan to pursue medicine.

“I was always interested in science and went to college intending to do pre-med but I decided it wasn’t for me,” he said. “I had a summer job at Sloan Kettering and just wasn’t impressed with what I saw there, with all the bureaucracy. So I figured I needed to make a living and got into computers; in those early days, there was no possibility of home computers but over the years things changed totally.”

James said he began coming to terms with his sexuality in his early 20s and, upon returning to D.C., joined the fledgling Mattachine Society, a “homophile” group whose Washington chapter was the brainchild of Kameny and Jack Nichols.

At group meetings, James said he was more of an observer, while Kameny and Nichols ran the show.

“Jack went on to be a well-known gay writer but, at the time, he used a pseudonym, Warren. His father was an FBI agent, and Hoover had a real thing about homosexuals. His father told him he’d kill him if the FBI found out about [his being gay], so we always used the name Warren,” James said. “So he and Kameny and some others came up with the idea for the demonstration.”

As plans began circulating for the Independence Hall picket, James said he decided to join up despite not being a strong backer of demonstrations.

“It was kind of the thing to do; I went along and did it because that was the thing to do right then,” James said, noting it was the first public demonstration in which he participated.

And, since the demonstration was in a different city, fears over being outed were lessened. At the time, James was only out to a small circle of family and friends.

Demonstration participants were asked to consent to having their photo taken, and he declined.

“It was more of a commitment for the local people, because they could be recognized, whereas those of us from Washington wouldn’t. But we were asked by photographers working with the demonstration if we wanted to be photographed, and I said no because I liked my job.”

At the time, the federal government largely operated under a policy of terminating “known homosexuals.”

“They would fire anyone who was known to be gay. I didn’t want to lose my job,” James said.

The federal policy also prevented James, who worked at NIH until 1967, from pursuing other federal positions — which he said ended up being fortunate.

“I never considered applying for a security clearance because they would’ve found out and that would have complicated things. But, I didn’t want to do military work anyway,” he laughed, “so not having a security clearance was one way to make sure I stayed away from that.”

In advance of the demonstration, organizers ensured that participants would both dress and act professionally.

“We all wore suits and ties. That was Kameny, that was his philosophy,” James said.

About 40 people participated in the inaugural picket and marched for about an hour-and-a-half behind a police barricade, holding such signs as “Homosexuals should be judged as individuals” and “Homosexual civil rights.”

James said there was “some degree of fear” about the public reaction to the demonstration, but they were met with no real pushback.

“People took it in stride. I didn’t notice any expressions of either hostility or support,” he said. “It turned out peaceful, we weren’t attacked by people in the streets or anything. Things could have happened, but they didn’t.”

While James stayed out of photos, it turned he may have been captured — in part — in a photo of Gittings that ran on the front page of the Philadelphia Inquirer.

“I suspect my leg is showing in the picture. But I’m not sure,” James said.

James only participated in that first event, but picketers returned each year for the next four years; the final Annual Reminder demonstration took place just days after the Stonewall Inn riots of 1969.

While the 1965 demonstration is now credited as being one of the first public LGBT-rights demonstrations, the weight of the event wasn’t as apparent at that time, especially since his activism focus was a bit different than that of the organizers’.

“It was kind of just matter of fact, I did this thing. I knew there was a symbolic importance at the time, but it wasn’t necessarily the kind of movement I would have done myself if I hadn’t been asked, but yet again I wasn’t an organization person anyway. So I went along with how Frank and Warren wanted to do it,” James said. “My philosophy was a little different; Kameny’s was to pick one issue and do just that issue, where my idea was to mix all the issues — antiwar, gay rights, civil rights, whatever you had the opportunity to do.”

James had the opportunity to put that philosophy into practice years later.

After leaving federal employment, James said he went out to the West Coast to have the customary “Haight-Ashbury experience” and, as the HIV/AIDS epidemic flourished in the 1980s, went on to found AIDS Treatment News.

In the beginning of the epidemic, the publication explored alternative medicine and experimental treatments and went on to publish more than 400 editions.

“When treatments were becoming available, no one wanted to cover it. So we were talking to patients, doctors, scientists. That was my main project,” he said, noting that he found his true passion laid in that type of behind-the-scenes activism, rather that the public nature of actions like the Annual Reminders. “I was never much into demonstrations so I think that, by far, my most important activism was AIDS Treatment News. That was my contribution. I like to work on long-term projects that don’t have a particular day where they culminate. I realize with demonstrations that they work to build up relationships, which is really important. And get publicity. Demonstrations help to get issues talked about that should be talked about, but that way just wasn’t my thing.”

After years of operating on the West Coast, living in San Francisco became unaffordable, and James packed up ATN and headed back east, deciding to settle in Philadelphia, where he had a number of colleagues and friends. ATN now operates as an independent project housed at Philadelphia FIGHT.

James returned to a city that, like most of society, views LGBT people in a wholly different light than in 1965. Illustrative of that is the city’s plans for a large-scale celebration next year to mark the 50th anniversary of the start of the Annual Reminders pickets.

“We never would have thought of any official recognition like that. That would have been inconceivable,” James said. “We were just happy to be more tolerated. We weren’t looking for anything out of the government besides just letting us live how we wanted to live and leaving us alone.”