I’ve always considered March 17, 1995, to be one of the luckiest days of my life. It was my first day working as Legal Program Coordinator at the Minnesota AIDS Project (MAP). After 12 years in private and corporate practice, I came to MAP wanting to give something back to my community. By this time, I knew many gay men living with HIV or who had died from HIV. One of my most beloved friends, Reverend Jon Nelson, was nearing the end of his battle against HIV. One of the last things he did was provide a reference for me for this position. I wanted two things: to make a difference and to ease the journey for those with HIV. I did not know I would work with and get to know so many beautiful people, learn amazing things, and see what a difference even the most basic legal services can make for people battling stigma and disease. 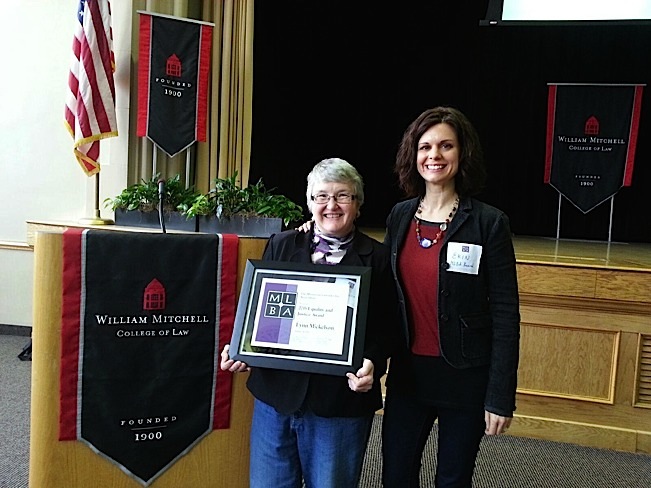 Lynn Mickelson, being presented with the 2015 Equity and Justice Award from the Minnesota Lavender Bar Association. The award was presented by one of her many former interns, Erin Keyes, now serving as the Assistant Dean of Students, University of Minnesota Law School. Photo courtesy of Lynn Mickelson

All Hands on Deck

From the beginning, a great cadre of volunteers delivered legal services at MAP. Our community rallied around people living with HIV to make sure their needs were met. In fact, my first day was spent interviewing candidates for a summer law clerk through the Minnesota Justice Foundation. Lori Ferris became my first of hundreds of law students to work at MAP providing legal services to our community. GLBT and allied lawyers and students have consistently provided more than a quarter of the legal services MAP delivers. These volunteers are critical. I learned early on the importance of providing sensitive and understanding legal services. As one man told me, “I want a lawyer who understands where I’m coming from. I don’t want to have to explain about HIV, how I got it, and about my partner. I don’t want to hide what’s real in my life.” This need has remained constant. People need culturally competent lawyers who appreciate the subtle nuances that can impact analysis and recommendations. Fortunately, MAP has a trove of volunteers who get it. I feel extraordinarily lucky to have a vast number of colleagues I can call upon to help our clients.

When I started at MAP, life expectancy from diagnosis to death was, at most, two years. Much of my time was spent doing end of life visits at hospitals, nursing homes, and in homes. People were caught by surprise and unprepared. I remember being at the bedside with a man named Richard who desperately wanted his partner to receive his insurance benefits. Even with me helping guide his hand, it took all his strength to sign the beneficiary form. I keep the thank you note from his partner in my office as a reminder of the importance of getting things done for people and as a testament of love. The love and tenderness between these two men was moving, as was that between high school sweethearts John and Steve who ended their lives in the same nursing home — together until the end.

Because our clients were often rejected by biological families, planning documents were crucial for medical decisions, property transfer, and wishes for funeral and burial. We saw several cases where the client’s wishes were in conflict with their family’s religious beliefs. Volunteer attorneys including Tim Piepkorn, Jeffrey Scott, and Curt Stine had to intervene to negotiate acceptable outcomes for surviving partners. Sometimes we didn’t get there in time and sat through painful memorial services condemning the “lifestyle” of the departed. In 1998, I was privileged to be part of a task force that helped create the new Minnesota Health Care Directive law. A key elective power in that document is giving authority to the agent to direct funeral and burial wishes.

I immediately saw the breadth of HIV’s impact. HIV is not just a gay disease. It is everywhere, especially in communities of color. Half of our clients were from communities of color. MAP was a safe place to come, away from the fear and judgment in the broader community. I learned quickly, especially from African American women and mothers who respectfully took me to school when it came to cultural competence. Despite difference in background, we found solidarity in the shared experience of HIV and our commitment to end it. I was particularly struck by the cross-generational impact of HIV when working with several HIV-positive mothers and their adult HIV-positive children, each helping the other identify their wishes and creating tools to make sure those wishes were followed.

There were many mothers who needed to plan for their young children. Because we were continually frustrated by parental wishes not being followed, volunteer attorney Suzanne Born and staff attorney Caroline Palmer helped draft our Standby Custody law in 2000. This law has become an invaluable tool in helping make sure a parent’s decision of who is the best custodian for their child is followed.

On the legal side, these cases taught me the importance of getting things in order. On the emotional side, many clients taught me the value of letting go of baggage and cherishing the moments we have together. Clients treasured the lawyers and other service providers who could appreciate their journeys and accept them as more than a person with a disease.

In 1996, everything changed when new medications called protease inhibitors came upon the scene. Suddenly, people living with HIV were coming back to health. Life expectancy grew dramatically. Individuals wanted to return to work. Others faced more of a chronic disease. One of the first things I noticed was an issue with debt. Losing work capacity resulted in a precipitous drop in income. Suddenly, people needed to figure out how to manage for the long-term on a limited income. Moreover, an HIV diagnosis no longer meant nearly automatic social security disability benefits. Our legal services shifted to disability planning — helping individuals get and keep health insurance, warding off creditors, and providing social security representation. Volunteers like Becky Moshier and Rebecca Schiller provided much needed financial counsel. Our goal was — and continues to be — to help stabilize lives through legal representation and enable optimal health outcomes. Although life expectancy for people newly infected and diagnosed with HIV is now almost normal, we have learned that HIV and its treatments cause premature aging. Treated HIV may not be killing people, but co-morbidities such as heart disease, diabetes, and bone disease are being seen in younger people who in turn are becoming disabled. Preventative legal services and timely intervention can make chronic disease management easier.

Throughout my 20 years, people living with HIV have been plagued by stigma and discrimination. Just before I started, MAP played a critical role getting HIV recognized as a disability protected under the Minnesota Human Rights Act. Early in my tenure, I worked with Lambda Legal Defense for a married client who applied for individual life insurance. The insurance company denied coverage because her husband was HIV positive. The Minnesota Department of Commerce quickly recognized the discrimination, and the company reversed its decision. We have seen numerous employment discrimination cases through the years with actions ranging from outright denial of employment or refusal to reasonably accommodate a worker to privacy violations and egregious harassment in the workplace. Working with government agencies, our program and volunteer attorneys such as Joni Thome, Celeste Culberth, Leslie Lieneman, and Bill O’Brien have greatly advanced legal protections for our community.

Until the policy changed in 2010, HIV-positive immigrants were barred from entering the United States due to their HIV status. MAP became the hub for HIV waivers that allowed people entry. Volunteers at Myers Thompson developed the waiver template that was used by immigration lawyers throughout the state. New immigrants came from places with terrible stigma and discrimination. These attitudes often persist in communities here resulting in disproportionate numbers of late diagnoses and new infections.

In recent years MAP has fought to clarify our state laws and protect people from HIV criminalization. MAP provided community education and representation when our knowing transmission statute became a concern. In 2014, volunteers Lindsay McLaughlin, Jerry Burg, and myself submitted an Amicus Curiae brief in the controversial State v. Rick case.

I’d like to say that with legal and health advances, stigma and discrimination against people living with HIV has lessened. It has not. Fear, misinformation, and indifference continue to result in stigmatizing and discriminatory acts for those living with HIV. Our long fight against HIV has shown us that we must stand in solidarity with one another and not leave anyone behind. I contend that until there is no fear, no stigma, and no disparities, lawyers will need to answer the call for justice in both gentle and dramatic ways. These 20 years have been a privilege, but my work is not done. The work of the Minnesota AIDS Project is not done.

For more information about the Minnesota AIDS Project, visit www.mnaidsproject.org.