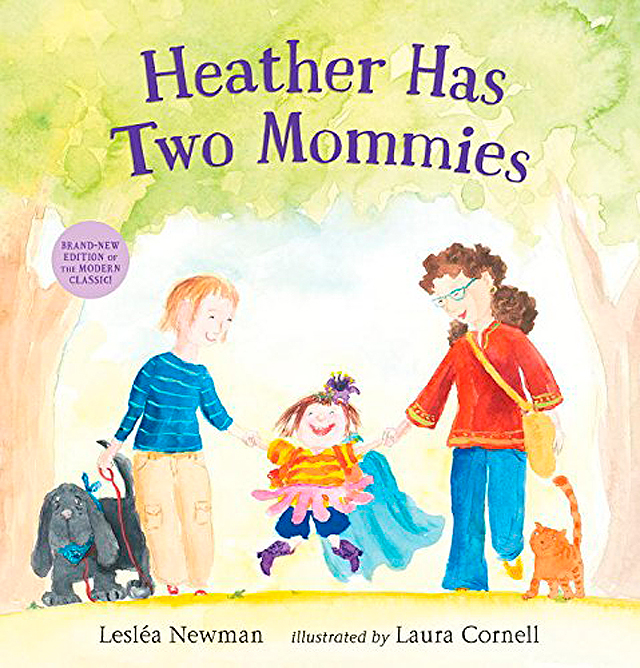 Twenty-five years ago, Heather Has Two Mommies was first launched into the world, starring a happy, five-year-old girl on her way to her first day of kindergarten. In the following decade, the picture book would go on to become one of the American Library Association’s top ten most challenged books of the 1990s.

This March, Candlewick Press will reissue Lesléa Newman’s landmark picture book, Heather Has Two Mommies, with brand new illustrations by Laura Cornell. Heather came into a world where same-sex marriage was not legal in a single state in the country. Today, she serves as a marker of how much America has changed, with 34 states and the District of Columbia issuing same-sex marriage licenses.

Newman wrote Heather in 1988 and sent it to about fifty publishers to no avail. Finally, Tzivia Gover, a lesbian mother who owned a desktop publishing business called In Other Words, decided to co-publish the book with Newman. Raising the bulk of the needed money with donations (most of which came in 10 dollar increments), Newman contributed the rest of the money and they found an illustrator.

Newman says, “I never dreamed that a book I wrote that came from such humble beginnings would be noticed, let alone banned, burned, defecated upon, read into the Congressional Record, written up in the New York Times, the New Yorker, and Newsweek, parodied by Jon Stewart and many others, and finally republished by a well-established and respected children’s book press.”

More important than all of the controversies that have swirled around the book are the reactions of children, who, after all, are the book’s intended audience. A lesbian mom told Newman that her son, Nick, crossed out the word Heather every time it appeared in the book and wrote in his name instead. Nick saw across gender lines and literally inserted himself into the story. This is only one of many stories of children reacting positively to the book.

Newman admits she has never met a child who had a problem with the notion that Heather has two mommies. “However, some adults (who forget the wisdom they had as children) have felt differently,” she says. “I hope that now, two-and-a-half decades after publication, Heather Has Two Mommies will not be seen as controversial and can continue to delight children and adults alike with its portrayal of the many different types of families that exist in our society today.”

As it did when it was first released in December of 1989, Heather reminds us of a timeless theme: “The most important thing about a family is that the people in it love each other.” Join Candlewick Press and Lavender in wishing Heather and her two mommies a very happy 25th anniversary!