Rainbow Resources: Back to School 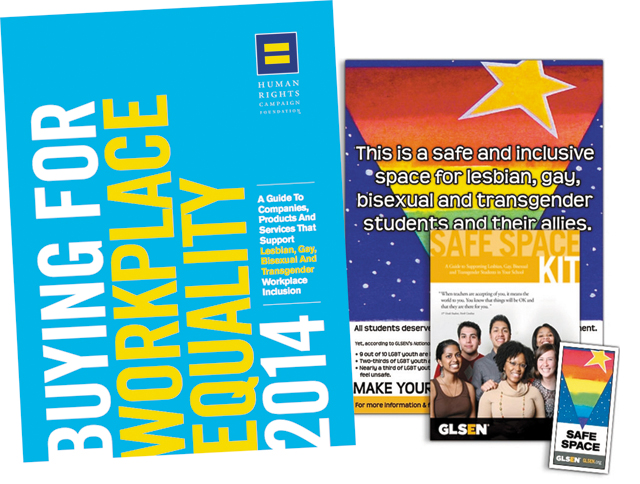 GLBT-Friendly Back to School Shopping Guide
As the school year draws nearer, retailers will stop at nothing to attract back-to-school shoppers. With all of the options, it can be hard to decipher which retailers deserve to be supported with a parent or guardian’s spending power; factoring in which stores and brands are GLBT-friendly is an even more daunting task.

Of the major retailers, shoppers will be happy to know that many have a 100-percent score from the Human Rights Campaign (HRC). According to HRC, “a record 252 businesses nationwide achieved a perfect score of 100 percent and 2013 saw the largest growth in the survey’s history with 54 new businesses participating.”

Despite the growing number of companies with GLBT-friendly policies, there are many that either actively discriminate against GLBT-identified people or haven’t filled out the HRC Corporate Equality Index (CEI) survey. The 2014 HRC Buying for Workplace Equality Guide (a concentrated version of the CEI survey) is divided into three categories: green, yellow, and red. Companies on the green list are the most inclusive with scores between 80 and 100 percent. Yellow companies are in the middle with scores between 46 and 79 percent and red companies have workplace equality scores between 0 and 45 percent.

According to HRC, “the businesses/brands that have not responded to the survey despite repeated attempts have been provided with an unofficial, estimated score based on publicly available information that has been collected.” Coincidentally, all of those businesses fall within the red category.

So where should parents and guardians who want to support GLBT-friendly establishments shop for their kids’ new backpacks, lunch bags, school supplies, clothes, and shoes?

A number of retail stores fell within the yellow category. The stores that received a 70 percent score include Overstock.com and the Jones Group (Anne Klein, Gloria Vanderbilt, Nine West and others). L.L. Bean earned 65 percent while Brown Shoe (Famous Footwear, Naturalizer, Dr. Scholl’s, and others) received 60 percent.

Only a few retail stores (with the exception of the companies that didn’t fill out the survey) had scores in the red category, including Ikea.

Download a copy of the Buyer’s Guide, get the smartphone app, and more at www.hrc.org/apps/buyersguide.

GLSEN Safe Space Kit
GLSEN (the Gay, Lesbian, and Straight Education Network) is the leading national education organization focused on ensuring safe schools for all students. Established in 1990, GLSEN works to create a world in which every child learns to respect and accept all people, regardless of sexual orientation or gender identity/expression. Through their work, GLSEN seeks to develop school climates where difference is valued for the positive contribution it makes to creating a more vibrant and diverse community.

The organization launched the Safe Space Campaign to place a Safe Space Kit in every middle and high school in the country and, between 2010 and 2013, they did just that.

The Safe Space Kit provides a program for action that school staff can take to create a positive learning environment for every student. Each kit contains:

The kit also shows how to assess the school’s climate, policies and practices, and outlines ways to advocate for change inside the school.

GLSEN says that the Safe Space Kit starts with a sticker. Placing a Safe Space sticker on an office door or window is a simple—but highly visible—first step that shows an adult’s unwavering support for a student’s safety. The kit also contains a poster that can be displayed throughout the school or on an office door to show support to GLBT students and let students know where their allies are should events of bullying occur.

However, sending one Safe Space Kit to every school is just the beginning for GLSEN. The work continues with supporting educators and GLBT students alike to make sure that every school is a safe and respectful place where students can thrive. Help make schools safer by purchasing a Safe Space Kit ($15) for yourself or an educator you know at http://safespace.glsen.org.

GLBT Scholarships
It only takes a Google search to turn up scholarships for GLBT-identified students or research areas. The six listed below offer a starting point for those seeking financial assistance to further their education. They range from general to incredibly specific, just to show the variety in scholarships available and just how tailored they can be.

Point Foundation
www.pointfoundation.org
Perhaps the largest source for GLBT scholarships is the Point Foundation. Point offers mentorship, leadership development and community service training to GLBTQ students. The Point Foundation provides not only money for tuition, books, and room and board, but also has a leadership program to help GLBT scholars succeed. From their website: “We pay particular attention to those students who have lost the financial and social support of their families and/or communities as a result of revealing their sexual orientation or gender identity.” Point Foundation awarded its first eight scholarships in 2002 and has since invested more than $15 million in the programmatic support of its scholars. The amount of Point’s annual scholarship support, which includes direct financial and programmatic assistance, averages $25,000 per scholar each year.

League Foundation at AT&T LGBT Scholarship
www.leaguefoundation.org
League Foundation at AT&T Scholarships are available to lesbian, gay, bisexual or transgender U.S. high school seniors who have demonstrated: a cumulative GPA of 3.0 on a 4.0 scale, significant involvement in community service, and acceptance to an accredited U.S. college or university. League offers $1500 scholarships and several special $2500 scholarships in honor of Matthew Shephard and Laurel Hester.

NWSA Lesbian Caucus Award
www.nwsa.org
If you are pursuing a career in social work and are interested in studying lesbians, the National Association of Social Workers Lesbian Caucus Award can set you up with a $500 research award to continue your work.