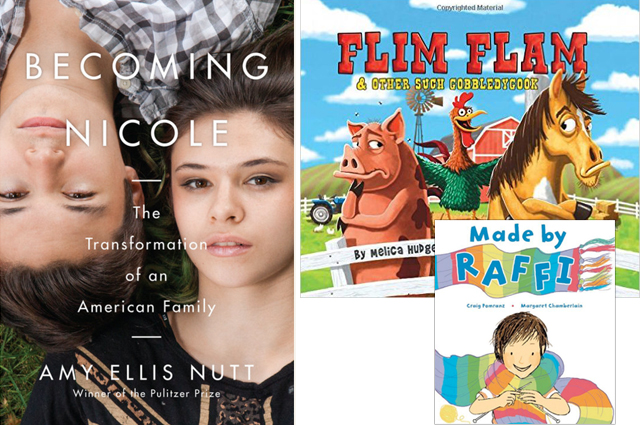 Flim Flam and Other Such Gobbledygook
$14.99

This new release from Cedar Fort Publishing is a lively kid’s book to teach children the importance of accepting everyone. This cute children’s book is about a bunch of farm animals that need to learn to get along.

After a big clean up of the farm, the rooster and the hen want to have a party and invite everyone on the farm, the only problem is no one on the farm likes each other because everyone is so different: some are loud, some are messy, and some have funny hair. Edwin Rooster decides enough is enough and gathers everyone around to talk to them about how it doesn’t matter what is wrong with everyone else. He tells them differences don’t matter and that they can be friends with everyone, even if they don’t all look the same. My favorite line from the book is:

“So if you hear film flam or gobbledygook, get rid of it quickly by hook or by crook!  Don’t let it botch friendships or ruin your day. Shoo it out! Hurry! It must go away!”

Melica Hudgens give us this adorable rhyming children’s book that reminds us the little differences don’t matter and we can be friends with everyone, even if we don’t all look or sound the same. Containing fun words to read, this book has colorful illustrations. It’s a perfect bedtime book to enjoy again and again.

Inspired by a true-life incident, Made By Raffi is the story of a little boy who likes to knit and sew — at first he is teased for his hobby, but in the end he becomes a hero to his class. The book is published in seven languages and distributed in ten countries so far by UK publishers Frances Lincoln under their diversity imprint, Janetta Otter-Barry Books. Award-winning artist Margaret Chamberlain is the illustrator.

Raffi is a shy boy who doesn’t like noisy games and is often teased at school. But when he gets the idea of making a scarf for his dad’s birthday he is full of enthusiasm, even though the other children think it is girly to knit. Then the day draws near for the school pageant, and there is one big problem: no costume for the prince. And that’s when Raffi has his most brilliant idea of all: to make a prince’s cape. On the day of the pageant, Raffi’s cape is the star of the show.

“I wrote the book to support young boys and girls who are perceived as ‘different’ because of their appearance or hobbies,” says Craig Pomranz, the book’s author. “It is a funny colorful book with a serious message and will interest those who care about promoting diversity and embracing our differences, as well as all children seeking to fit in.”

Becoming Nicole: The Transformation of an American Family
$27
Wayne and Kelly Maines adopted two twin boys, but soon after the parents noticed that Wyatt was different than Jonas. Wyatt, it turned out, was transgender and later transitioned to the woman that she is today — Nicole. The story of this family is being told in a book called Becoming Nicole.

Amy Ellis Nutt, a Pulitzer Prize winner, actually wrote the book thanks to access to “personal diaries, home videos, clinical journals, legal documents, medical records, and the Maineses themselves.” It doesn’t appear that Nutt holds back during this story but captures the true emotions of each person in the family. The book depicts the parent’s reactions to seeing Jonas as a young boy enjoying playing with “sports and trucks and many of the things little boys were ‘supposed’ to like; but Wyatt [Nicole] liked princess dolls and dress-up and playing Little Mermaid.” In fact, as a child, Nicole asked her parents when her penis would fall off.

The book details the parents’ struggle. Though Kelly was more easily accepting of Nicole’s transgender identity, Wayne, a Republican Air Force veteran, struggled to come to terms with his views about gender identity. Eventually he did and has become a voice for transgender rights. Nicole’s parents legally changed Wyatt’s name to Nicole before she entered fifth grade, but unfortunately it didn’t prevent bullying that occurred in school. Jonas, her twin brother, stood up for her many times against the harassers. The bullying became so bad that the family moved three hours away so that Nicole and Jonas could attend a middle school in a more liberal and large city in Maine where Nicole went “stealth,” and told no one of her transgender identity in fear of her safety.

Becoming Nicole is a beautiful story of an all-American family that grew with love and acceptance as Nicole grew into herself. This book is for anyone “who’s ever raised a child, felt at odds with society’s conventions and norms, or had to embrace life when it plays out unexpectedly. It’s a story of standing up for your beliefs and yourself — and it will inspire all of us to do the same.”

Youth living on the streets, in abusive homes, or in crisis situations in the Twin Cities can now to text someone for help. The Bridge for Youth in Minneapolis launched 612-400-SAFE in September. It is the first full-service crisis line in Minnesota.

Youth struggling with issues such as homelessness or sexual exploitation are able to text 612-400-SAFE. A trained volunteer or counselor will respond and offer access to support services.

The Bridge had to recruit at least 50 volunteers to staff the emergency response center. They are trained in how to respond to messages and offer emergency services, but Ali Kier, the youth response center supervisor, says their most important job will be to listen. “It’s just someone to talk to,” Kier said. “It’s not always necessarily looking for shelter.”

Bridge for Youth serves children age 10–17. It is the only program in the state that serves children that young. Counselors are available 24 hours a day, every day of the year. In 2014, 253 kids sought counseling services through the Bridge’s walk-in program. Trained volunteers answered more than 3,400 calls to the 24/7 crisis hotline and 400-SAFE will improve access to services and counseling.