Playing for the Other Team: Shannon Miller, and the Question No One is Asking 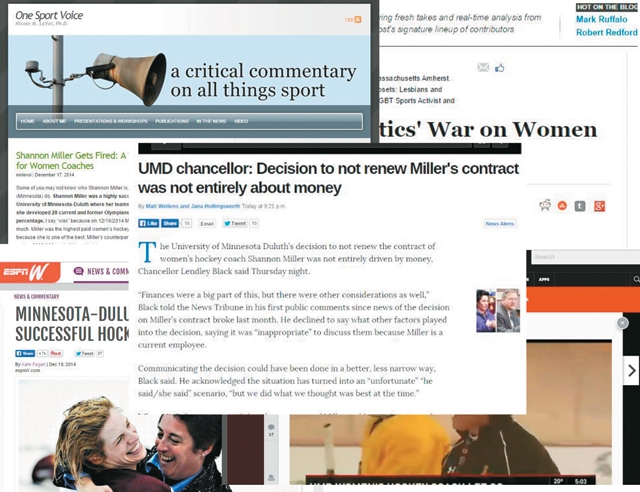 The State of Hockey is in a state of mourning.

The Wild, as of press time, is on a losing streak.

And Shannon Miller, Head Coach of the University of Minnesota, Duluth women’s hockey team, she of five national titles, ten NCAA playoff appearances, seven Frozen Four appearances and a Silver Medal as coach of the Canadian National Team in the 1998 Nagano Winter Olympics, was informed in December that her contract would not be renewed following the current season (along with the rest of her staff).

The move has prompted outcry not only in Duluth, where she is a local celebrity, but nationally, as the headlines scream sexism and cite Title IX.

Those articles make valid points. Miller was told she was being let go strictly for financial reasons, and UMD Athletic Director Josh Berlo was quoted by MPR News, saying “Today’s decision about Shannon’s contract was an immensely difficult and financially driven decision. Unfortunately, UMD Athletics is not in a position to sustain the current salary levels of our women’s hockey coaching staff.” Miller is the highest-paid female coach in the nation. Emphasis on female. Never mind the fact that the UMD men’s hockey coach, he of no national titles with the Bulldogs, a mediocre record, and no Olympic medals, makes $20k more than Coach Miller and is retaining his job.

So yes, I’d say some clear discrimination comes into play. But what type? None of the headlines ask what, to me, is the most obvious question. 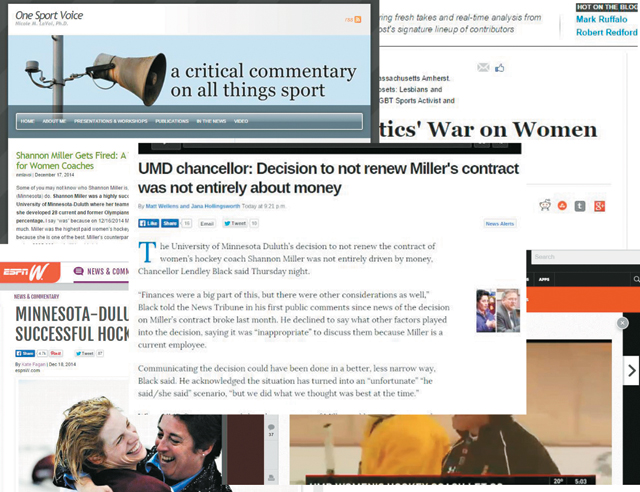 Is Shannon Miller being let go because she’s openly lesbian?

Now, I promise you, I’m not always the first to wave the rainbow flag and cry discrimination. When Michael Sam didn’t make the Rams final roster post-preseason, I blamed their solid depth at his position. He was picked up by the Cowboys practice squad and I assumed his NFL career would resume with a team who valued a former SEC Defensive Player of the Year. It wasn’t until he was dropped by the Cowboys and passed on by all remaining 31 teams in the NFL (many without any depth at his position) that I began to see that yes, homophobia was still at play.

However, as the news of Miller’s contract non-renewal made the rounds, nowhere was Miller’s sexuality a main talking point. Why? Is it because her counterpart on the men’s team is a straight male with a worse record and higher salary, so sexism is the easier (and safer) argument? Is it because she’s been out of the closet for so long that it begs the question “Why now?” Is it because we don’t believe that homophobia could so obviously exist in Minnesota in 2015?

Probably all of these, but just the fact that Miller and her entire coaching staff, the only all-gay coaching staff in the country to my knowledge, were let go as a group, without any opportunity to renegotiate contracts, as Miller has said she was open to, hints that money was not the primary decider.

UMD has since admitted as much. In an online article for Inside Higher Ed, “Chuck Tombarge, a spokesman for the University of Minnesota at Duluth, said that while Miller’s salary was a key consideration, there were other factors that went into the decision not to renew the coach’s contract, including ‘the direction of the program.’” In a statement echoed to the Duluth News Tribune by UMD Chancellor Lendley Black on Thursday, January 8, Tombarge said Miller was not offered a pay cut because “a pay cut alone would not have addressed all of the considerations” involved in the decision.

Miller spoke to the media at her weekly press conference at Amsoil Arena later in the day on the 8th and addressed those revelations.

“I want to be clear and I want to be honest, in all the meetings I had with Josh (Berlo)—and we talked about it five different times—the only reason I was given is financial. Strictly financial. And those were his words over and over again, consistently. So it’s disappointing for me to read somebody saying, from the institution, or a spokesperson, saying, ‘We weren’t happy with the direction of the program.’ That’s disturbing to say the least—that a spokesperson would say something like that, and Josh wouldn’t have the courage to have that conversation with me if it is a concern.”

Miller has hired attorneys to represent her in an upcoming lawsuit, and most likely, they’ll make a case citing Title IX as well. It’s difficult and probably impossible to prove homophobia without evidence. But that doesn’t mean that we, the public, can’t be suspicious. And I certainly am. Josh Berlo is a new athletic director and new to Duluth. Shannon Miller is a strong and successful lesbian coach with a 17-year history in the community.

Miller is a living legend in the world of women’s hockey, with a winning percentage over .700 and a team currently ranked 6th in the nation. She was the draw to the UMD women’s hockey program. As this story continues to unfold, my eyes are turned north.