Playing For the Other Team: Q & A with Kye Allums 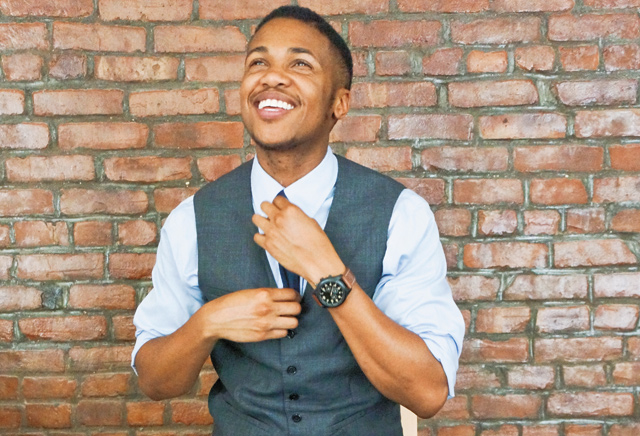 While the Minnesota State High School League has been making the news preparing to vote on a policy for transgender students who wish to play sports, one of the nation’s pioneer transgender athletes has returned to his home state. Kye Allums was the first openly transgender NCAA Division I athlete, playing basketball for George Washington University in Washington, D.C. in 2010. A native Minnesotan and former Miss Basketball Minnesota candidate, Kye attended both Highland Park and Centennial High School prior to college. Kye has recently been listed by TIME Magazine as one of 21 Transgender People Who Influenced American Culture, and can now been seen in Laverne Cox’s [Orange is The New Black] MTV documentary, The T Word. Kye is the founder of Project I Am Enough. He took a moment to speak with Lavender about his experiences, and his thoughts on the MSHL’s upcoming vote.

Tell us about the experience of playing as an openly transgender athlete at George Washington University. Did you feel any additional pressure being open about who you were?
Kye Allums: The only thing that changed for me when I came out as transgender was people staring and pointing whenever I would walk on the court. For the most part, people treated me just like they had been prior to my coming out. Like a basketball player. Some schools would offer me a separate space to change and shower during away games. That was nice. I felt equipped to handle any scrutiny because of the support I had from my teammates, coaches, and close friends.

You’ve just been featured in Laverne Cox’s documentary, The T Word. How did she approach you to participate in that project?
KA: Producers reached out to me a year or so ago, to see if I was interested in being a part of a documentary they were working on. I wasn’t sure, so I took some time to think about it. They reached back out earlier this year, and told me that Laverne was going to be one of the Executive Producers. Once I heard that, I felt more comfortable being part of the project, as I knew she would make sure that our stories were told in a respectful way.

Tell me a bit about your experience filming.  What was it like working with Laverne?
KA: We filmed over the course of a few days. It went by very quickly. I’ve known Laverne for about three years now. She is an amazing person, who I have so much love and respect for. Working with her was everything! I never thought I would see a day where Laverne and my mom would have a conversation about gender and pronouns. It was an unforgettable experience.

What was your motivation for founding Project I Am Enough?
KA: I started Project I Am Enough to create a space where LGBTQ people could come to share their I Am Enough stories. Being comfortable in my own skin is not an easy thing. It’s a day-to-day struggle to continue reminding myself that I am enough for me, and that there is nothing wrong with who I am. It’s easy for me to tell others that they are enough, but when it comes to myself, that’s another story. It’s a work in progress though, and I realize that, which is why I have come home, and will now be dedicating a lot of my time to strengthening my enoughness. I want to go back to school next year to pursue a degree in women and gender studies. I am applying to a few graduate programs in Minnesota. I don’t know yet what career I want to pursue. My focus right now is just getting into graduate school and starting there. I am taking time to get to know myself outside of activism by spending time with close friends, family, exploring Minnesota and what it has to offer.

What is your life like now?
KA: There are things I’m working on with my identity: gender, sexuality. Right now, I am questioning my gender identity…but I am leaning more toward Genderqueer. That identity is growing on me. To me that means being exactly who I am without placing limits on who I can and cannot be. Genderqueer gives me the freedom to be as fluid as I want to be. I’m also figuring out what it means to be the right kind of activist/advocate.

Can you explain?
KA: I put a lot of pressure on myself to do everything and help everyone before I help myself. I jumped straight into this work before taking time to really get to know myself. So I have decided to take a break, to figure out what being an activist looks like for me.

You might have heard that here in Minnesota, the Minnesota State High School League (MSHSL) is voting on a transgender athlete policy. There has been controversy, of course, and The Minnesota Child Protection League (MCPL) paid for a full-page ad in the Star Tribune that said: “A male wants to shower beside your 14-year old daughter. Are YOU ok with that?” They’ve decided to delay voting on this policy, which is still only a recommendation for school districts, until December. Some are worried it doesn’t offer transgender athletes enough protection, such as specifying appropriate dressing rooms. What are your thoughts?
KA: I was very disappointed to see that ad ran in the Star Tribune, but seeing that there was immediate backlash from outraged subscribers made me feel good, and supported, that many people were not okay with that anti-trans ad. I hope that the pending trans student policy gets passed when they vote in December, as I believe that everyone should have a right to play on a team that coincides with their gender identity.

When I came out as trans*, my college offered me an additional space to change in the event that being in the women’s locker room made me uncomfortable. I was happy that they provided me with an additional option, but I was perfectly fine changing with my team. Being openly trans* didn’t affect how I felt about using a locker room. I was more concerned with how my teammates felt, and they were all cool with me remaining in the locker room, as I had been using it for two years prior to coming out publicly. Every trans* athlete will not feel as comfortable as I did. I think that offering that additional space for trans*/gender non-conforming athletes to change is very important, and should be mandatory.

To see more of Kye in The T Word, visit MTV.com.  Hosted by Laverne Cox, this one-hour documentary takes viewers inside the lives of seven trans youth. Ranging in age from 12 to 24, with varying levels of parental and social support, the film explores each individual’s journey as they try to overcome challenges including coming out, bullying, dating, and anti-transgender violence.