Q & A with National Coming Out Day Speaker Judy Shepard 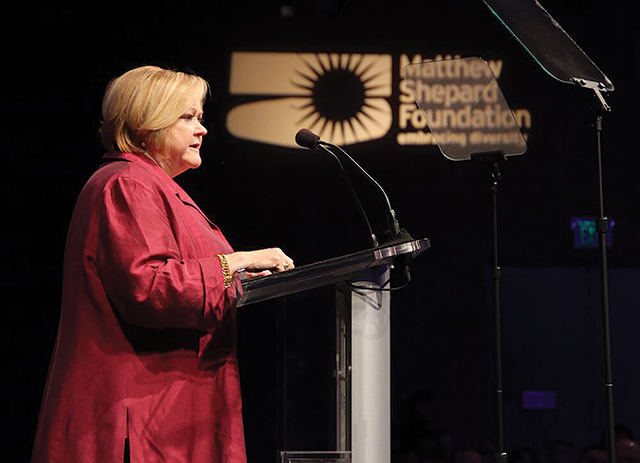 In 1998, Judy Shepard lost her son Matthew to a murder motivated by anti-gay hate in Laramie, Wyoming. Since then, she has become a leading voice in fighting for the rights of this community and established The Matthew Shepard Foundation to carry on her son’s legacy as well as spearheaded The Matthew Shepard Act, which expanded the federal hate-crime law to include crimes based on gender and sexual orientation. She is coming to Minneapolis to speak at Quorum’s National Coming Out Day luncheon on October 11, 2017. In preparation for her visit to Minneapolis, I asked her a few questions.

As someone who is barely younger than your son, Matthew, I’m familiar with his—and your—story because he was a contemporary of mine. It’s part of my own canon. How do you introduce yourself to younger people or people who’ve never heard of you or Matthew? In essence, how do you come out?
It always depends on the unique circumstance of the meeting. If it is a public appearance, we know there is likely at least a minimum of knowledge and we try to fill in the blanks in our introductory remarks. If it is a social meeting, we will mention the Laramie Project or the documentary Matt Shepard is a Friend of Mine—both seem to be part of pop culture now.

What is Matthew’s coming out story?
He was a freshman in college when he came out to me over the phone. We were living in Saudi Arabia at the time so the call was in the middle of the night. He said, “Mom, I have to tell you something.” I asked what would that be and he replied, “I am gay.” My response was, “What took you so long to tell me?” I think he was surprised that I had any idea that he was gay but I had had a feeling that he might be gay since he was eight. He asked me not to tell his dad—he wanted to do it in person—and I agreed but told him anyway. I knew I had to tell Dennis because he has a tendency to speak before he thinks and I didn’t want him to say something that would hurt Matt out of surprise. His reaction was, “No, Matt is not gay, he just hasn’t found the right girl yet.” My response to him was, “No, it isn’t about finding the right girl, it is about finding the right man.” Dennis was taken aback I think but rejection was never an issue. Matt was Matt nothing had changed.

What is the Matthew Shepard Foundation and who does its programs benefit?
The Matthew Shepard Foundation is the organization Dennis and I founded shortly after Matthew’s death in 1998. We received so many letters and teddy bears, so much money, and knew something had to be done on his behalf. We are almost in our 20th year of the Foundation and continue to speak around the country to youth, law enforcement, employee resource groups, and the occasional government group. We go wherever people will have us. Telling Matt’s story and the stories of so many others who have lost their lives to hate is paramount to making sure it happens less and less. “Erase Hate” is our motto and I think that benefits everyone and anyone. 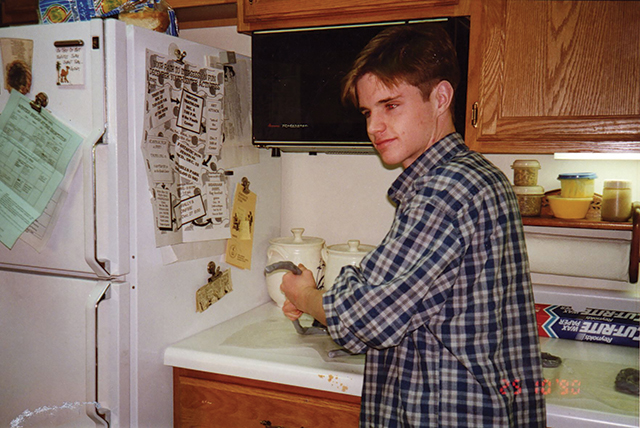 How do you see coming out fitting into that mission to “Erase Hate?”
Erasing hate is broad, but we did that intentionally. This is for LGBTQ youth, people of color, religious minorities, or anyone who has experienced discrimination. Words often turn into violence, and if we can teach one person at any event we attend that hate is learned and our natural instincts are to love, then maybe we can save a life or two in the process, as well. Coming out and being your authentic self helps, showing that anybody in the rainbow spectrum is worthy of love and just because they love differently than the “norm” doesn’t mean that they deserve to be discriminated against. Authenticity over aspiration is really something that makes a difference. Boys are taught that they have to stuff their feelings in order to be men. Girls are taught that they have to fit into a certain mold in order to be worthy of love, and that just isn’t true. It’s never too late to be yourself. There are people who come out in their 80s and I commend them for it!

What words of advice do you have for handling hate? Do you have any resources you’d recommend for people whether in schools, churches, the workplace, or in their own families?
Meet people where they are. Figure out why they have a preconceived notion of whatever is causing them to be hateful. More often than not, it’s a misconception and that authenticity can help them see that we are all equal. In this political climate, it has become much more difficult, but you have to be an optimist in order to believe that our work is effective.

Check out MatthewShepard.org. We have a lot of resources to help. ADL, GLAAD, GLSEN, and HRC also have great materials for helping erase hate.

For more information about the National Coming Out Day luncheon at which Judy will be speaking, go to www.twincitiesquorum.com.