Minnesota Pride Rotary Club – An Update On a Classic 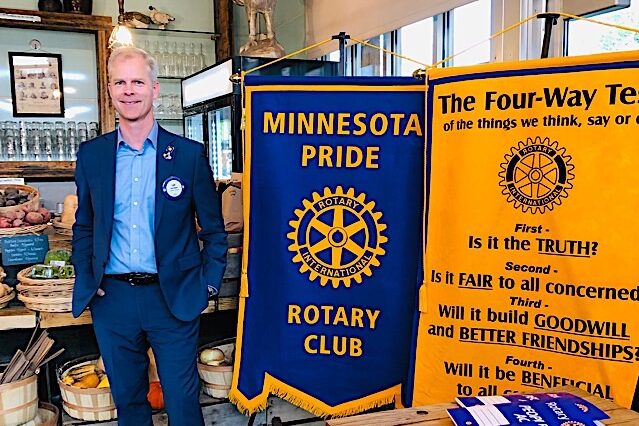 The first thing I notice when I walk into Leif Hagen’s office at Achievement Financial was the collection of paintings displayed on the back wall. They’re by artists from all over the world—a nod to his love of traveling and the great enthusiasm he has for humanity. An Eagle scout from Steven’s Point, WI, Hagen is the father of three daughters and has been involved in the Eagan Rotary Club for 15 years. He’s a St. Olaf College alum, and after teaching abroad in both Switzerland and Japan, moved to Eagan and eventually founded his investment firm, Achievement Financial, where he guides people through the process of retirement planning, health insurance and Medicare. He speaks four languages and served two terms as president of the Eagan Rotary Club before agreeing to help found an LGBTQ+ chapter; Hagen came out as gay four years ago, and new perspective brings new opportunity.

Hagen’s involvement with Rotary started as a networking opportunity that immediately became centered around service. “It’s about giving back my time, talent, treasure, serving my community,” he says. “For me it’s about the world: I went to my first Rotary International convention in Birmingham, England, when I was club president elect back in 2009. I met people from around the world—it’s like you’re at the United Nations. Then in 2010 I went as a Rotary exchange team leader to India for four weeks where we did homestays with Indian Rotary families and saw a lot of different service projects.”

Rotary International was founded by Paul Harris in Chicago, 1905, as a way for professional men to network and form friendships. Soon after formation, they began looking for ways to give back to their communities, and the mission of humanitarian service became central to the organization. In 1911, “he profits most who serves best” and “service above self” became Rotary Club mottos and by midcentury were adopted officially. One of the first public service projects Rotary accomplished was installing public toilets—“city comfort stations”—in Chicago to improve sanitation in the city streets. In the years since, Rotary International has grown to 1.2 million members worldwide. They provide scholarships and grants for youth exchange programs, as well as funding for local service projects like bridges, schools and wells. One of the main issues of focus for Rotary International has been the eradication of polio, which is now only present in two countries worldwide: Afghanistan and Pakistan. Other areas of focus include human trafficking, environmental concerns, and access to education and clean water.

As a global organization, Rotary has centralized leadership, but each district can be home to many individual Rotary Clubs. Our district has more than 60 clubs, each with its own unique goals. Although Rotary has existed for more than a hundred years, at present there are only two specifically LGBTQ+ clubs in the country. The MN Pride Rotary Club would be the third in the U.S., and the first in Minnesota.

Hagen has three goals for the MN Pride Rotary Club: to bring more diversity to Rotary, to bring new members to Rotary, and most importantly, to let the LGBTQ+ community know that this opportunity exists and that we are wanted and welcome. As what will be the third LGBTQ+ club in the U.S. and the first in Minnesota, he’d like to see this club grow to respond to the needs of the community and inspire the chartering of other LGBTQ+ clubs: “I want them to look at us and say, wow, they do really great work.” The kickoff event for MN Pride Rotary Club was in August, and they hold regular meetings at Wise Acre Eatery in South Minneapolis, an LGBTQ-owned farm-to-table restaurant. MN Pride Rotary Club has decided to focus first on helping homeless LGBTQ+ youth in the area—and to have a really good time doing it. From signature cocktails created by local mixologists to drag performances over brunch, Hagen is excited to not only bring LGBTQ+ members to Rotary, but to give Rotary itself a bit of an update as well.

In partnership with the Aliveness Project in South Minneapolis, they’ve organized a food drive on November 17th, and their second service project will be on December 8th—a coat drive at Wise Acre Eatery in collaboration with Avenues for Youth. Everyone is welcome at these events; watch the MN Pride Rotary Club Facebook page for meeting information and to submit your RSVP. Events where food is provided are $20 to attend, and if you decide to become a member, dues are $250 annually.

For many of us in the LGBTQ+ community, there may be some hesitancy to join such a traditional, historically male institution, and Hagen acknowledges that. “I’m hoping to open the door,” he says. “Everyone is welcome—LGBTQ+, allies, everyone.” But some Rotary traditions, such as the invocation often given at meetings, may not resonate with LGBTQ+ people, especially those who have had negative experiences with similar institutions in the past. MN Pride Rotary Club meetings begin instead with a toast emphasizing action and celebration. It’s small but effective changes like these that Hagen hopes will help Rotary evolve and continue to grow, providing “friendly and interesting fun for the LGBTQ+ community” while also offering an existing infrastructure for community service. “I’ll give it my best St. Olaf College try,” he says, smiling.