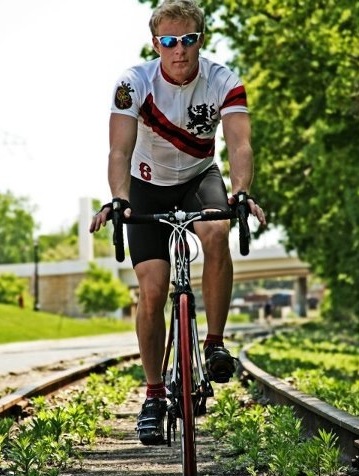 On Friday, June 1, JD Olson, an airline pilot living in the Twin Cities, left town on his bicycle for a 1,000-mile ride coordinated with Minnesotans United for All Families. JD’s mission, called the Minnesota Freedom Tour, aims to raise money and inspire conversation around the marriage amendment on the state ballot in November. He hopes to raise $10,000 and spark 3,000 conversations before his ride concludes June 17.

JD’s ride will take him to some of the places we need him the most. Per Minnesotans United for all Families, he’ll travel from the Twin Cities, north through the Iron Range, and across the state to East Grand Forks before heading down through the heart of the state, through Olmsted County, and back up to finish where he started.

If the ballot measure passes in November, an amendment banning gay marriage will be added to the state constitution. Despite recent national polls showing an increase in support for gay marriage, the evolving national attitude hasn’t translated into votes. In all 32 states that have had ballot measures similar to Minnesota’s, voters have voted against gay marriage.

For more information about JD’s ride and to support his mission, visit the official website: Minnesota Freedom Tour: JD’s Ride.

My name is JD. I’m an airline pilot living in Minneapolis. I fly, I bike, I root for the Vikings. I’m like a lot of Minnesotans. And I’m gay. I grew up on a farm in rural North Dakota. Like many guys my age, I joined the football team in high school – I wanted to play sports, but I also wanted to make a connection. It didn’t happen. I didn’t fit in anywhere. Neither in sports, in school, nor at home could I find anyone to really identify with. The isolation that I felt as a gay man in that rural town was deafening.

I started flying when I was 16. It was my release. It was how I was able to escape the world around me where I felt so lonely. I needed to leave so I could find a place where I fit in, where I could live my life true to myself. I could have lived in rural North Dakota my whole life but most likely would never have found love. I would probably be criticized for being single or for not living the life others wanted me to have. The isolation that I felt would have remained.

I have found a home and a sense of community living in Minneapolis. I no longer feel isolated and lonely. But now the feeling of isolation threatens to return with a proposed amendment to the Minnesota constitution. This amendment would directly affect my life. It would affect the lives of my friends, the people I love, and the people I don’t know but feel a kinship with.