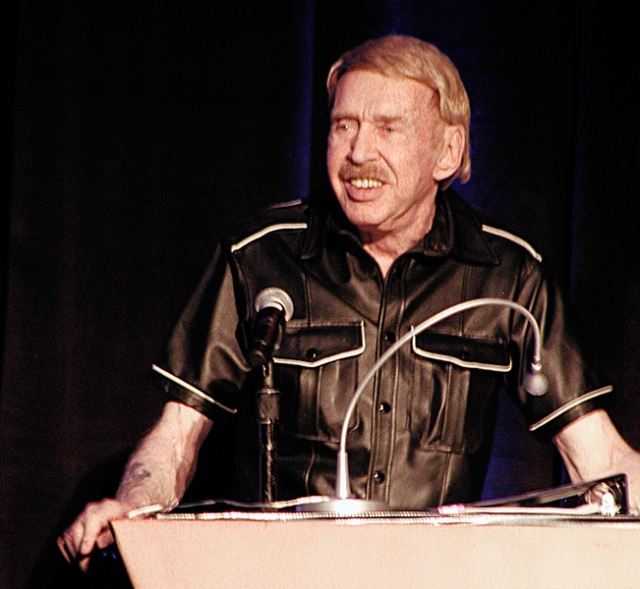 It’s an election year. And Chuck Renslow, founder and executive producer of International Mr. Leather and co-founder of the Leather Archives & Museum, would like to have a word with you.

On Sunday, May 27, at the beginning of this year’s International Mr. Leather Contest and Show, Renslow made a speech in which he first implored audience members to document their personal history for the Leather Archives & Museum: “If it’s not recorded, it cannot be saved.”

Then Renslow’s speech turned to politics: “A few weeks ago during an election year, when it could hurt him the most, President Obama became the first president to champion gay marriage.” This statement was met with over twenty seconds of wild cheering and applause from the audience. Then Renslow continued:

“As you can imagine, the right wing conservatives are energized. And the only way to offset them is to become energized ourselves. More than any other time in your lives, you need to become active and involved in the campaign for the President of the United States.”

“We need to re-elect President Obama this year. This year, the choice is between a history-making man who stands up for the gay community and tells the world we must have civil rights, or—or, if he is defeated, we will live under Mitt Romney, a self-described Mormon conservative who believes that marriage is for one man and one woman—even though at one time his religion espoused marriage between one man and several women.”

“Now, in general, I support religious freedom and the freedom of choice. But when your freedom is used to deny me my freedom, you no longer represent me or my people.”

“If you are not actively involved in helping to re-elect President Obama, you absolutely need to do it. Nothing less than the future of our civil rights is at stake.”