A panel discussion on the inclusion of trans and nonbinary people, especially as members of the leather/BDSM/fetish community, was presented Nov. 3 at eagleBOLTbar. Panel members were Whiskey Sickmann (he/him), Anastasia Snow (she/her), and Rylee Sickmann (they/them), who is the current Mx Minnesota Leather Pride. The panel was moderated by Junior Avalos (they/them), campus and organizing coordinator for OutFront Minnesota. 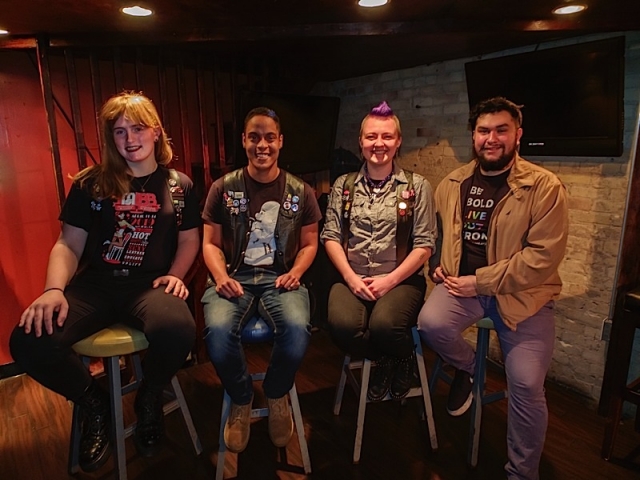 The discussion was an inclusive and safe space for everyone, of all gender identities, to respectfully ask questions, share information and feelings, and learn how to create more such safe and inclusive community spaces. Following are some takeaways from the discussion.

Definition of terms: Trans people (transwomen or transmen), as Whiskey explained, don’t identify with the sex they were born with: “I was born female and don’t identify as such any longer.” Rylee identifies as both nonbinary and genderqueer, terms that “fit best for me because I feel like I have a lot of both masculine and feminine traits, and don’t necessarily fit real nicely into either one of the boxes of man or woman, but more somewhere in the middle.” Also according to Rylee, a person who is agender doesn’t identify with gender at all. Cis, or cisgendered, people are those who identify with the sex they were born with. (In case you’re wondering, “cis-” is a Latin-derived prefix meaning “on this side of” or “on the same side of.”)

Transitioning is more than hormones and surgery. Transitioning has both medical and social aspects. Generally, people transition socially before they transition medically.

Don’t say “preferred pronouns.” Asking someone about their “preferred pronouns” insinuates that gender is a matter of choice, and it’s not—just as I would never say I “chose” to be a gay man who is attracted to other men. So skip the “preferred” and simply say “My pronouns are,” or ask someone, “What are your pronouns?”

“Passing” can be complicated. For a transwoman or transman, “passing” means other people see them (specifically their gender) as they see themselves. But Rylee noted that “there really is no way to pass as non-binary. If I’m walking down the street, somebody is likely to perceive me either as female or male.”

“Passing” can be a safety issue. Trans people who have more “passing privilege” are less likely to encounter the transphobia, and sometimes violence, experienced by people who are not perceived as their gender or are perceived as trans. However, not every trans person is concerned with passing, or even wants to pass.

“Stealth” is a subset of “passing.” A trans person with a lot of passing privilege can “live stealth,” meaning they are not immediately perceived as trans. Living stealth can be easier and safer in certain situations. But some people don’t have the option of living stealth. For example, Rylee noted that “There is no stealth non-binary. It’s just not a thing.”

If you know someone is stealth, keep quiet about it. Whiskey admonished that “If you are a cis person and you know a trans person who is stealth, or you find out a person is trans but stealth—shut up about it. Don’t say anything to anyone else. If you hear other people talking about it, tell them, ‘Hey, they’re stealth, don’t share that information.’ It’s dangerous. It can get them hurt or killed. It’s not your information to share—it’s their information to share.”

Rather than assume what someone’s pronouns are, ask. It’s part of getting to know someone. People at the discussion suggested asking “What do your friends call you?” or just a simple “What are your pronouns?”

If you use a wrong pronoun for someone and they correct you, apologize. But don’t get too flustered about it. Humans are not perfect, and sometimes even trans people use the wrong pronouns for other trans people. If someone cares enough to talk with you about their pronouns, their goal is simply to give you that information—it’s not meant as an attack (as long as you were not trying to be hurtful or disrespectful).

Maybe you don’t need gendered pronouns at all. There are workarounds. Use someone’s name instead of a pronoun. Say “Good morning” and “thank you” without adding “sir,” “ma’am,” or another gendered word to the end of what you say. It takes practice, but it’s possible. (For years, this column has used the singular “they” as a gender-inclusive pronoun.)

Leather spaces can be safe spaces for trans and nonbinary people. One audience member pointed out, “It’s worth remembering that a lot of us who are going through the early parts of our transition are often also re-exploring our sexualities. A lot of us know that in leather spaces there are rules, there are conventions, and there are people who will step in and stop things from going wrong.”

“Just be respectful.” That’s how Whiskey put it, adding, “Yeah, that’s kinda what it boils down to.”