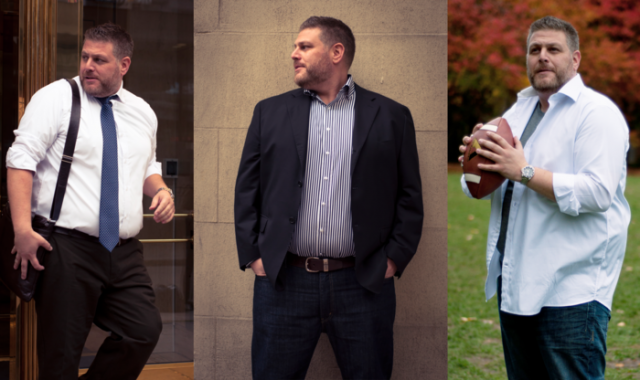 Parker & Pine Premium Dress Shirts
New Brand for Big Men
Deadline: December 19
Kickstarter
If you’re a big guy, you know exactly what the problem is. Walk into any mall, and you probably won’t find a lot of brands that make shirts in your size. They also usually look baggy and outdated. Aren’t you tired of being ignored by the fashion industry and want the option of keeping your style up to date?

Everything from the fit to the fabric and styles of these shirts was created by getting big guys of all sizes around a table and talking about what a great fitting shirt would look and feel like. From picking the cuffs to adjusting the fit of the shirt for improved wear, we had participation at every level.

The company has been working on these shirts for the past year and thinks you’ll want to pledge for a couple of reasons: 1) Committed to changing the way clothes are designed for big men. By pledging, you are joining in the movement to create great clothes that are specifically created for the big man. 2) Want your input. Ideas on new colours or patterns for the shirt? Talk to them. They developed these shirts by listening to men. 3) Didn’t want to compromise on quality, because quality is just as important as fit and style. Therefore they have partnered with a manufacturer that’s been making shirts for several established brands.

Video Testimonies
Deadline: December 31
Indiegogo
To commemorate World AIDS Day, on December 1, The Lavender Effect, a nonprofit in association with Community Partners, launched a campaign. Funds raised during the month of December will be used to record video testimonies from GLBTQ and allied citizens who were integral participants in the AIDS/HIV epidemic from the mid-1980s to present. Utilizing guidelines developed by Steven Spielberg’s Shoah Holocaust documentation project, these videos will be utilized for educational purposes through classroom presentations, educational workshops, and interactive exhibits.

The Lavender Effect assembled a notable group of AIDS/HIV survivors and advocates to appear in the Indiegogo campaign including early AIDS activist and actress Alison Arngrim (Little House on the Prairie’s Nellie Oleson) who became one of the most visible AIDS advocates in Hollywood when her beloved Television husband, actor Steve Tracy, was diagnosed with AIDS in 1984; Robert Schoonover, former Director of the AIDS Hotline in Los Angeles from 1984 – 1993; longtime survivor/advocate Steve Pieters, former Metropolitan Community Church AIDS Ministry Global Field Director; and survivor/advocate Jack Inman, emotional support facilitator for the Life Group, Los Angeles.